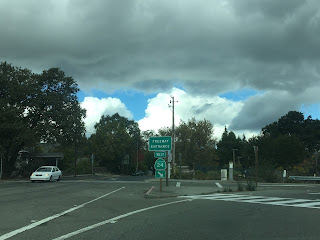 CA 24 is a 13.5 mile east/west freeway between I-680 at Walnut Creek in Contra Costa County to I-580/I-980 at Oakland in Alameda County.  CA 24 is one of the original 1934 signed state highways but also is the most truncated which still exists.  CA 24 in it's full 1935 scope began at US 40 in Berkeley and crossed the Sierra Nevada Range to what is now US 395 near the Nevada State Line.  What was one of the grandest State Highways in California is now primarily a commuter route for traffic heading into the Bay Area through the Diablo Range. 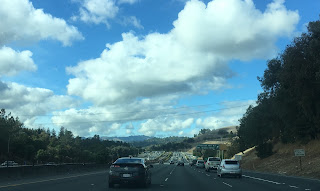 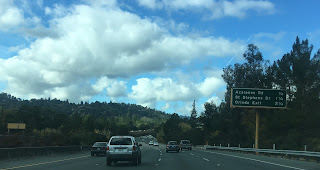 CA 24 traverses through the Caldecott Tunnel which has four two-lane bores.  The first two bores carry the eastbound freeway and were completed back in 1937.  The third bore which is now the southern westbound lanes opened in 1964 with the final bore I traveled through in the picture below opened in 2013. 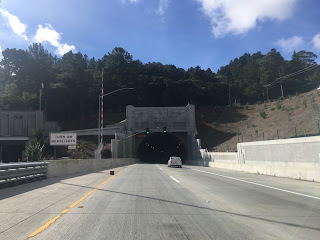 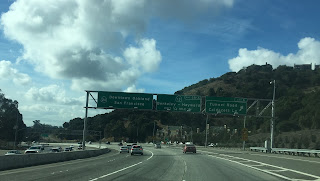 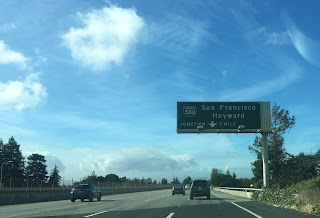 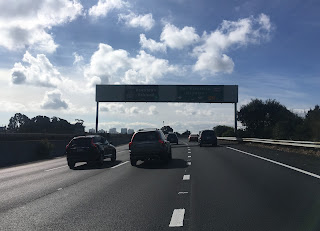 Prior to 1970 CA 24 took the current alignment of CA 13 north of the Caldecott Tunnels westward to US 40 via Tunnel Road and Ashby Avenue.  The segment of modern CA 13 was part of Legislative Route 206 which designated by the State Legislature in 1935 according to CAhighways.org.  Apparently when CA 24 was designated in 1934 terminated in Sacramento but was extended to US 40 on San Pablo Avenue in Berkeley via LRN 11 and LRN 75 in 1935.

LRN 75 in 1935 carried CA 24 from CA 21 at Main Street in Walnut Creek westward on Mount Diablo Boulevard to LRN 206 via Old Tunnel Road and it's 1903 era tunnel to Tunnel Road.  As stated above the first two bores of Caldecott Tunnel were completed by 1937 which eliminated the large mountain grade that separated the Oakland area from Walnut Creek.  LRN 75 continued unsigned on Broadway west to US 50.  CA 24, LRN 206 and LRN 75 can be seen on their original configurations through the Oakland area on the 1938 State Highway Map City Insert.

Regarding LRN 75 it is mostly associated with CA 4.  LRN 75 was designated between Oakland and Walnut Creek in 1931.  LRN 75 was extended to Altaville near Angel's Camp in 1933 according to CAhighways.org.

By 1965 the implied routing of CA 24 west of the Caldecott Tunnels to US 50  appears on the city insert for Oakland.

The CA 24 freeway west of the Caldecott Tunnels is shown complete by 1970.

As stated in the intro the route of CA 24 in it's maximum scope was one of the grandest State Highways in terms of length and importance.  It's somewhat ironic that CA 24 still exists albeit on a small section that wasn't part of the original 1934 designation.  The following post 1964 State Highways follow the general right-of-way of CA 24:

Of note CA 24 before the 1964 renumbering was straightened north out of Sacramento via what is now CA 99 and CA 70 to Marysville.  US 40A had also been designated over what was CA 24 on the modern alignments of CA 113 and CA 70.  CA 24 has been a frequent topic in many of my blogs which cover former portions of the highway:

-  This blog covers mostly the Warren Freeway but goes into greater detail regarding former CA 24 on Ashby Avenue and Tunnel Road.

-  This blog covers what was CA 24 east of Walnut Creek through Concord.  Oddly CA 242 was signed as part of CA 24 at least until 1988 according to my map research.  A wide bypass of Concord which CA 24 was to be built upon was planned but never has fallen off State Highway Maps.

-  This blog covers much of what was CA 24 in the Sacramento River Delta on current CA 160.

-  This blog covers the history of surface highways in Sacramento which includes CA 24.  CA 24 went through massive realignments in Sacramento before the 1964 State Highway renumbering.

-  This blog covers the route of CA 113 which assumed portions of what were CA 24 between Woodland and Tudor.

-  CA 70 is the largest segment of CA 24 to be split off and was even part of US 40A at one point.  In my personal opinion CA 70 as a standalone highway is one of the greatest transportation marvels in the State Highway system.