From Sunday's (1/17/10) Asheboro Courier Tribune-
"After years of planning and a little over one year of construction, the Piedmont Visitor Centers on the Randolph/Montgomery County line are open for business — at least to northbound travelers.

Those headed south may have to wait about one more week.

DOT officials project that half a million travelers will stop at the two Visitors Centers each year.

On Friday [1/15], facilities on the northbound side of U.S. 220 Bypass began welcoming visitors. The doors were opened at roughly 3:30 p.m. after some last-minute work to remove traffic barrels and check on guard rails.

Jeff Loflin, DOT regional engineer, said final work on signage is stalling the opening of the facility on U.S. 220 Bypass South. He expects those concerns to be cleared up quickly.

The centers on U.S. 220 Bypass were built by the state’s Department of Transportation but will be operated in a joint public/private partnership by Asheboro-based Safe-T- Works. Owner Kim Price negotiated a three-year contract with the state to run the facilities.

The state is providing the facilities and paying for utilities (apart from telephone and Internet service). Price’s job will be to maintain the facilities, both inside and out, and to cater to the traveling public."

Click the title which has the URL for the entire article.

Comment: Some locals are angry that NCDOT plans to shut down the existing rest area in Seagrove due to these new ones being open. NCDOT has agreed to leave the old one open at least through the spring.

I'll probably wait until decent weather (so probably not this weekend) to visit the centers (and to make sure the southbound one, which is up on a hill, is open). I'll post photos to the blog.

Here's a photo approaching the northbound Visitor's Center from a couple months ago: 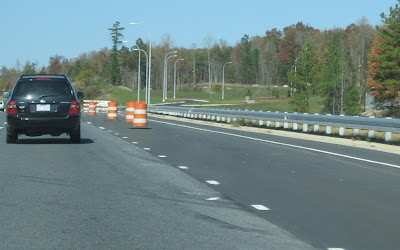 Meanwhile, those interested in seeing a few photos can see thumbnails (of photos you can buy here:
http://www.instantimagegallery.com/iig/a/372/160589;jsessionid=3C2E32F1089D69851C58044AC0285436?state:cat/Catalog=BrO0ABXcgAAAAAgEAByRCb3JkZXIAEG9yaWdpbmFsQ2xpZW50SWRzcgARamF2YS5sYW5nLkludGVnZXIS4qCk94GHOAIAAUkABXZhbHVleHIAEGphdmEubGFuZy5OdW1iZXKGrJUdC5TgiwIAAHhwAAABdHcMAAAJY2F0YWxvZ0lkc3EAfgAAAAABbA%3D%3D ).