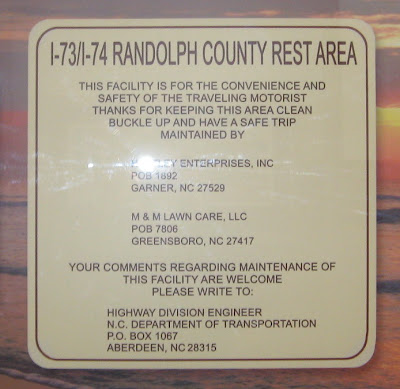 Since a snowstorm forecast for this weekend would probably scuttle my road trip plans, I decided to take advantage of the temporarily spring-like weather on Thursday (1/28) to visit the two newly opened I-73/74 Rest Areas/Visitor Centers.

SOUTHBOUND VISITOR CENTER
My first stop was the southbound rest area that is up a hill and looks over the freeway corridor below. Below is a photo of the complex, except for the vending area: 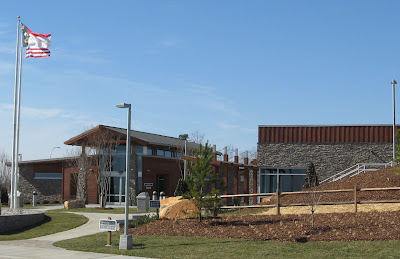 Here's a closer look at the Visitor Center itself: 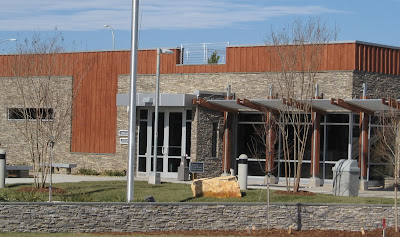 The controversy over building these rest areas was whether they should be 'Welcome Centers' or 'Visitor Centers.' The state backed down on Welcome Centers because they would be run on state funds and were seen as inappropriate for this location. From looking at the photos above, and the what was put into the surroundings, it appears what we have here though is Welcome Centers in all but name. The parking lots for both are very large, at least just as large as the I-85 South Welcome Center near the Virginia line. While this Center concentrates on information about the local pottery region, they also have brochures on all NC regions-Coastal, Piedmont, Mountain, that the other Welcome Centers do. Like them also, they also have state maps, (there were plenty available, so I took one, even though I have 2 others). There were 2 staff members who were available to answer any question I had. A closer look at the restroom facilities also shows that little expense was spared, everything automatic, they even have those 'airplane engine' hand drying fans (and some may see a familiar car): 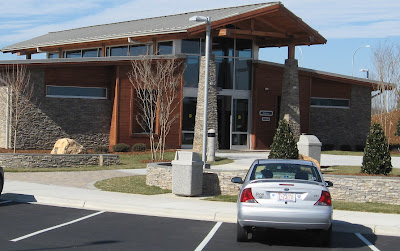 There is a separate building for vending machines (Pepsi products only, this is NC) and various snacks. The rest area also has picnic tables above the Center buildings so people can sit and or eat with a view (area was closed off, not quite finished yet apparently). 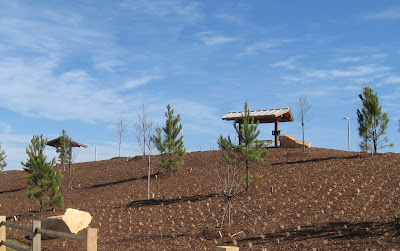 Before heading off to the Northbound rest area, here's the view of it from southbound: 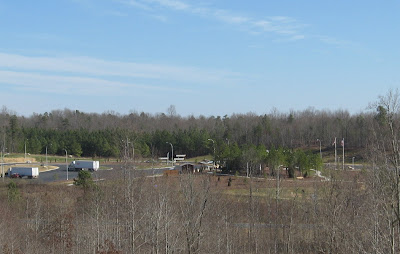 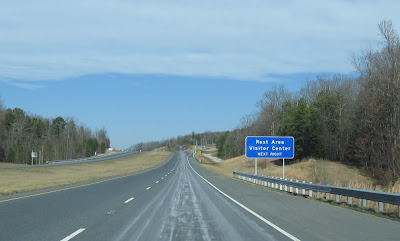 The material in the right lane was salt brine put down to help de-ice the road for the upcoming storm. Another photo at the off ramp, for those who like signs... 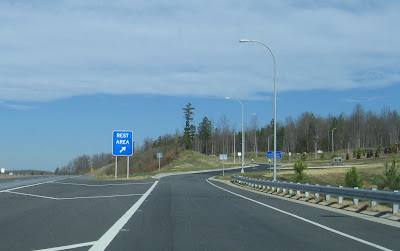 The buildings are designed similarly in the northbound center, though the layout is a little different. Instead of a hill with a view, the attraction here is the fountain in front of the Visitor Center entrance: 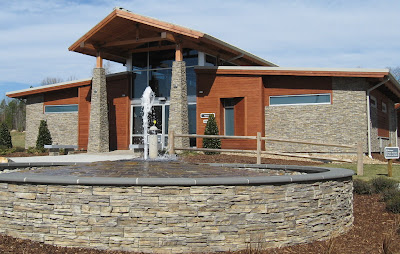 The fountain is also in proximity to the US and state flagpoles: 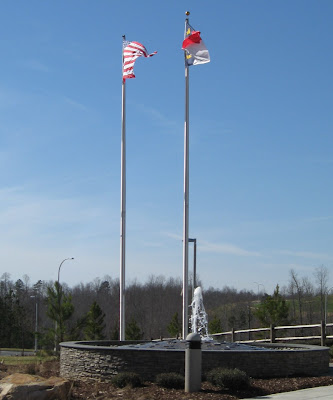 You can see part of the southbound rest area's parking lot in the distance. Finally, since you probably want to check out the facilities: 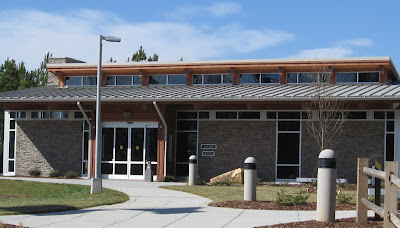 Again, probably much fancier than the public imagined when they got the legislature to 'downgrade' the rest areas to Visitor Centers. As you would imagine, on a winter weekday, there were not many visitors. There were 4 cars at the southbound and perhaps 5 northbound. It will be interesting if there are any complaints about the costs of construction, once more people get to visit these two Centers.

An I-73/74 Extra. When is a freeway both a current and a future interstate at the same time? 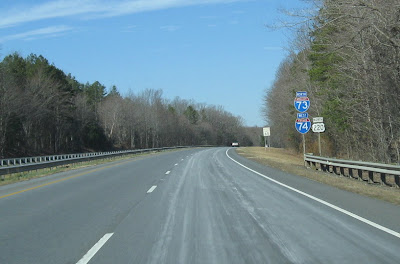 Just beyond Exit 51 Northbound where the signs indicate you are on North I-73 and West Future I-74. This is actually an apt mistake since this section of the road is close to interstate standards and continues to just before the next exit. NCDOT signs this section at 65 MPH and the medians are narrower but still wider than other parts of US 220. The section ends at the next exit which is not a National Highway System Route, otherwise NCDOT may have been able to extend the Interstates further north for real.

Anonymous said…
These are unbelievable facilites....who runs them and what did it cost to build them in the middle of no place!?
12:56 PM