Will Charlotte stop complaining about I-485 now?

By Adam January 10, 2010
Both the Triad and Triangle Business Journals last week published stories on the amount of funding for highway loops throughout the state of North Carolina. And when you look at the details, Charlotte doesn't have much to complain about. 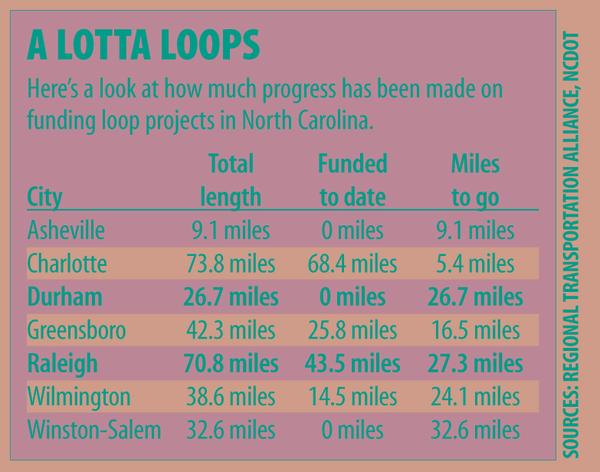 In fact, Charlotte has the greatest percentage of their loop miles completed or funded within the state. At 93 %, or 68.4 of nearly 74 miles proposed, Charlotte is well ahead of other cities like Raleigh or Greensboro and miles beyond Durham, Asheville, or Winston-Salem which show zero miles funded/completed. (See figure at right.)

For years, residents and political leaders in the Charlotte area has complained about the lack of urgency in Raleigh to complete their loop. The reality of the chart shows that Charlotte is way ahead of any city within the state.

The root cause for the infighting between North Carolina cities for limited highway funds can be traced to the variety of funding mechanisms for transportation projects within the state. The Highway Trust Fund - which was created in 1989 - was slated to build loop projects throughout the state. Sadly over the years, Governor's and the State Assembly have raided the trust fund to balance the state budget. These raids have pushed back the funding availability on a number of projects that were ready to go over the past ten years.

Also, the state's 'equity formula', also enacted into law by the General Assembly in 1989, has been perhaps the biggest influence on how and more importantly where highway funds get spent. The equity formula requires - "that State Transportation Improvement Program funds be distributed equitably among regions of the state. Monetary distribution is based 50 percent on the population of a region, 25 percent on the number of miles of intrastate highways left to complete in a region and the remaining 25 percent is distributed equally among the regions for the STIP".

Though Urban Loop's are exempt from the formula, money for loop can come from these funds. In recent years, growth in the metropolitan areas has far outpaced rural areas; however, the equity formula has required that money be spent on rural highway projects. Leaders in Charlotte, and other cities, have complained about how rural projects are first in line - while needed projects in their city get kicked further down the line.

NC Secretary of Transportation Gene Conti has begun to shift the focus of NCDOT on needs vs. the various funding formulas. The NCDOT has begun to work on designing a new work stream that will focus on projects that can and will be done in a five year period vs. shuffling around projects on and off the funding lists.

Will that stop Charlotte residents complaining about the completion of Interstate 485? Of course not. The chart and accompanying stories show how competitive it is within North Carolina for limited highway funds. And that's something that won't change - no matter what the funding formula(s) or sources are.

Anonymous said…
Adam, do you have any idea if the equity formula will be modified or dropped in the next few years? With rural areas losing clout in the state government to the more urbanized Piedmont, and the larger number of discontented voters voicing their concerns in the Piedmont, it seems likely to me that NCDOT and/or the General Assembly will want to alter this some way soon. That would be a shame for our rural areas of course, particularly in the east and west, but as an urbanite in the Triangle, I frankly think it needs to happen, as right now the major metropolitan areas just are not getting what they need if they want to continue to boom transportation-wise this century. Your thoughts?
9:15 AM