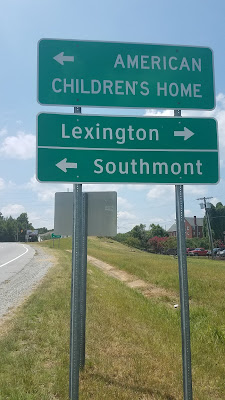 Clearview can be a sore subject within the roadgeeking community.  Some people absolutely hate it.  Personally, I don't mind it.

Unlike our neighbors Virginia or South Carolina, North Carolina never really caught onto the Clearview craze, but it does appear that it was tested somewhat in the Lexington / Davidson County Area.  This specific sign is located off of Interstate 85 at Exit 91 for NC 8.  There is also another clearview sign for High Rock Lake located on this off ramp.

For a typeface font, Clearview has had quite the turbulent history since its formal introduction in 2004.  The font was developed in the 1990s at Penn State University and would slowly roll out to various levels of usage in over 30 states by 2014.  It was then when the Federal Highway Administration (FHWA) did an about face on its 2004 interim approval for use.

In 2014, the FHWA hinted that they would rescind the approval for use of the font; and in 2016, they did exactly that.  However, this wasn't the end of Clearview.  With the passage of the Consolidated Appropriations Act, 2018, Congress mandated that the FHWA reinstate the interim approval for use of Clearview.  In late March, the FHWA issued a memorandum officially reinstating the font. Will states like Texas, Pennsylvania, South Carolina, and Virginia go back to Clearview? Only time will tell.