By Challenger Tom September 23, 2018
Back in 2012 I drove the entirety of the 0.8 Mile Arizona State Route 95S located in northern La Paz County, Arizona along the Colorado River at Parker Dam. 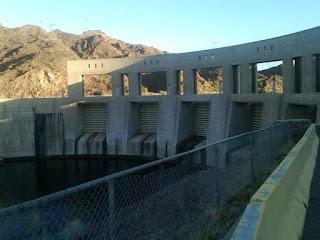 Parker Dam is a concrete arch gravity dam which impounds the Colorado River to create Lake Havasu.  Parker Dam has an unusual design in that the structure is 320 feet tall but 235 feet of is is located below the bed of the Colorado River which apparently makes it the deepest dam in the world.  Park Dam was part of the 1922 Colorado River Project and work began 1934.  At the time the State of Arizona actually had not signed off on the plans to build Parker Dam due to unease over the water share.  The governor actually sent Arizona National Guard to halt construction by the Department of the Interior on the Arizona side of the Colorado River in 1935.  Arizona won it's case against the Department of the Interior in the Supreme Court but ultimately signed off on the project after being improvements to water reclamation on the Gila River.  Parker Dam was subsequently completed in 1938 which created a new roadway between Arizona and California.

At some point in 1962 AZ 172 was designated as an extension of AZ 95 which eventually was signed north to US 66/I-40 with an additional segment north to AZ 68.  This action created not only a spur route of AZ 95 at Parker Dam but another in Parker connecting to CA 62 at the Colorado River which is also 0.80 miles.  Both AZ 95S routes are the shortest State Maintained Highways in Arizona with AZ 24 being the next shortest at 1.4 miles.  Arizonaroads.com has various pictures showing the odd signage of the AZ 95S routes.