The Curious Case of NY 990V 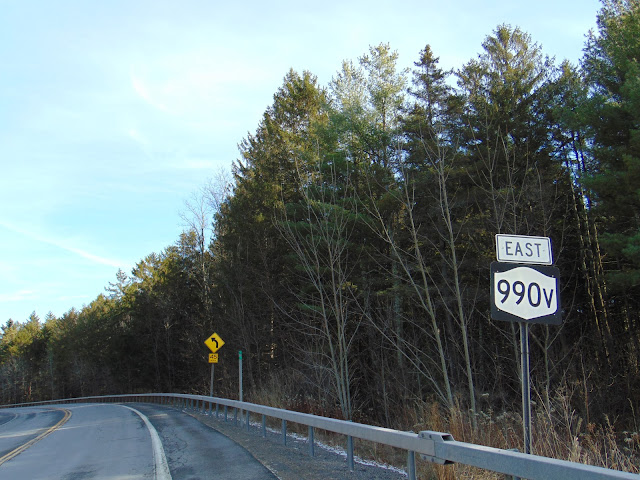 One of the more curiously numbered routes in New York State is NY 990V, a reference route in the southern Schoharie County towns of Gilboa and Conesville. In New York State, a reference route is typically only displayed on small green markers, but a few of these reference routes are signed like a regular touring route. This sparked my curiosity when I first saw NY 990V signed around the year 1990 when I was just a boy growing up and going on family trips between Long Island and the Catskills, thinking "oh cool, a new route".

But NY 990V packs quite a punch of scenery and history in its 6 mile journey from NY 30 in Gilboa, along the Schoharie Reservoir and the Manor Kill to Schoharie County Routes 3 and 18 in Conesville. In past lives, NY 990V was numbered as NY 342 (now used as a number for a state route just north of Watertown), it was part of the Catskill Turnpike in the 19th Century and in prehistoric times, there was a forest in these parts and you can see the fossilized remains of the forest. That forest is now the Gilboa Fossil Forest and is considered to be the world's oldest forest at about 385 million years of age. So let's take a look...

Frosty said…
It is an interesting road. I had never heard of its potential connection to Millwood.
If you’re riding with someone with any tendency for car sickness, you better be careful on the first 10 miles traveling south from 180
10:12 AM