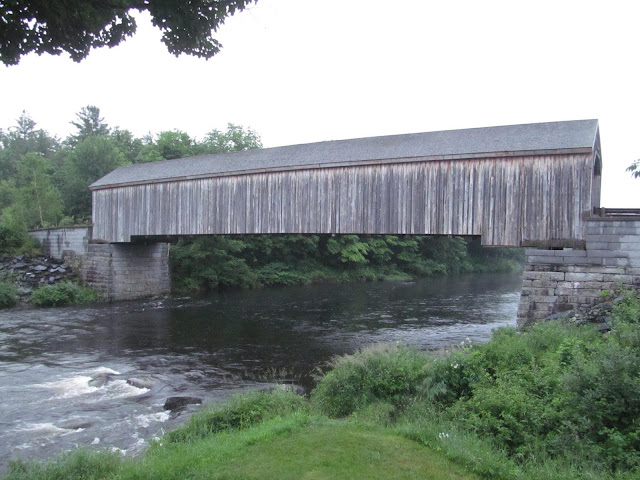 One of nine historic covered bridges remaining within the state of Maine, the Low's Covered Bridge (also known as the Lowe's Covered Bridge) spans the Piscataquis River of Maine on Lowe's Bridge Road off of ME 6, ME 15 and ME 16 between Guilford and Sangerville, not far west of Dover-Foxcroft. The 130 foot long through truss covered bridge is the fourth covered bridge at this location, having been built in 1990 after a flood washed away the previous bridge on April 1, 1987. A modern covered bridge, patterned after the original bridge, was built on the original abutments in 1990. The replacement bridge was built to have a larger load capacity and the abutments were raised in order to prevent future flood damage. The Low's Covered Bridge has also been named as a national historic landmark.

The third Low's Covered Bridge was rebuilt in 1857, spanned 130 feet across the scenic Piscataquis River and by modern standards was one lane wide. The foundation and approach to the covered bridge were constructed by Isaac Wharff, who hauled the granite used for the abutments more than 7 miles by oxen team from Guilford Mountain. Leonard Knowlton, who was the bridge's carpenter, used a patented Long truss design which used mathematical calculations to develop a truss design that looked like the letter X. The third covered bridge lasted 130 years until a major flood on April 1, 1987 destroyed the bridge.

Plans to rebuild this treasured local landmark and a tribute to early engineering ingenuity, began as soon as the flood waters along the Piscataquis receded. Ryan-Biggs Associates of New York designed a bridge that replicated the original as closely as possible and strengthened the overall structure bringing it into compliance with current codes and standards. Chesterfield Associates of Westport Island, Maine assembled the new Low's Covered Bridge offsite and more than 1,000 people watched as it was rolled into place on August 23. 1990. The new covered bridge sits on the original stone-masonry abutments that were raised almost 3 feet to reduce the potential for future flood damage.

I visited the Low's Covered Bridge during a trip to Maine over the 4th of July weekend in 2014. The covered bridge wasn't originally on my to-see list for that trip, but since I saw a covered bridge and a place to pull over, I had to stop and take pictures. There is a small picnic area near the bridge to enjoy your surroundings on a nice day. Here are some photos from my visit to the bridge.