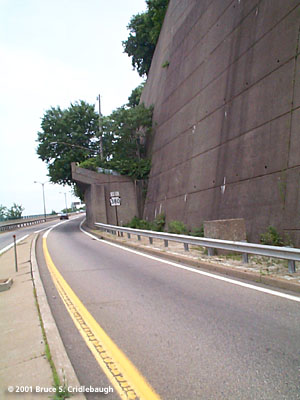 For nearly five decades, many Pittsburgh-area motorists, when leaving the old Civic Arena or exiting off the Crosstown Expressway onto Bigelow Boulevard, have wondered what exactly the ghost ramp in the above photo was for.  Where was it to have come from?  When and why did they stop?  Will it ever be built?
The original plans for the Crosstown Expressway included a full interchange with Bigelow Boulevard.  However, these plans never came to fruition.  The only ramps that were built were from I-579 North onto Bigelow and from Bigelow Boulevard/PA 380 West to I-579 South.  The above ramp was to have come from I-579 South and depending on what older map of Pittsburgh you have over or under the existing roadway, and on to Bigelow/PA 380 East.  It never came to be, and now the HOV ramp to what was once the Civic Arena has basically eliminated the need for completing this interchange. 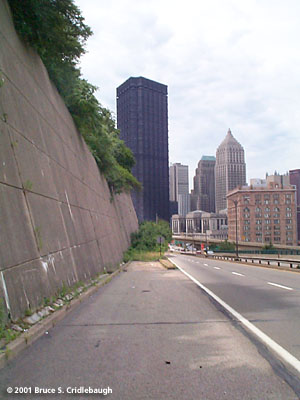 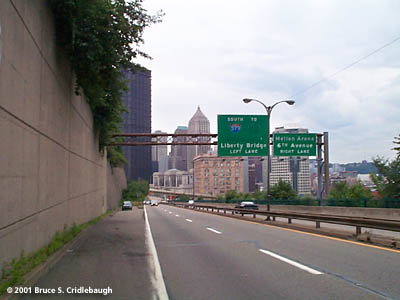 The two photos above show the retaining wall with the ghost ramp and how it would have connected to Bigelow.  The below photo shows exactly how narrow the off-ramp would have been. 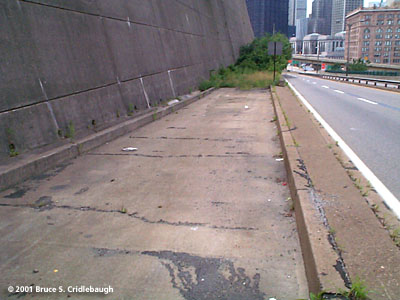 There are two of different theories on why the full interchange was never built.  One is that the ramps would have resulted in the old Pennsylvania Railroad Station, Penn Station, being torn down and that local preservation groups fought to keep it standing.  However, outside of this video discussing the Bigelow ghost ramps, I have never heard of that.  It is correct that the completion of I-579 and the construction of the Veterans Bridge carrying the Interstate over the Allegheny River did impact the former Pennsylvania Railroad freight building; however, the highway's construction had no impact on the former rail station.  The other reason mentioned is that funding for the completion of the Crosstown Expressway, Interstate 579, required some type of mass transit/high occupancy vehicle requirement.  The I-279/579 HOV lanes were the result and because of this, the additional ramps were taken out.  It is most likely the combination of the two - the addition of the HOV lanes - and the impact on the freight warehouse - that caused the full Bigelow Boulevard interchange to be shelved.

The final three photos show how far along construction on this ramp went - and in even photos taken in 2001 - how the long abandoned ramp had been overgrown with grass, brush, and trees. 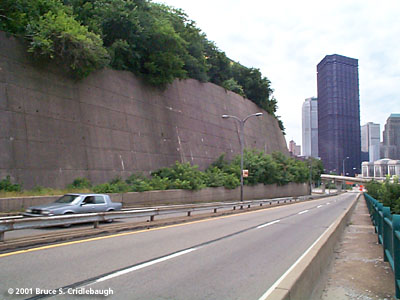 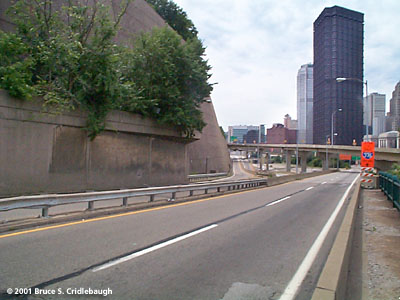 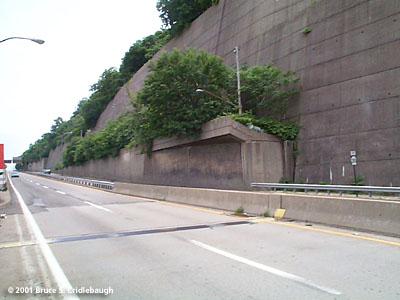 In addition, there were once plans to have an additional interchange along Interstate 579 connecting the Crosstown Expressway with Fort Duquesne Boulevard.  If you have any information on the overall plans and demise of the Bigelow or Ft. Duquesne Blvd. ramps and interchanges, please leave a comment or drop me an e-mail.

JQ said…
I think the requirement for the HOV lane basically killed it. Here is the theory video I did a few years back
https://youtu.be/UD--BlyIEbw
5:36 PM