By Challenger Tom October 19, 2017
On the 19th I had an opportunity to drive down from Monterey to Big Sur to the recently completed new Pfeiffer Canyon Bridge on California State Route 1.  Given Pfeiffer Canyon just reopened on October the 13th, the CA 1 BGS sign at the Carmel River was changed to reflect that fact that Lucia as far south as Gorda can now be reached by car. 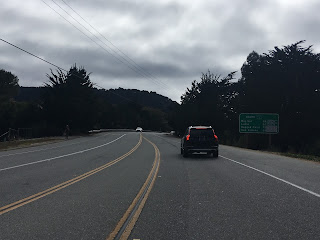 Rather than re-post all the photos of Big Sur along CA 1 like I have many times this year I'll just refer anyone interested in viewing them to my Flickr page:

I think most people who view this blog really just want to see the new Pfeiffer Canyon Bridge.  My approach was southbound past some still active Caltrans crews. 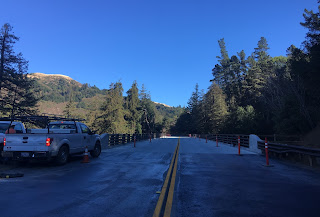 There was a handy pull-off of the south side of the new bridge which allowed me to get a good look at the structure. 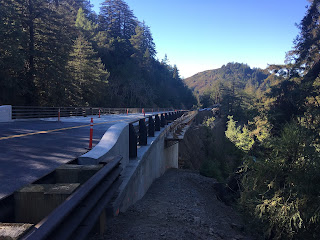 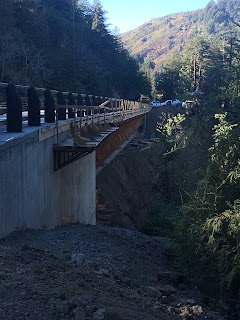 The lanes on the new Pfeiffer Canyon Bridge are 12 feet wide with 5 feet shoulders.  The new bridge time stamp is easily reached with the extra wide shoulders. 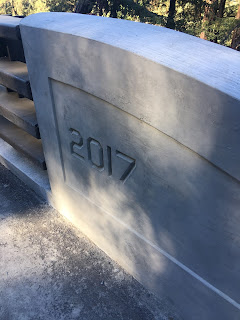 The previous Pfeiffer Canyon Bridge was constructed by 1968 and was a concrete box girder design.  The 1968 bridge replaced a wooden road bridge which likely was in place when CA 1 was being built in the Big Sur region in the 1930s.

CA 1 through Big Sur won't be completely open until the Mud Creek Slide zone is rebuilt.  Current projections have the entire highway being reopened by summer of 2018.  At present moment CA 1 can be used south from Monterey along the Nacimiento-Fergusson Road to reach County Route G14.