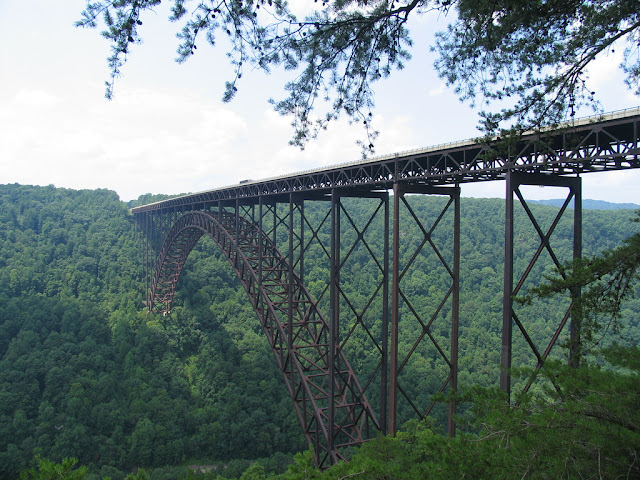 Known best for the annual 'Bridge Day,' held every October to celebrate this engineering feat's birthday, the New River Gorge Bridge is one of West Virginia's best-known road features.  The bridge completed in 1977 has also served as an economic stimulus for the New River Area, as various adventure and outdoor oriented business have flourished because of the improved accessibility to the region's true natural wonder, the New River.  Built as part of Appalachian Regional Corridor 'L,' the New River Bridge spans 3,030 feet in length.  At 876 feet over the New River, it is the third highest bridge in the US, and the arch length of 1700 feet made the bridge at the time it opened the longest steel single arch span in the world.  (The bridge is now the third longest of its kind in the world and the longest within the US.) Corridor 'L' is simply nearly 70 miles of US 19 from the West Virginia Turnpike Exit 48 to Interstate 79 (Exit 57).  It serves as a shortcut for many travelers from Western Pennsylvania, New York, and Ontario to the South and vice versa.  Personally, I cross this bridge and travel this route a number of  times a year between North Carolina and Pittsburgh. 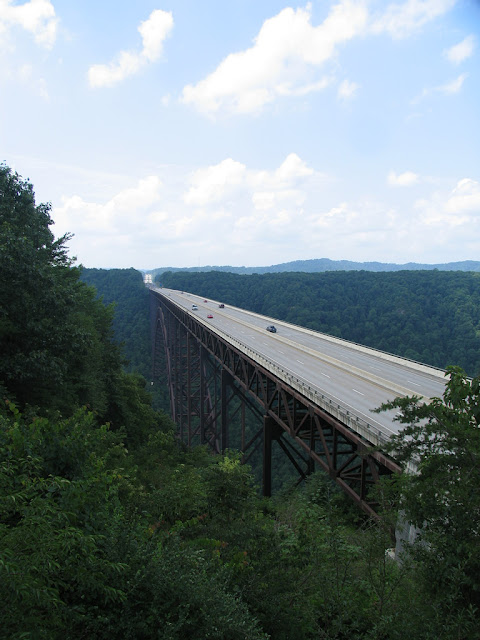 The Canyon Rim Visitor Center is the one of the better and most accessible of locations to take photos and learn about the bridge.  It is just off the north shore landing of the structure.  At the visitor center, there are a number of vantage points.  One, a quick walk that leads to a viewing platform from just above highway level (shown above) or through a longer and more strenuous trek - there are a lot of stairs - to a viewing platform that affords views of the bridge (see below) and of the New River Gorge below.  The Canyon Rim Visitor Center features exhibits and video presentations about the geological formation of the river, the area's coal heritage, and of course the bridge itself.  The visitor center is also a great place to stop and have a picnic and in our case let the kids get out and play for a little bit. 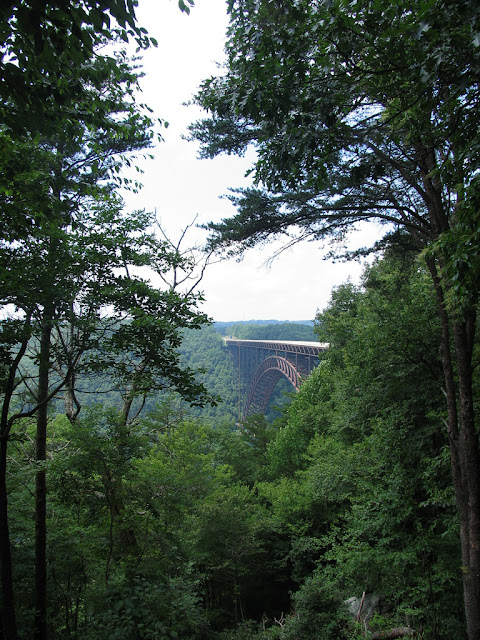 The 40 year old bridge replaced a turn of the century structure that sits less than 20 feet over the river.  It also eliminated a 45 minute down the ridge, across the river, and back up the ridge venture that motorists wishing to cross the New River at this location had to take.  Once the bridge opened, US 19 moved from an alignment to the bridge's south, over modern day WV 41, onto Corridor L and the new bridge.

"Bridge Day" is a celebration of the bridge and also of the recreational opportunities the New River has to offer.  The event, first held in 1980, features bridge jumping, rappelling, a carnival atmosphere, and more.  The festival is West Virginia's largest one-day event.  For More Information visit the New River Convention and Visitors Bureau's Bridge Day Site.  The festival is held the third Saturday of every October.  John and Barb Bee attended Bridge Day in 1989 and received a certificate recognizing their completion of walking across the bridge. 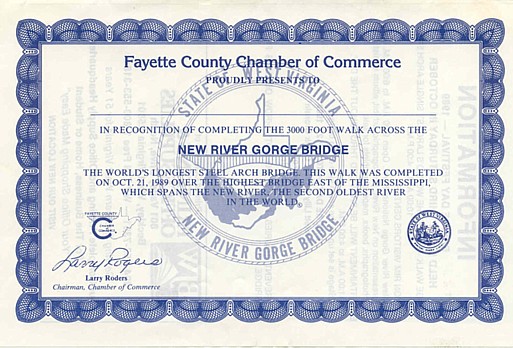 Today, you can do a rather unique bridge walk yourself.  Bridge Walk, LLC offers guided tours along the catwalk underneath the bridge.  The tours are offered daily and cost $69/person.  This unique tour was first offered in 2009 as a partnership between the WV Department of Transportation, National Park Service and Bridge Walk, LLC.  Since then, over 30,000 people have taken part of this tour. 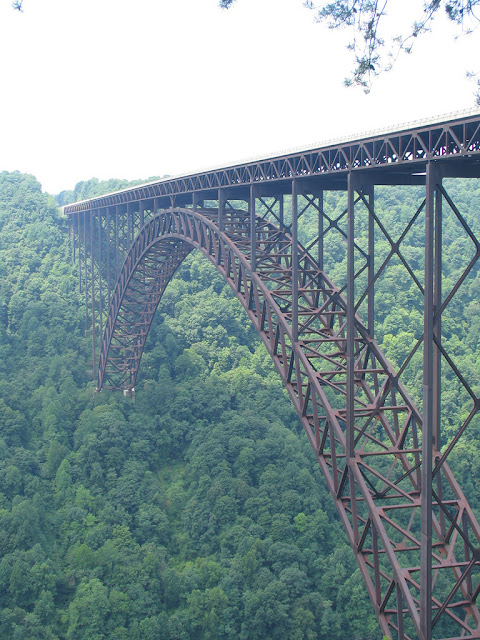 Construction on the bridge began in 1974 and was completed three years later at a cost of $37 million.  The bridge officially opened to traffic on October 22, 1977.  The bridge was featured on the back of the West Virginia state quarter by the US Mint in 2005.