By Adam January 31, 2017
Connecting Interstate 79 to the West Virginia Turnpike near Beckley, Corridor L runs nearly 70 through the heart of West Virginia.  It may be the state's most important route as it is the most direct route for residents and transplants of Western Pennsylvania, New York, and Ontario to the South, but it also opened up this once isolated area to tourism and adventure seekers everywhere.

Corridor L is a product of the Appalachian Development Highway System (ADHS) that is part of the Appalachian Regional Commission.  The Appalachian Development of 1965 put into motion the formation of the ADHS and the funding for the eventual construction of Corridor L.  Construction on Corridor L would begin in 1969 and the route would be completed in 1978. (1) A one mile spur of Corridor L connecting to the West Virginia Turnpike would open in 1980.  From the West Virginia Turnpike north to US 60 - Corridor L was built as four lanes divided.  From US 60 to Interstate 79, the highway was built as a two lane road with the exception of the bypass around Summersville.

Corridor L carries US 19 for its entirety.  The roadway was immediately popular with travelers from the North heading South on vacations or returning home over the holidays.  Corridor L (at current figures) eliminates $3.60 in tolls and 43 miles (about 40-45 minutes) of driving compared to taking I-79 and the WV Turnpike via Charleston.

The popularity of the route led to widening the entire corridor to four lanes during the 1990s.  This project would be finished in 1998. The total cost to construct the entire highway was $461 million. (1) 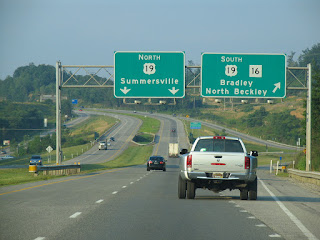 Corridor L begins and ends at the West Virginia Turnpike just north of Beckley.  If you are entering the turnpike from the south or exiting the turnpike going north, you will have to pay a $0.40 toll.  This is the only exit - albeit partial - on the turnpike that still has toll collection.  This is because of the popularity of the route for travelers heading North/South.

Corridor L misses the small towns of Bradley and Mount Hope as it heads towards Oak Hill.  In Glen Jean, signs point you off of Corridor L to Thurmond.  Located about seven miles from Corridor L, Thurmond Depot is part of New River Gorge National River and was once a booming coal and rail town that is as close to a ghost town as you can get. As of the 2010 Census, five people live in Thurmond.  Most of the town's buildings are owned and preserved by the National Park Service.  The former passenger station has been converted to a visitors center which is open during the summer months.

Returning to the highway, Corridor L next runs along a limited access bypass of Oak Hill.  One of the first sections of Corridor L to be built, the bypass is signed at 55 miles per hour. Oak Hill is where legendary country singer Hank Williams died on his way to a show in Canton, Ohio on January 1, 1953.

New River Gorge Bridge:
As you leave Fayetteville, you cross the key piece of Corridor L and the centerpiece of the entire region.  The New River Gorge Bridge is a 3,030 foot steel arch bridge that towers 876 feet over the New River below.  The bridge which opened in 1977 had an immediate impact on the region.  First, it reduced travel times by 30-45 minutes to cross the river.  But it also opened up the entire region - as a result of Corridor L - to through traffic from North and South.  Every third Saturday in October, the region celebrates Bridge Day.  This event temporarily shuts down the bridge to host a large festival and includes BASE jumping and repelling.

On the north landing of the bridge, the Canyon Rim Visitors Center sits just off of the highway.  The Visitors Center is part of the New River National Scenic River and offers numerous views from various viewing platforms, an interpretive center which includes features on the regions geography and how the bridge was built, and is a great stop to picnic.  A number of white water rafting and other outdoor outfitters are near the visitor center.  A new experience called the Bridge Walk allows adventurers to actually walk underneath the New River Gorge Bridge. The tour - which occur daily - allows you to take in the bridge and its surrounding from a catwalk underneath this famous landmark.  The cost is $69 for this unique experience.

Corridor L continues north along a scenic ride towards US 60 and the Midland Trail.  A number of outdoor expeditionary companies can be found just off the highway.  Beyond the interchange with US 60, Corridor heads towards another scenic and outdoor centered area - the Gauley River National Recreation Area.  The Gauley River and nearby Summersville Lake is known for camping, white water rafting, and fishing.  There are many times where you will see cars along US 19 parked on the shoulder or at a nearby by parking area to access either the Gauley or the lake.   The main entrance to the park is just off of US 19 along WV 129.

Summersville is the last town along Corridor L (if you are headed North) and is notoriously known for its speed trap.  The speed limit for this five mile stretch of US 19 is 50 miles per hour.  This speed trap has been documented throughout the country and in Canada. Some go as far to boycott the town completely.  Summersville is the Nicholas County seat and along US 19 are numerous restaurants, gas stations, and hotels.  Downtown Summersville can be accessed from Corridor L by WV 41 or WV 39. 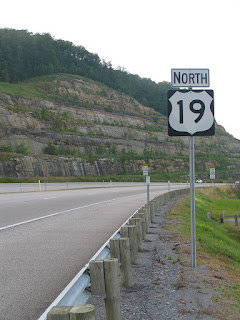 Leaving Summersville, Corridor L continues 27 miles north through the mountains to its terminus at Interstate 79.  This section of L was originally built as a two lane highway and was one of the more dangerous stretches of US 19.  The widening of this section took place in the mid-late 1990s and includes two interchanges. One at WV 55 in Muddlety and at WV 82 in Birch River.  The original pre-Corridor L alignment of US 19 typically runs to the east of the modern expressway.  Just north of Birch River, you can follow the original US 19 into Sutton by turning onto Old Turnpike Road.

The drive up and down the mountains between Summersville and the Interstate is very scenic.  Just before Birch River on the northbound side of US 19 is the Powell Mountain Overlook.  This scenic overlook offers great views of the Birch River Valley and some of the impressive construction work to build Corridor L through here.

If you are traveling through this section of US 19, be on the lookout for the Powell Mountain Goat.  Though I have never seen him, the goat is a beloved animal that is sometimes spotted along US 19 near Powell Mountain.  There is even a facebook page for him.

There is no doubt that Corridor L opened this section of Central West Virginia to new economies - specifically the tourism industry. (1) Fayetteville, Oak Hill, and Summersville all offer tourist accommodations along with various outdoor companies.  The highway made the natural area much more easily accessible to adventure seekers from all directions.  In addition, the influx of through travelers to southern destinations made Corridor L West Virginia's Gateway to the South.

Corridor L is West Virginia's Gateway to Adventure and the communities that sit along it certainly have welcomed newcomers from all around whether it is just passing through, a weekend adventure, or as a new resident.