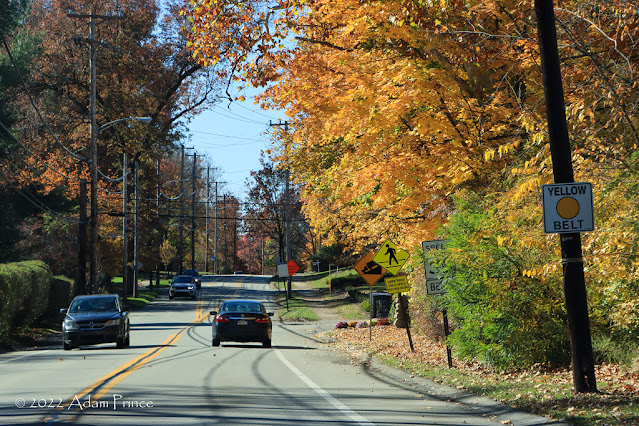 If Allegheny County's Orange Belt takes you to the outer edges of the county; the Yellow Belt, in contrast, may be the ultimate day trip within the county.  Shorter - and not as long or tedious of a drive - the Yellow Belt gives you a little bit of everything - suburbs, Mon Valley Industrial towns, recreation, and access to nearby shopping centers.

The Yellow Belt is a slightly over 75-mile-long journey through the heart of Allegheny County.  Though it is not as frustrating as the Orange Belt - fewer turns onto various roads and doesn't take as long - it still is a slow and at times frustrating drive at just under three hours.  But the variety of landscapes and proximity to various activities make it a great day trip for exploring.  And in a county as big as Allegheny, a chance to see much of the area you may have never seen before.

I began my journey in McKeesport at the intersection of Hartman Street and PA 148.  I would travel counter-clockwise.  The Yellow Belt is a full loop - so it will be a complete circuit around Pittsburgh. 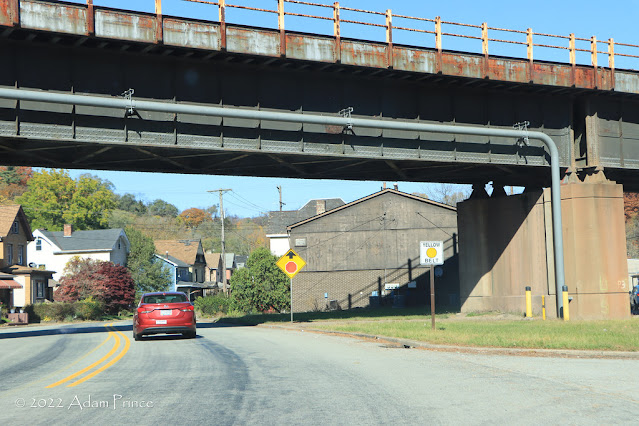 The Yellow Belt southeast of Pittsburgh goes through some of the old industrial communities of East McKeesport, Wilmerding, Turtle Creek, and more.  Here, the Yellow Belt serves as a main north/south connector utilizing key roads as a decent connector from the industrial towns to the Parkway East near Monroeville.

North of the Parkway, the Yellow Belt turns more commercial as it follows Rodi and then Frankstown Road before returning to a more rural and exurban feel along Hulton Road.  Hulton Roads heads towards the town of Oakmont and takes on a suburban town feel.  It passes Oakmont Country Club before heading down the hill to the Allegheny River.

The Yellow Belt crosses the Allegheny River via the new Hulton Bridge - a new four-lane bridge that replaced an old Pratt truss bridge built in 1908.  A right turn puts the Yellow Belt onto Freeport Road (old PA 28) for only a mile before turning left onto PA 910 and eventually towards the North Hills. 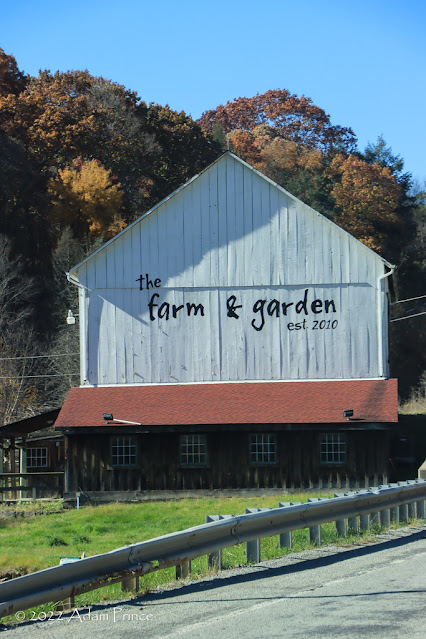 The Yellow Belt returns to a rural setting through Indianola along PA 910.  A pair of left turns onto Cedar Ridge (which I missed) and Middle Roads return you to the suburbs in Hampton Township.

After a right turn onto Wildwood Road and crossing over Route 8, the Yellow Belt enters North Park.  One of the many parks within the Allegheny County Parks System.  North Park has pretty much every recreational activity you can take up.  Golf, running, fishing, biking, and more can be done at North Park.  Even have some fun at the batting cages.
As the Yellow Belt continues through the North Hills, it remains a two-lane road as it cuts east/west through McCandless, Ingomar, Franklin Park, and Ohio Township to Interstate 79 at Mt. Nebo Road.  Here, the Yellow Belt briefly joins I-79 South to Neville Island.
After exiting I-79, the Yellow Belt is briefly on the island before crossing the back channel of the Ohio River and into Coraopolis.  The Yellow Belt winds through West Hills suburbs before reaching the commercial strip along PA 60 in Robinson Township.  A left turn onto Campbells Run Road has the Yellow Belt parallel the Parkway East until Carnegie.  (Unfortunately, a bridge replacement on Campbells Run closed the road, and I had to detour on the Parkway until Carnegie.) 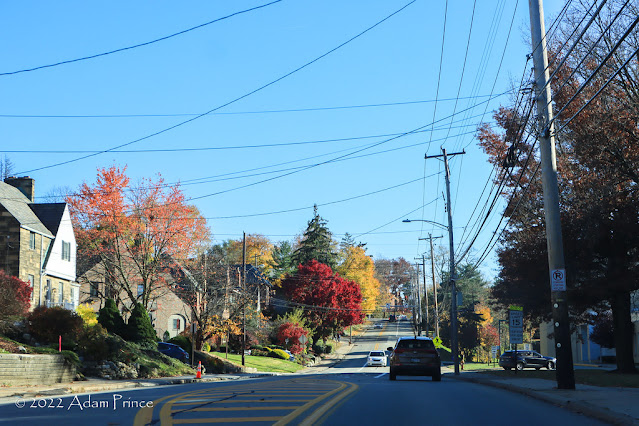 From Carnegie, it was onto the South Hills and some of the southern suburbs of Green Tree, Mt. Lebanon, and Bethel Park.  With the exception of Hope Hollow Road, it is full on suburban, a four-lane mix of older shopping centers, older homes, churches, and plenty of stoplights.  South Hills Village Mall and the Galleria Shopping Centers are on or near the Yellow Belt through the South Hills.

Continuing east, the Yellow Belt runs along the northern border of South Park - North Park's southern relative.  After a brief two-lane through some older suburbs in South Park, the Yellow Belt runs as a four-lane arterial through Pleasant Hills and West Mifflin.  This part of the Yellow Belt I am intimately familiar with.  While growing up, it was the connector highway from Century III Mall and Route 51 to South Hills Village and South Park.   The Yellow Belt passes under the Pleasant Hills Cloverleaf as it heads past the Allegheny County Airport and Bettis Laboratories towards the Monongahela River.
The Yellow Belt crosses its third river - the Monongahela - at Dravosburg.  The Mansfield Bridge (or the Dravosburg Bridge as I grew up calling it) is one of several river bridges built by Allegheny County and Pennsylvania during the post-World War II period.  Many of these bridges were and still are, key connections in the various industrial communities along the Monongahela River.
Finally, the Yellow Belt crosses its fourth river - the Youghiogheny - over the Lysle Boulevard Bridge and into McKeesport.  The Yellow Belt is the only one of the five Allegheny County belts to cross all four rivers within the county.  Sadly, McKeesport is far from the city it once was.  You are more likely to find an abandoned or blighted building being torn down than an occupied one.

The Yellow Belt was a pleasant surprise for me.  It really gives a full taste of the communities within the county and around Pittsburgh.  Like the Orange Belt, it's a long drive.  The seemingly endless two lanes through the North Hills eat away at the time, as do all the traffic lights in Mt. Lebanon and Bethel Park.

However, the purpose of the Yellow Belt can easily be seen.  Not as a whole route but in segments of it.  It serves as a connector to communities, activity centers, and landmarks.  It serves as a signed (if you don't miss them) route vs. remembering the numerous streets you need to make a turn on or off.  It's not perfect and in the modern-day era of GPS and in-car navigation antiquated.  Yet, the Yellow Belt, more so than the Orange Belt, serves a purpose and can get you where you're going.