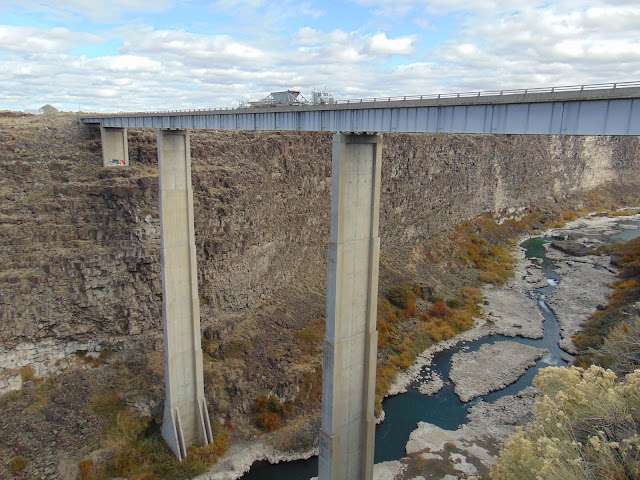 Spanning about 350 feet high above the Snake River Canyon in Idaho's Magic Valley is the Hansen Bridge, which is officially known as the Veterans Memorial Bridge. Perhaps not as well known as the Perrine Bridge about 8 miles west in Twin Falls, the Hansen Bridge was where the first crossing of the Snake River Gorge in the Twin Falls area was situated. Located on ID 50 and the Thousand Springs Scenic Byway a few miles north of the small town of Hansen, the current Hansen Bridge was built in 1966 to replace an aging suspension bridge built in 1919 at the same spot. The modern day Hansen bridge has 3 main steel girder spans set atop two of the highest piers ever built in the United States at 338 feet. The central span of the bridge is 258 feet long with two side spans of 200 feet and an approach span of 102 feet.

At the time of its completion in 1919, the original Hansen suspension bridge was the highest bridge in North America. Prior to the bridge opening, crossing the Snake River was done by rowboat. The single lane decking on the original bridge was make of wooden planks and was so narrow that two wagons could pass only if using extreme caution. The suspension bridge was replaced when it had finished living its usefulness and improvements in automotive technology had necessitated that a modern bridge be built. There are a few artifacts remaining from the old bridge at a parking area and overlook located next to the bridge.

Named for the nearby town of Hansen, there was a bit of a controversy surrounding the bridge's name when the modern bridge opened in 1966. During the 1960s, controversy erupted when an Idaho Department of Highways publication stated and repeated by a Twin Falls Times-News article that the bridge was named for pioneer brothers John and Lawrence Hansen. Readers complained about the error, saying the Hansen brothers had no connection to the bridge. A 1967 letter by W.F. Brewer, a former Twin Falls County Commissioner, explained the name and ended the controversy. “I suggested calling it the Hansen Bridge as the town of Hansen was the nearest geographical designated spot, and the town of Hansen was my home,” Brewer wrote. “The name was not given in honor of any man or men...” That letter is now on file at the Idaho State Historical Museum in Boise.

Today, you can check out the bridge by driving it on ID 50, just south of I-84. There is a parking area next to the bridge where you can see the Snake River Canyon, the bridge as it towers over the river and some historic artifacts about the old suspension bridge. It is also a nice little stopover on the way to Shoshone Falls if you are coming from the east.