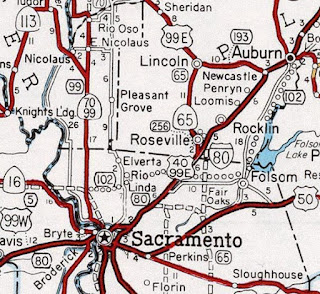 The history of California State Route 256

As noted in the intro, 1965 Legislative Chapter 1372 added California State Route 256 (CA 256) to the State Highway System as a western freeway bypass of Roseville between Interstate 80 and CA 65/former US Route 99E.  The planned route of CA 256 appears for the first time on the 1966 Division of Highways Map.  CA 256 never appears in any volume of the California Highways & Public Works, and it isn't clear when it was assigned an adopted routing.  Notably 1966 is the last Division of Highways Map which any segment of US 99 appears in California.

The planned western freeway bypass route of CA 256 around downtown Roseville was cancelled during 1976.  Although CA 256 does not appear on the 1977 Caltrans Map it wasn't deleted until 1994 Legislative Chapter 1220. 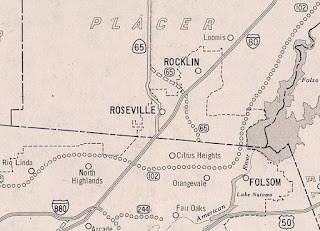 The September 1984 Final Environmental Impact Report for eastern CA 65 Roseville Bypass notes that construction of CA 256 would have been too costly largely due to having to cross the Southern Pacific Railroad Switch Yard.