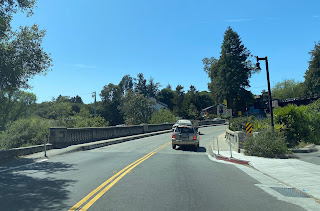 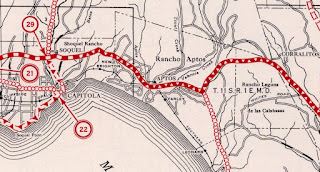 The history of California State Route 1 in Aptos

Modern Aptos traces its origin to Mexican Rancho Aptos.  Rancho Aptos was granted by the Mexican Government in 1833 Rafael Castro.  Rancho Aptos took its name from Aptos Creek which coursed through from the Santa Cruz Mountains to Monterey Bay.  Castro initially used Rancho Aptos to raise cattle for their hides.  Following California becoming an American State in 1850 the property ownership at Rancho Aptos was recognized and Castro began to lease his lands.  Soon a small town emerged on Rancho Aptos which included a wharf, general store and lumber mill.

During 1872 sugar magnate Charles Spreckels began purchasing large tracts of Castro's land holdings to make way for a Southern Pacific Railroad line.  Aptos came to further prominence when Loma Prieta Lumber Company opened operations and company town of the same name directly north of Aptos in 1883.  The Loma Prieta Lumber Company would actively log the Santa Cruz Mountains north of Aptos until 1923 on land which are now part of The Forest of Nisene Marks State Park.  Aptos can be seen along the locally maintained coastal highway in Santa Cruz County on the 1917 California State Automobile Association Map. 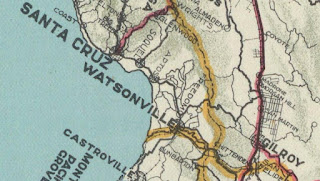 During 1928 Santa Cruz County constructed a new bridge over Aptos Creek along Soquel Drive.  During 1933 Legislative Route Number 56 (LRN 56) was extended north from Carmel to Fernbridge.  The extension of LRN 56 brought it along the coast of Santa Cruz County which aligned it directly through Aptos on Soquel Drive.  The extension of LRN 56 through Aptos brought the 1928 Aptos Creek Bridge directly under Division of Highways maintenance.

In the August 1934 California Highways and Public Works the Sign State Routes were announced.  California State Route 1 (CA 1) was applied to the entirety of LRN 56 from Las Cruces northward towards Fortuna which by proxy brought it through Aptos. 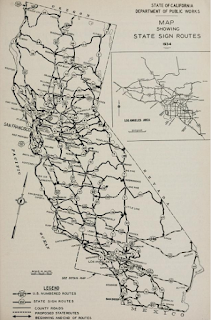 As noted in the intro CA 1/LRN 56 can be seen aligned through Aptos along Soquel Drive on the 1935 Division of Highways Map of Santa Cruz County.

The January/February 1944 California Highways & Public Works announced the expansion of CA 1/LRN 56 to a four-lane divided highway between Santa Cruz and Aptos was added to a list of approved post World War II projects by the California Highway Commission. 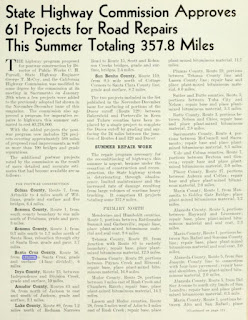 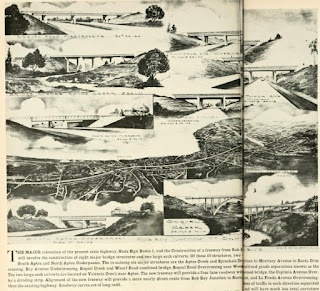 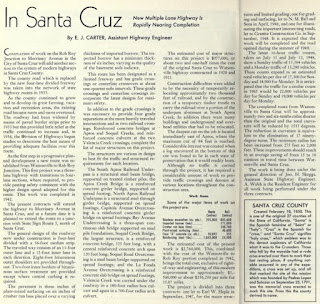 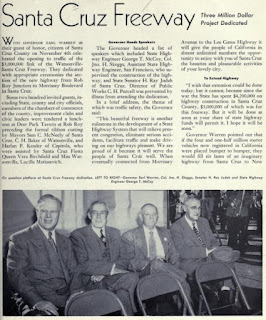 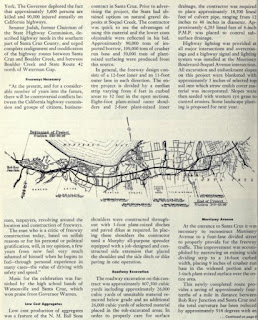 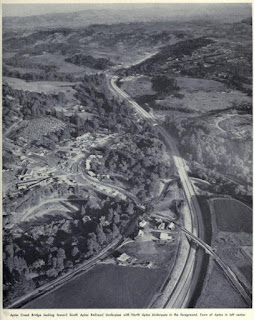 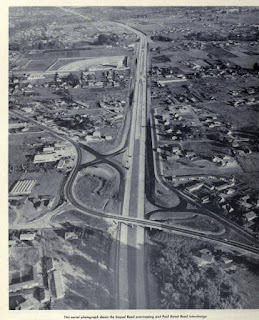 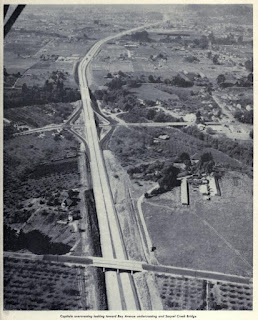 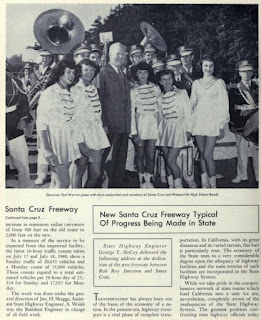 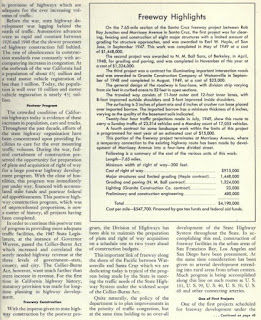 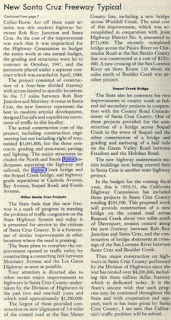 Since CA 1 was relocated in Aptos in 1949 it has changed very little in the community in the intervening decades.  During the 1964 State Highway Renumbering the Legislative Route Numbers were dropped which left CA 1 as the sole designation through Aptos.