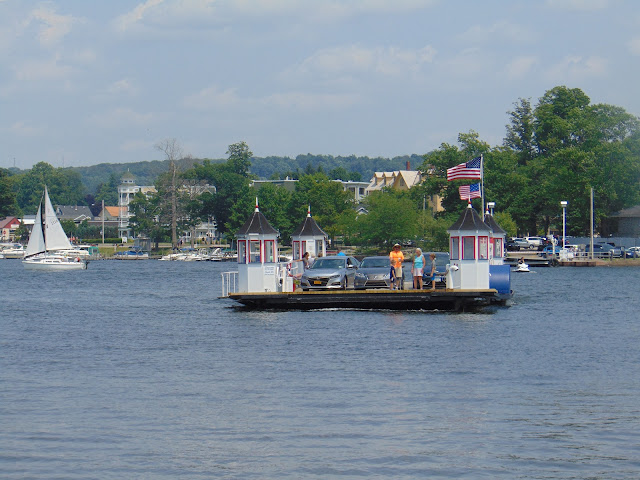 For over 200 years, a ferry has linked the seventeen mile long Chautauqua Lake at one of its narrowest points, between Stow and Bemus Point. In 1811, one of the first acts of the newly incorporated Chautauqua County, New York was to license the operation of a commercial ferry to Thomas Bemus with the intent of crossing the waters of Chautauqua Lake at the narrows. In its beginning, a small log raft carrying settlers and livestock was rowed or pulled across with a rope. This saved a 23 mile, multi-day trip around Chautauqua Lake and its forested terrain. Over time, the log raft with its hand pulled rope has been improved upon. From carrying a couple of family members from their farms in Bemus Point and Stow, pulling hand over hand on a sturdy rope stretched from side to side, the ferry soon improved to a wooden raft able to carry livestock and a wagon. After a few changes in ownership over the years, Chautauqua County purchased the ferry for $15,000 in 1942 and it became part of the county's highway system.

The Bemus Point-Stow Ferry is now is a 60 ton flat ferry with a steel hull manufactured in 1929 and powered by a large Cummins diesel engine and steel cables on either side of the boat. After many reinventions of size, shape and propulsion, the current ferry is a 66 foot by 34 foot metal barge covered by a wooden deck with a single person pilot house on each corner of the boat. It carries up to nine cars with many pedestrians and can take as many as fifty passengers without any vehicles. When the bridge for the Southern Tier Expressway (I-86 and NY 17) over Chautauqua Lake opened in 1982 just to the south of the Bemus Point-Stow Ferry, the ferry's role as a practical route across the lake ceased altogether. However, the historic ferry remained in use and back in private ownership as the Sea Lion Project in conjunction with John and Betty Lou Cheney kept the ferry running, namely for tourism and local traffic.

However, the ferry has seen some recent troubles. In 2018, the ferry was forced to halt its operation after it failed a 10 year hull inspection and lost its license to operate. The hull was eroding as a result of water and snow leaking from the top metal deck into the hull. Metal beams on the deck also needed to be replaced. In 2018 and 2019, Hohl Industries and an array of volunteers worked to replace hatch coves and steel on the deck that was causing leakage into the hull. In July 2020, the ferry was lifted via crane out of the Stow landing to continue renovations. A grant from the Chautauqua Region Community Foundation aided the repairs to the ferry. Finally, in August 2020, after three different tests, four certified inspectors approved the repair, and after a routine spring inspection, the ferry is able to start bringing passengers across the lake. A grand reopening for the Bemus Point-Stow Ferry was held over Memorial Day 2021 and the ferry was once again operational. The ferry ride is about 1,000 feet long and takes about 7 minutes in one direction. At the current time, there is not a charge to take the ferry, but donations are greatly appreciated.