By Challenger Tom July 06, 2017
After completing my crossing of the Tioga Pass Road I turned north on US Route 395.  I was after a bit of shield collecting so I stopped at the western terminus of California State Route 167 on the north shore of Mono Lake. 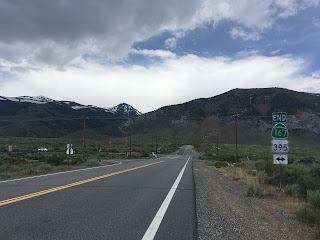 CA 167 is a 21 mile east/west state highway entirely in Mono County running from US 395 to the Nevada State Line where it becomes NV 359.  CA 167 runs entirely on Pole Line Road and is considered to be one of the straightest state highways in California.  From the western terminus of CA 167 the road continues as Lundy Lake Road along Mill Creek to Lundy Lake. 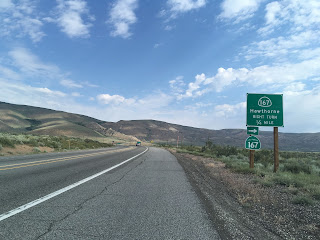 Interestingly given the straight and arrow nature of CA 167 much of it can be observed from an overlook on US 395 as it ascends northwards to the 8,143 foot Conway Summit.  In the center of the photo below CA 167 can branching away from US 395 eastward on the north shore of Mono Lake. 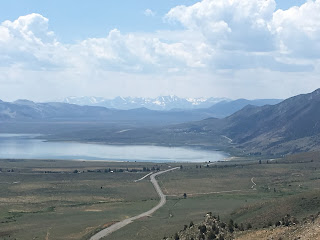 The Pole Line Highway is seen as a branch of LRN 40 on the 1954 State Highway Map.

By 1964 the Pole Line Highway was assigned the designation of CA 167, oddly CA 120 always remained on it's original course east of US 395 to US 6.  The change in designation can be seen on the 1964 State Highway Map.

Interestingly NV 31 seems to have been present in Nevada at least to the boundary of Inyo National Forest as it can be seen south of Hawthorne on the 1942 State Highway Map.

As for Mono Lake it is a large saline lake which was formed about 760,000 years ago due to the endorheic basin it lies in.  The current maximum size of Mono Lake is 13x9.3 miles with an average depth of about 60 feet.  Mono Lake was likely formed during the Long Valley Caldera eruptions 760,000 years ago and may have been as deep as 900 feet during the last Ice Age.  Mono Lake has two large volcanic islands; Negit Island and Paoha Island.