By Adam July 10, 2017
Day 2 of our family vacation saw us go from Lexington, Kentucky to St. Louis, Missouri with a stop in Louisville for the Louisville Slugger Museum and Factory.

We typically stay at a Hampton Inn, which we did, and they have an OK breakfast in the morning.  However, when there is a donut shop right across the parking lot from your hotel, where do you stop for breakfast? At the donut shop of course! 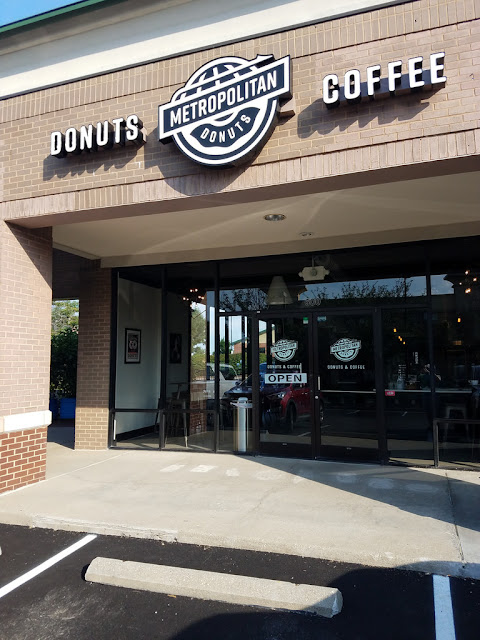 Metropolitan Donuts is located in Lakecrest Circle in Lexington.  The inside is very modern and they offer what I would say a build your own donut where you choose the type of donut, the coating (frosting/glaze), a topping, and a drizzle.  Cake donuts (which I like the most) and M&M toppings? Yes, please.  I had the vanilla glaze; Colton did the chocolate on chocolate on chocolate.  He's four what do you expect.

I will also say that Metropolitan Donuts had one of the most upscale and cleanliest bathrooms of any donut shop I've ever been to.

From there, we took US 60 to I-64 and into downtown Louisville.  I've noticed that around Lexington that the state name has reappeared on many Interstate shields.  Within the roadgeeking hobby this is a big deal, though honestly - you should be able to know that you are in fact in Kentucky and not need an Interstate sign to tell you - but hey. 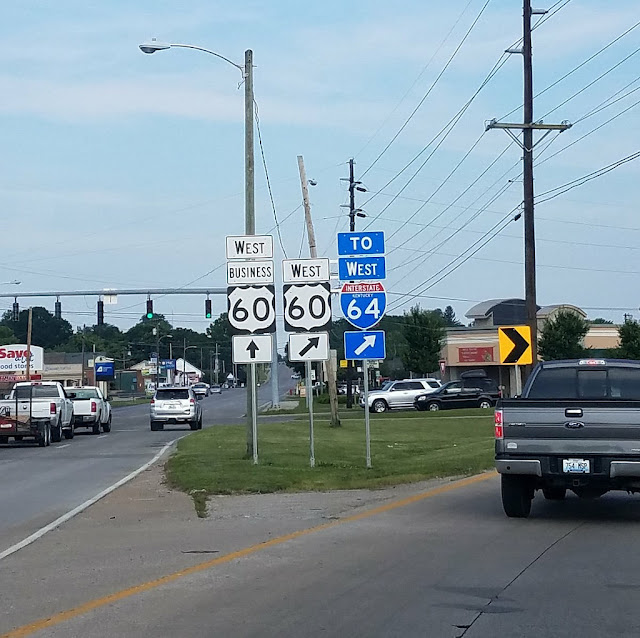 Our reason for stopping in Louisville was to take the boys to the Louisville Slugger Factory and Museum.  Easily recognizable as a result of its 120 foot high replica Babe Ruth baseball bat, the Louisville Slugger Factory and Museum is a great place for kids, adults, and everyone in between.  The cost of admission is fairly reasonable and includes a factory tour.  The factory tour is great as you can see how a bat is made and actually touch and feel bats from various major leaguers past and present.  Unfortunately, the tour doesn't allow photography.  However, the real treat is the souvenir baseball bat you receive at the end of the tour.

The museum is also a great place. Interactive exhibits, a chance to swing game used bats from players from all 30 teams, a replica dugout (including the tunnels to the locker room), and the life size replicas of famous ball players were pretty neat. 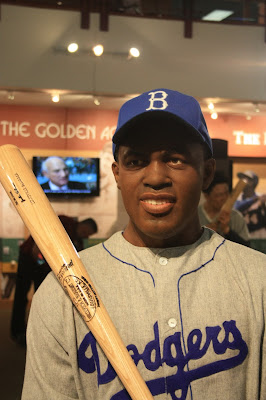 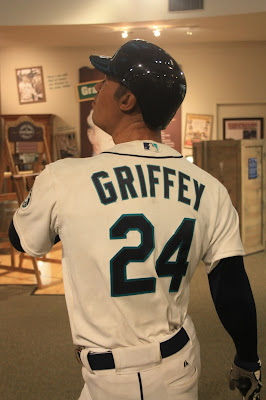 But what got the boys most excited was the Big Leagues, Little Blocks exhibit within the museum.  This exhibit has replicas of major league stadiums and other works of art built completely in Legos!  The highlight of the exhibit was the replica of Wrigley Field.  The detail was pretty amazing. 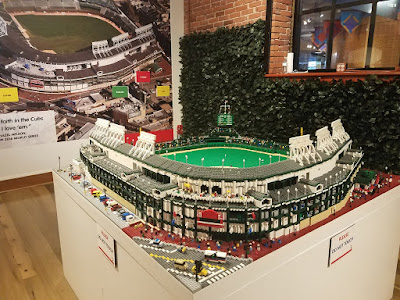 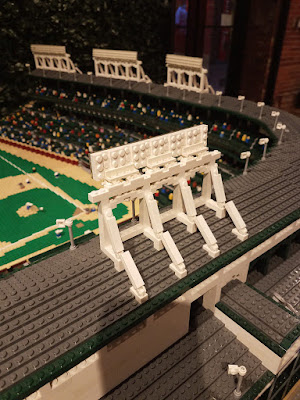 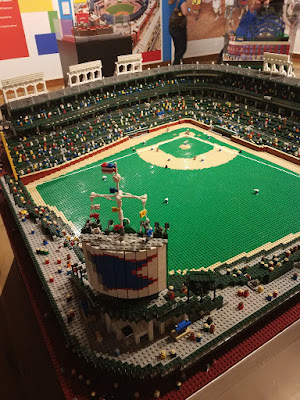 In addition to Wrigley Field, there are replicas of Comiskey Park, Great American Ball Park, Busch Stadium, and Miller Park.  There are also other pieces of art created solely of Legos. 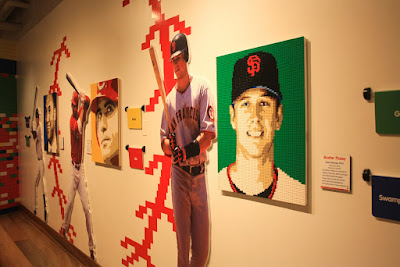 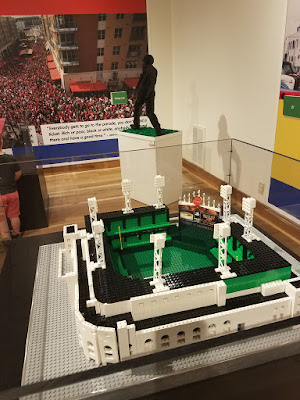 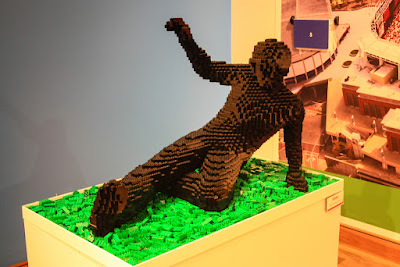 Following the visit to the Museum, we walked around Louisville a little bit before heading west to St. Louis.  I took a little detour into Clark County, Indiana so that I could gain that county.  A 10 minute detour to get an extra county was worth it, and there are a number of places to eat of of I-265 in New Albany, Indiana as well.  So a win for everyone.

One of the things we have come to appreciate when we do longer roadtrips with our kids is rest areas that allow for kids to either play or run around.  We were very fortunate when we stopped at the Interstate 64 West rest area near Dale, IN had a very large field for both of our sons and for both of us parents to run and play in.  A game of tag at a rest area is not something I thought I would do when I didn't have kids. 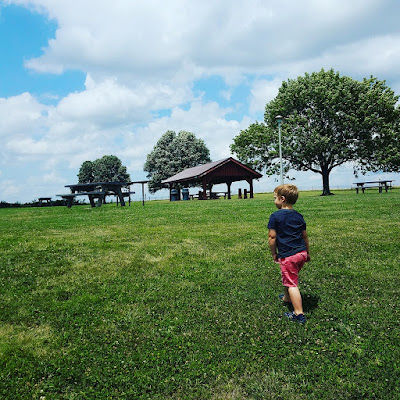 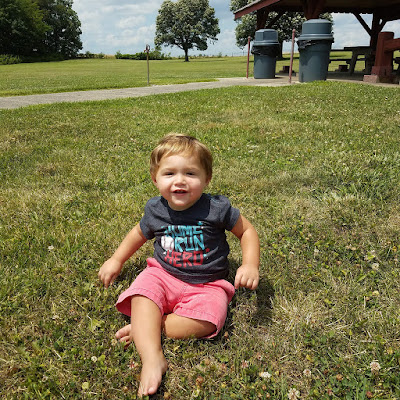 It's very rare to have an open space like this rest area did.  This rest area pretty much bordered a farm - I think you may be able to make out the cows in the background in the photo of Nash above.  I know that some states have playgrounds at their rest areas.  The playgrounds at the I-70 rest areas between Hagerstown and Frederick, Maryland are top notch! I believe some rest areas in Texas have them.  We saw one along I-70 East in Illinois.  There was a small - more for kids 3 and under friendly - one on I-95 North just before Petersburg, Virginia but that has since been removed.  If you know of any other rest areas that have playgrounds, leave a comment or shoot me an e-mail.  It's always good to keep that in mind on trips and maybe I'll make a post listing them sometime.

From there it was a straight shot to St. Louis.  I got my first glimpse of the new Interstate 69 and got the obiligatory photo below. 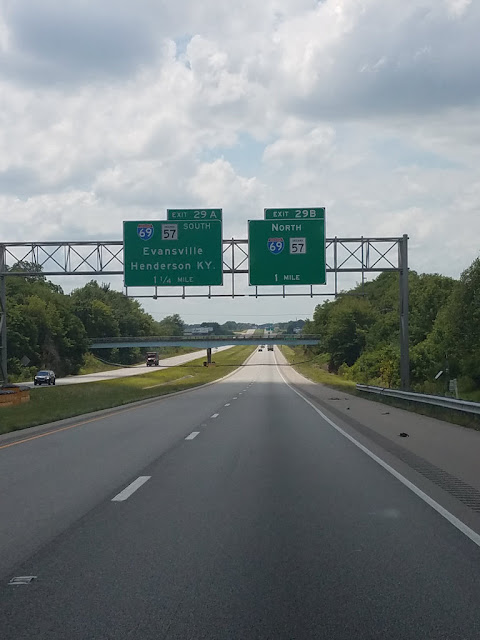 Interstate 69 has been legislated to now run from Michigan to the Mexican border at three different spots in Texas.  Indiana is currently building there part of I-69 northwards from this point to I-465 in Indianapolis.

The Welcome Centers in Illinois were closed - I believe because of the state's budget woes - so we weren't able to stop and get a map. On this trip, I had my first exposure to Interstate 57 - first with I-64 in Mt. Vernon (below) and later in the week with I-70 in Effingham.

Mt. Vernon was one of many towns where either Maggie or I or both of us had this conversation with Colton.

Colt: Daddy, what town are we in?
Me: Mt. Vernon, Illinois
Colt: Is it an old town? With old signs and buildings?
Me: I'm not sure
Colt: Can we stop and visit?

As we entered St. Louis, a thunderstorm hit so we weren't able to get photos of the arch or the Stan Musial Bridge, which we entered Missouri on.  But before I end this blog entry - one more great snippet of conversation with our boys.

Me: Hey Colt, it's yours, Nash, and my first time in Missouri!
Colt: All four of us?

Me: No, Mommy's been to Missouri many times.
Colton: Awwww no fair.

Day 3 was completely in St. Louis - We'll check out the Zoo and Downtown St. Louis on the way to a Cardinals game.