By Adam July 16, 2017
Day Four of our family vacation had us heading back east on our way to Pittsburgh, Pennsylvania.  We started the day in St. Louis and didn't start our way back east until the afternoon.

As I mentioned in the previous blog entry, Downtown St. Louis had a lot going on the Saturday Morning we were there - so we changed plans.  We ended up visiting Charles A. Shaw Park in suburban Clayton.  The park was easily accessible off of I-170 and has plenty to do.  The playground is treehouse themed and was an instant hit the kids.  It also has a water feature which Colton immediately went to. (Thank goodness we always bring a change of clothes with us.) 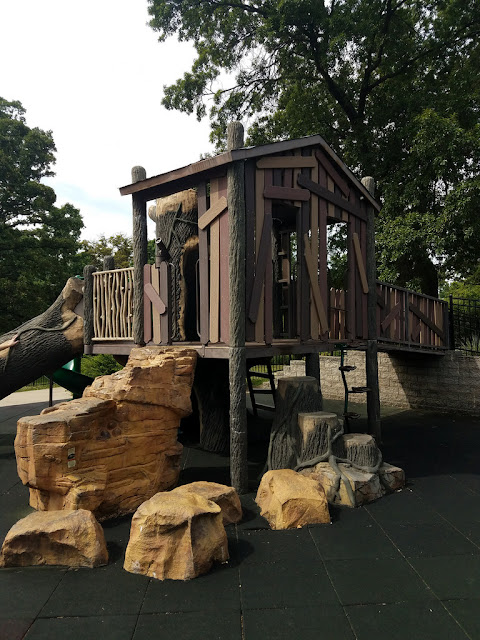 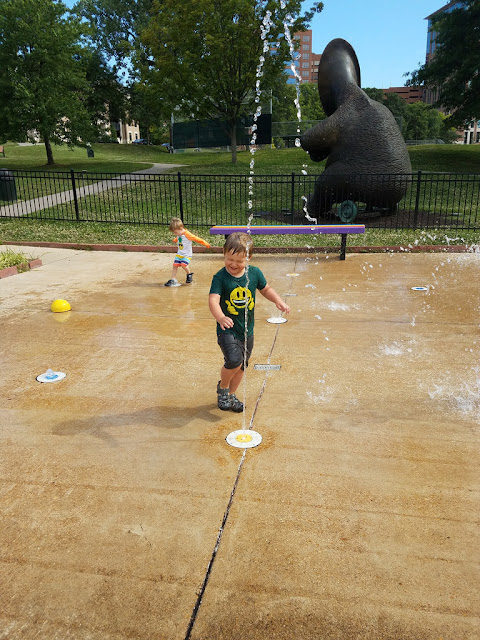 Finding a park while on longer road trips is a great survival tip for families.  It gives the kids a chance to run around and play.  Parents can get out of the car and get away from the inevitable bickering and what not siblings typically have.  A fellow roadgeek, Chris Allen, and his family take a lot more longer roadtrips with us, and looking up playgrounds and other parks prior to their long trips is part of their trip planning.  As you probably figured, I did text him about this park and a number of our other stops from this trip.

So after lunch, which included the famous St. Louis Fried Ravioli, we started our journey east to Indianapolis.  Maggie and I had considered checking out some of old Route 66, specifically the old Chain of Rocks Bridge.  But by the time we got to the Mississippi River, Nash had fallen asleep so we continued on.  If there is one thing about traveling with young kids, if you have the chance to make time to get to your destination - you are going to choose that instead of any diversion.  (More on that later in this blog post.)  So here's all that we got of Old US 66 and the Chain of Rocks Bridge.  A passenger side window photos from I-270.  See ROADS!

Colton would fall asleep not long after that as we made our way to Effingham, Illinois. This trip is interesting as it was my first exposure to Interstate 57 - albeit via multiplexes with I-64 and then I-70. But hey, I can say I've been on Interstate 57.  (There is a place that you can map online the roads you have been on.  It's a great project - just I'm not good at creating files to have uploaded and would end up falling behind - so I just highlight maps instead.)

On the 57/70 multiplex in Effingham, there is a rather tall aluminum cross just off of Exit 160.  You really can't miss it. I had seen one before in Groom, TX - and I think elsewhere.  I am sure a local church sponsors it, but it is somewhat of a tourist attraction.  As we passed by it on the interstate, there were about four cars parked in a parking lot at the cross taking a look at it.

Now remember earlier in the blog that Nash had fallen asleep prior to the Chain of Rocks Bridge? And that Colton had just recently fallen asleep.  Well in Casey, Illinois was another should we stop and wake the kids up or keep going moments.  Casey is home to a few Roadside America tourist items - the World's Largest Wind Chime and the World's Largest Golf Tee.  (The blue attractions guide signs tipped us off).  Maggie and I looked at each other and basically said to each other, "Well we are on a vacation road trip - we could stop." And we would have, except the kids were still sleeping and we'd love to make it to the hotel before dark.  So we kept going.  This would have been an unexpected fun thing to do just to get the boys out of the car and we would have probably stopped here to eat.  But with the boys sleeping - we continued eastwards.

Apparently, there are other "World's Largest" items in Casey. Like the "World's Largest Knitting Needles and Crochet Hook."  We definitely missed out.  Oh well, next time the boys will be older and we can wake them up.

The boys did wake up by the time we reached Terre Haute, Indiana and we stopped for dinner there.  Finally, as we approached Indianapolis, I noticed that INDOT has added the permanent time and distance displays to help travelers decided if they want to take the bypass or the thru route through downtown.  These are becoming more and more common throughout the US and specifically in major cities.  What were different about these signs were that they were in blue versus the standard green.  I personally like the blue, feel free to add your opinion in the comments. 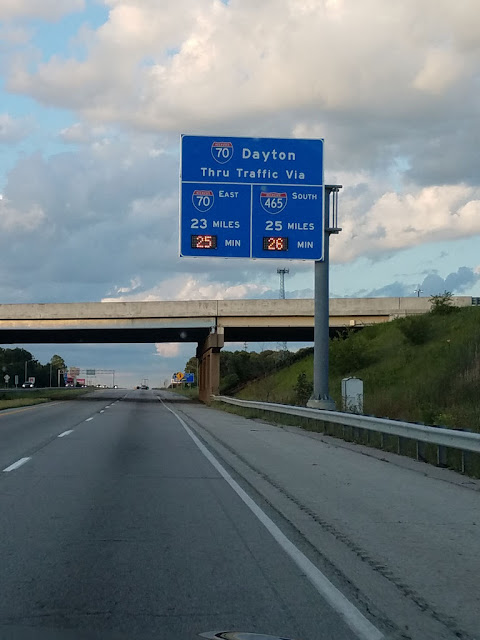 We got to the hotel in Southport, Indiana from here with no trouble.  Tomorrow's adventure - the Children's Museum of Indianapolis and then keep going east on I-70 to Pennsylvania!

Jim Grey said…
The National Road is fabulous in IL from Effingham to the IN line - if you're ever in the area again, do drive it. Miles and miles of concrete and brick highway abandoned next to the modern US 40.
11:31 PM