By Adam July 08, 2017
Our family vacation this year was a week long roadtrip adventure from Raleigh to St. Louis to Pittsburgh with stops in Lexington, Louisville, and Indianapolis planned.  Day 1 saw us go from Raleigh to Lexington, Kentucky with an unplanned stop and detour.  More on that in a moment.

For the entire flickr set from the roadtrip please head here and here for the Kentucky Horse Farm set.

When you have two kids and are about to head out a long day of driving you sometimes have to figure out when you wish to leave.  Every family is different, but for our family we try to leave between three and five in the morning.  The reason - the boys will both still be sleeping and we can at least get two to four (if we are lucky) hours of driving in before stops for the bathroom and/or breakfast. (Sometimes it's a series of stops.)  We left about a quarter past four in the morning for this trip.

Now Colton, our oldest, woke up as we put him in the car, and he didn't go back to sleep.  He's actually a pretty good traveler.  In 2015, we did a New England Roadtrip with him and he was great.  He and I had an interesting conversation somewhere in the early hours of the trip. 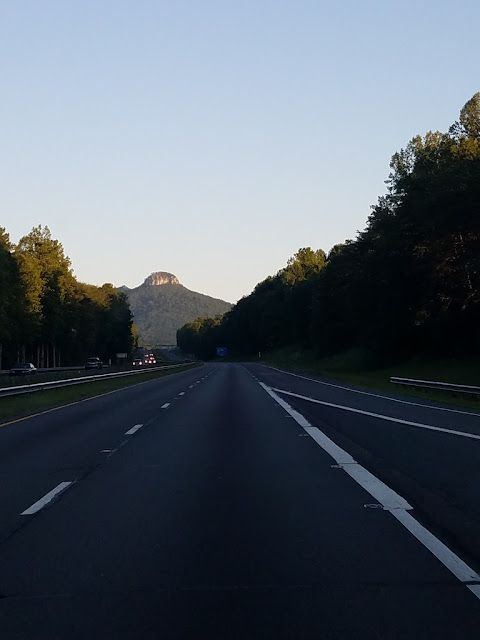 We still haven't hiked at Pilot Mountain.  We did stop there on the way back from a trip to a Notre Dame Football Game and Columbus, Ohio a few years ago.  But that was a "We need to stop somewhere to get Colton out of the car and fast!" type stop.  That's when I realized my wife's wisdom of yes, we need to leave as early as possible on trips longer than six hours.  It's been a staple of our trips to Pennsylvania and any other longer length trips ever since.

We then entered into Virginia - where along the infamous I-77/I-81/US 11/US 52 North-South Wrong Way Concurrency (Hey you are going North and South (actually east and west) at the same time!) - is this guide sign that isn't commonly seen in Virginia.

Our youngest, Nash, soon woke up after this and we had a breakfast stop at the Rest Area on I-77 in Virginia just north of here.  We packed some muffins and other items for breakfast and it gave Colton a chance to run around.  Which he enjoyed.  The birds also enjoyed all the crumbs our boys were leaving on the ground.  This is the beginning of where multiple stops would be made between here and Charleston.

The first stop was kinda a spur of the moment stop as I wanted to get a new West Virginia map at the Visitor's Center off of Exit 9 on I-77.  Well, after waiting about five minutes for the attendant to come out, we were informed that they do not have any state highway maps at this time.  So my oldest decided to just grab some various tourist brochures to look at.  Those are his maps - as he likes to say.

Now somewhere North of Beckley, Nash decided that he was tired of being in the car.  He's just over 13 months old - and we've come to learn that after a few hours in his car seat - he gets rather unhappy.  So we stopped at one of the Northbound rest areas on I-77 for a bathroom break and a diaper change.  It was here that my wife and I reassessed where and what we wanted to do on this trip.  Our plan was to eat lunch somewhere near Charleston and then go to the Kentucky Horse Park in Lexington before checking in to our hotel.  My wife's first thought was to see if there was a children's museum or park in Charleston where the boys can get out and play.  So as we left the rest area, I did a quick google search and found the Avampato Discovery Center which is within the Clay Center in Charleston.  After a quick phone call for hours, admission, and if they had anything that a toddler (Nash) would enjoy, we decided to go for it.

On a roadgeeking perspective, this is a bonus.  I had never done anything within Charleston.  I've just driven through it on I-64, 77 and 79, so hey something new!  And here's a street level guide sign overhead to prove it!
Charleston's Clay Center is home to multiple different venues and experiences.  There is a performance arts theater, an art museum/gallery, a planetarium, and the Avampato Discover Center which is basically a Children's Museum.  Our boys loved it!  We spent about an hour and a half there and easily could have spent another hour and a half.  The Discovery Center has two floors.  The top floor is typically home to a traveling exhibit and the bottom floor has what is called 'My Town'.

My Town has many of the features you find at a lot of Children's Museums.  A bank, fire truck and police car, grocery store, farm, diner, and more.  The Discovery Center wasn't too crowded this afternoon and both of our sons made new friends.  Colton, as always, really enjoyed the fire truck.  This fire truck was pretty neat as it had a fire fighting simulator where you can put out a fire within a building.
The grocery store also had working scanners and cash registers which I thought was a nice added touch. 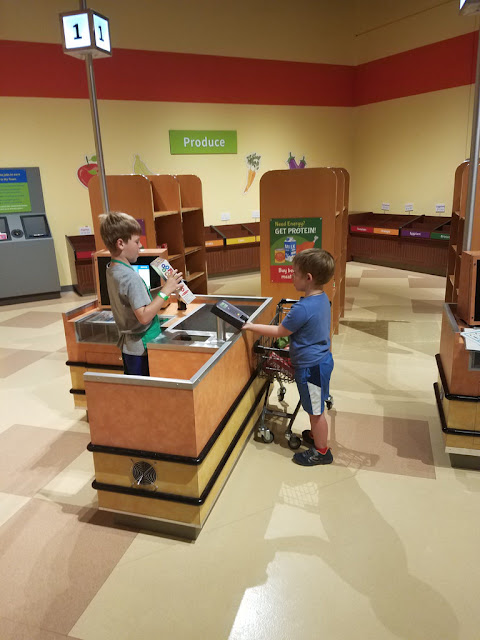 At the entrance to the Clay Center, there is this rather unique and tall piece of public art. 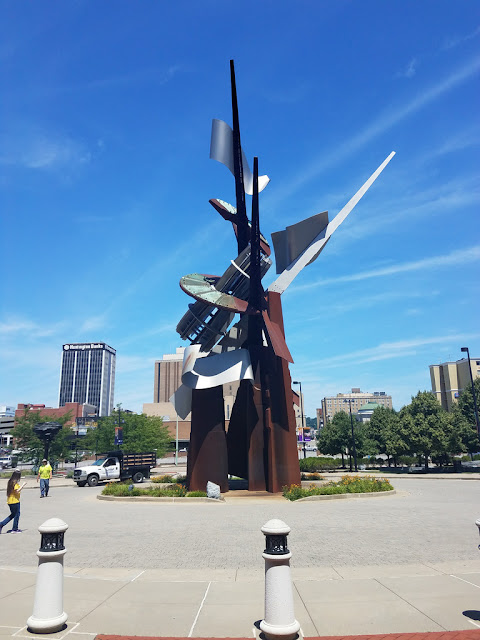 So I have to thank both of our boys for this unplanned stop.  It allowed us to briefly visit Charleston (something I hadn't done before) and have some new family memories.  So it was westward to Lexington from here.  But now it's time for the second detour of the trip - and this one wasn't caused by kids.  After we got McDonalds and gas in Dunbar, we got back on I-64 where our Waze told us to pretty much take the next exit.  It had us leave the Interstate at Exit 50 - take WV 25 to the Nitro-St. Albans bridge - then over the bridge and onto US 60 West - to WV 817 (old US 35) and back onto I-64 at Exit 44.  And again, hey new roads and one unique item.  On the Nitro side of the bridge were two statues memorializing soldiers from World War I.

Now the reason for the detour was pothole patching work along I-64 West. Judging from the reports on Waze we easily saved 10-20 minutes by taking the detour route.  Not long after this - or even during this detour - both boys fell asleep, and it was non-stop to Lexington.  Our original plan during the day was to visit the Kentucky Horse Park - which is just off of Interstate 75 north of the city.  We had hoped to get there around 2.  We didn't arrive until about 3:45, but we still decided to check it out.

The Kentucky Horse Park celebrates man's relationship with horses and is home to a number of museums, stables, and other attractions.  Adults can go horseback riding and kids can go on a pony ride, like Colton did (and also didn't want to get off of.) 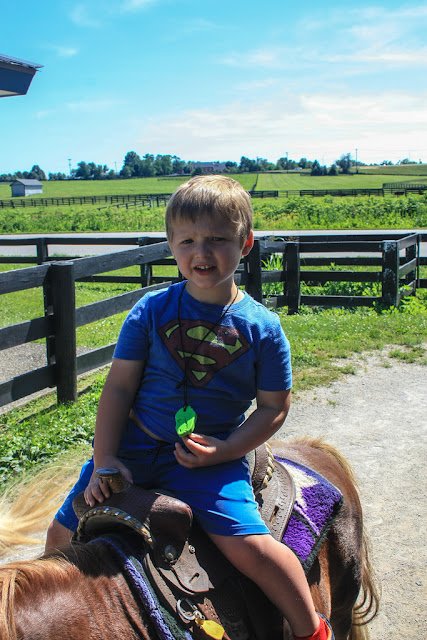 We walked around the park a bit, and would loved to have explored more, but by this point it had been over 12 hours since we left and we were getting hungry.  After dinner, we checked in at the hotel, relaxed, hit the pool, and turned in for the night.  The next day's travel to St. Louis - and a stop at the Louisville Slugger Museum awaited us.