By Doug May 06, 2007
Yesterday, I decided to take a roadtrip around some of the neighboring New England states, particularly Vermont, New Hampshire and Massachusetts. The weather was fantastic in order to take the opportunity to go, mid 60s and sunny. One of my favorite times of year to visit New England is during the spring, when plant life and people begin to wake up from their winterlong slumber.

Also clinched the Towns of Somerset and Brookline in Vermont, as part of my Vermont 251 quest.

US 4 in New Hampshire is also known as the Purple Heart Trail. I do not believe that the same distinction carries over into US 4's mileage in Vermont and New York State.

There was construction on I-91 in Springfield, Massachusetts, near the MA 83 exit. This was on I-91 northbound where the northbound lanes narrow from three to two lanes. But there were horizontally striped pavement markings, which I do not recall being there in the past.

Yesterday, May 5, 2007, was the annual Green Up Day in Vermont. It is always the first Saturday in May, and I saw a good number of people picking up trash along the roads in Vermont, in order to help Vermont look nicer. You can go to Green Up Vermont for more information.

Cheapest gas I saw was in Laconia, New Hampshire, for $2.769 a gallon for regular unleaded. I cannot remember the name of the gas station, sorry. Most expensive gas was in Connecticut, along CT 190, for $3.199 a gallon. This distinction was shared by a number of gas stations. Cheapest gas I got was at an Irving station on NH 127 in Sanbornton for $2.799. 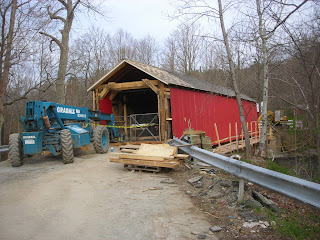 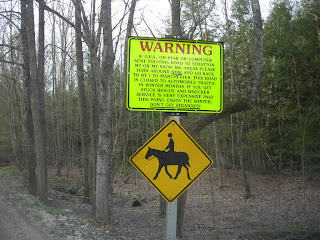 One of a few signs telling you not to take Kelly Stand Road in the winter. The Town of Sunderland, Vermont, does not maintain the road in winter, which is a rutted dirt road. There were a few makeshift fishing camps and even pockets of snow along the road, even in May. 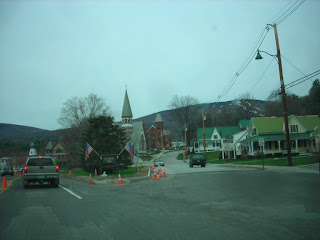 Okemo Mountain and the town of Ludlow as seen from VT 103. 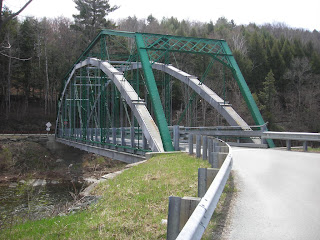 What appears to be a double truss bridge over the Ottauquechee River in Woodstock. I believe the green part of the bridge came first, and the arched truss came later in support. 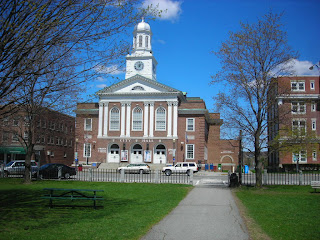 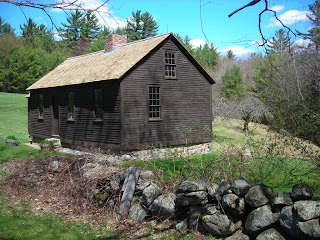 The birthplace of Daniel Webster, which is located off of NH 127 near Franklin. On these long day trips, I do like to visit some attractions that are off the beaten path, in the hopes that I may learn about something I otherwise would have not learned about. Daniel Webster did a lot in his life, as he was a lawyer and a statesman, which was far beyond the reach of the little house that he was born in. 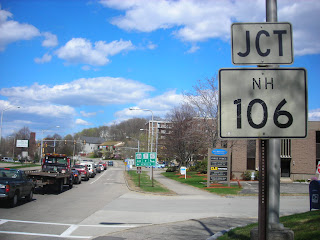 Probably my find of the trip as far as signs and shields go, an old NH 106 shield on NH 11A in Laconia. I do know that NH used square shields at one time, but I was unaware that the state initials were also included on the shield itself. Other interesting route markers that I saw was an inverted (white numbering on a black background) NH 127 shield in Franklin, and two uni-signs with green-on-white NH 13 and NH 114 shields included in Goffstown. 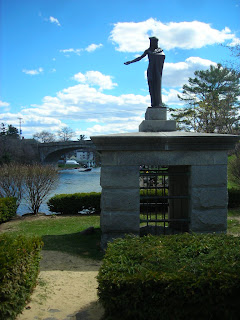 Endicott Rock, which is located at the outlet for Lake Winnipesaukee in Weirs Beach. Endicott Rock once marked the northern boundary for the Massachusetts Bay Colony. 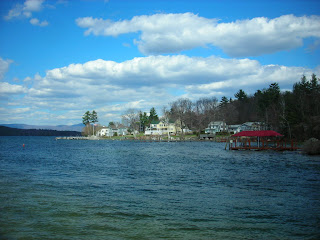 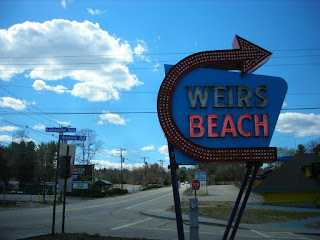 Weirs Beach itself has a summer destination feel to it, quite like Lake George here in Upstate New York. 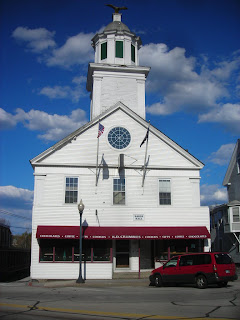 Eagle Hall, at the town green in Milford, New Hampshire. This was the first town meeting house in Milford, and is now a bakery. 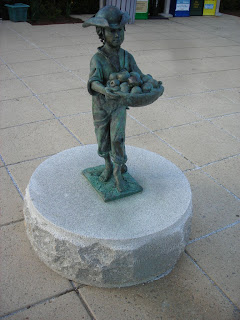