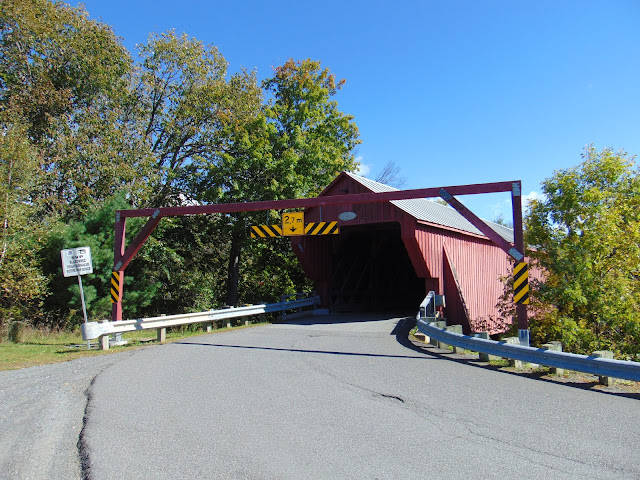 Located in Cowansville, Quebec, the Freeport Covered Bridge (or Pont de Freeport, in French) was built in 1870 and spans 91 feet long over the Yamaska River, west of downtown Cowansville. The covered bridge was constructed in the Town through truss design that is fairly common throughout Quebec. The covered bridge and the former village of Freeport where the Freeport Covered Bridge is located was built was named for Freeman Eldridge, who was a builder in the region which include built the first Anglican church in Freeport in 1855. The former village of Freeport, along with the former villages of Sweetsburg and Nelsonville, were combined in 1876 to form Cowansville.

This historic covered bridge as led a quiet existence for most of its lifespan so far. The Freeport Covered Bridge underwent some renovations in 1992, where steel support was added to its infrastructure. In 2014, modern street lighting was added to the bridge. Additional restorations were made with the addition of headache bars after being damaged twice by large trucks over the years. There is a sign on both sides of the bridge asking cars to honk before entering its dark interior, as it is a narrow one lane bridge. The covered bridge is a local attraction and you have the opportunity to enjoy the surroundings of this bridge with its distinctive red color paneling. Picnic tables and parking was added for tourists to come to visit, plus there is a small trail that allows you to get some sneak peaks of the bridge from a different angle.