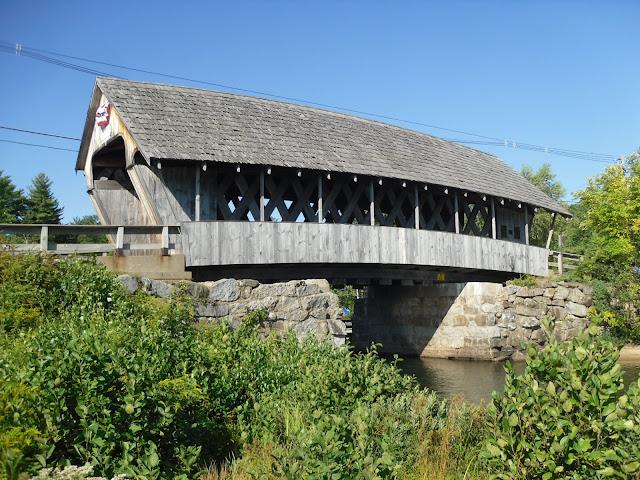 The Squam River Covered Bridge (or the Squam Covered Bridge) is located where the Little Squam Lake meets the Squam River in Ashland, New Hampshire. It is a 61 foot bridge that was constructed in 1990 using a Town lattice truss design by the famed covered bridge builders Milton Graton & Son, also of Ashland, New Hampshire. The bridge also features a walkway on the Little Squam Lake side of the bridge, so people who are passing by can admire the scenery of the nearby lake.

The covered bridge replaces a steel and concrete bridge that had been condemned by the State of New Hampshire on River Street in Ashland. After the condemnation, the state proposed building a two lane steel and concrete bridge for this site. However, the citizens of Ashland balked at this proposal, deciding that they would prefer a one lane covered bridge built in its place. At the 1988 town meeting in Ashland, the town voted to place $35,000 in a fund earmarked for building a new covered bridge. The balance of funds needed for this project were raised by the Squam River Covered Bridge Committee of the Ashland Historical Society, who still hold the funds today which can be used for necessary repairs for the bridge. Additional funds for the initial bridge construction were raised through special events such as bake sales and dinners, but the bulk of the money came from direct contributions from over 500 donors.

The Squam River Covered Bridge fits seamlessly into the landscape. Whether you are taking a boat out onto Little Squam Lake, or taking a dip in the lake at the nearby beach, the covered bridge serves as a nice reminder of New Hampshire's heritage. While the covered bridge is newer and not yet ready to be placed on any historical registers, it has become a classic in its own right. I had the chance to check out the covered bridge in Ashland on a glorious summer morning and got to enjoy what the bridge has to offer.