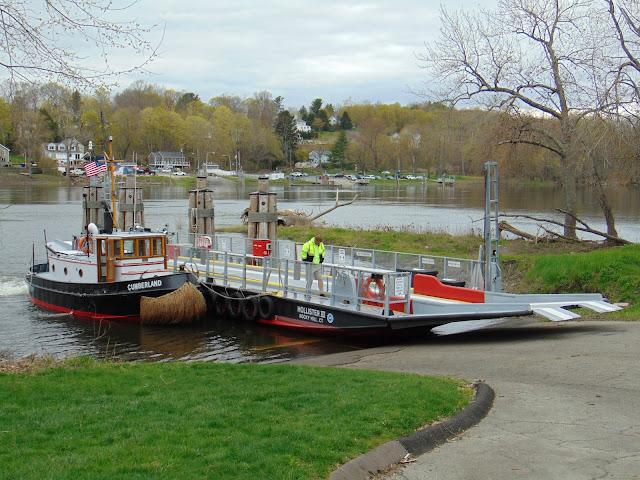 One of two ferries crossing the Connecticut River within the State of Connecticut, the Rocky Hill-Glastonbury Ferry is the oldest continuously operating ferry service in the United States and it crosses between Rocky Hill and Glastonbury, Connecticut. The original ferry, which dates back to 1655, was just a small raft which was pushed across the river using long poles. It seemed logical to these early settlers to cross the river along this stretch along the river, leading to what was then part of Wethersfield to become a natural port and an early center for shipbuilding, agriculture, and trade. At one time, a horse on a treadmill in the center of the craft supplied the power to propel the craft across the Connecticut River. In 1876, the ferry was modernize into a steam driven craft. Today's craft is an open flatboat barge named the Hollister III, which carries three cars at a time and is towed back and forth by the Cumberland, which is a diesel powered tugboat.

The ferry provides a convenient, direct link between Rocky Hill and Glastonbury at CT Route 160. Motorists traveling between parts of Glastonbury and Rocky Hill can cut nearly 8 miles off their trip if they use the ferry. For cyclists and pedestrians, the ferry is even more important since bicycle access to the Putnam Bridge (CT Route 3) between Wethersfield and Glastonbury is not allowed. The ferry is the only crossing of the Connecticut River for cyclists between Hartford and Middletown. Without the ferry in operation, cyclists and pedestrians face a detour of over 13 miles with no way to get across.
A ferry first linked the two communities when Wethersfield voted to lay out roads on both sides of the river, establishing a public landing in Rocky Hill. Joseph Smith, holder of one of the early land grants there, or Richard Smith, were the first ferrymen, and the privilege was passed down in their extended family. In 1724 the General Assembly affirmed the Smiths continued hegemony by formally granting the ferry right to Jonathan Smith, who was Joseph Smith's son, and set the toll rate for the ferry, which was four pence for each man, horse, and load, with persons on horseback at half rate, double on Sundays or during high water. Raft and later boats were propelled by oars, sweeps, poles or sails depending on conditions. When the river was in a flood stage, ferrymen had to skid their boats across inundated marshes and make for Glastonbury docks north or south of the regular landing. Equipment for the ferry remained relatively primitive until 1846, when an ingenious ferryman installed a horse powered treadmill on the deck of his flatboat.
While the ferry privilege had remained exclusively in the hands of Rocky hill residents for the first hundred years, during the last half of the nineteenth century, ferrymen lived on both sides of the river. Among them were William R. Bulkeley, who lived at Rocky Hill Landing, along with Anson Tryon and Robert Hollister of Glastonbury. Since other ferries that served nearby towns along the Connecticut River were no longer operating, the ferry was a lucrative side gig. The ferry became even more valuable after the Connecticut Valley Railroad came through Rocky Hill Landing in 1871, which made the ferry a vital link in a much wider inland transportation network. Since railroads continued to bypass the east side of the river, it was much appreciated by Glastonbury's mill owners, who ferried goods and across the river to be shipped by rail well into the 20th Century.
Perhaps in anticipation of the increased custom generated by the railroad, in 1866 Rocky Hill and Glastonbury paid Lyman Williams a $1,000 bonus to put a steam ferryboat in operation. When his lease was renewed in 1876, his partner was Martin F. Hollister, the son of Judge Martin Hollister of South Glastonbury. Centennial, their new steam ferryboat, remained in service until spring of 1888, when young Hollister, now the sole owner of the privilege, built a new vessel, The Hollister. Following a legal challenge to his ownership, however, in which the State Supreme Court ruled that the towns owned the ferry, Hollister "threw up" his right in 1893. Rocky Hill and Glastonbury jointly ran the ferry until it was taken over by the state in 1915. A steam-powered side winder, the Nayaug, provided service from 1903 to 1921. The present steel barge, Hollister III, with a three-car capacity, is towed by the Cumberland, powered by a modern marine diesel engine. They were designed by Walter McInnis (1893-1976), a naval architect and founder of the design and brokerage firm of Eldredge-McInnis of Boston, Massachusetts in 1926.

The Rocky Hill-Glastonbury Ferry almost ended service in 2011 due to budget cuts, as part of a plan to fill in a $1.6 billion hole in the state budget. While the ferry services a vital link in the transportation network of the State of Connecticut, it operates at a loss. However, cooler heads prevailed and the ferry was allowed to continue operation. The Rocky Hill-Glastonbury Ferry currently operates between April 1 and November 30, which exceptions for flooding and Thanksgiving Day. I've taken the ferry and found it to be a relaxing alternative to crossing the Connecticut River. The crossing takes just a few minutes. 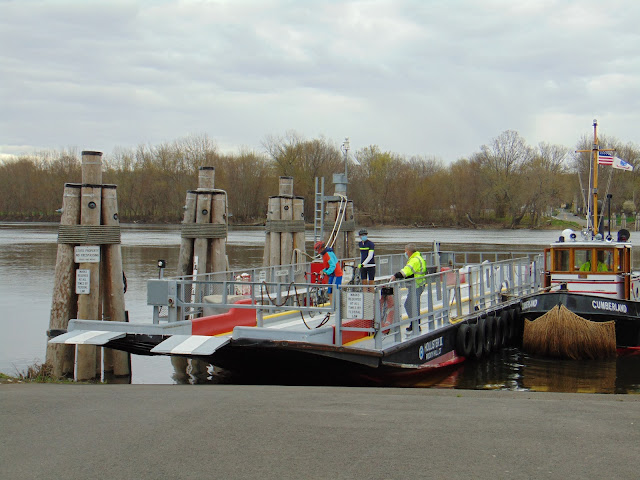 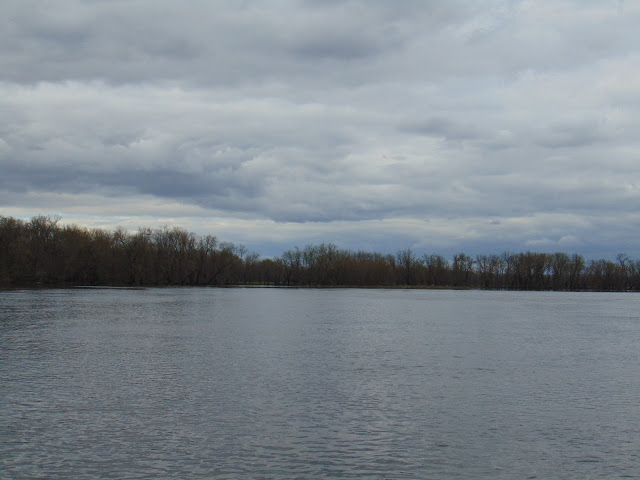