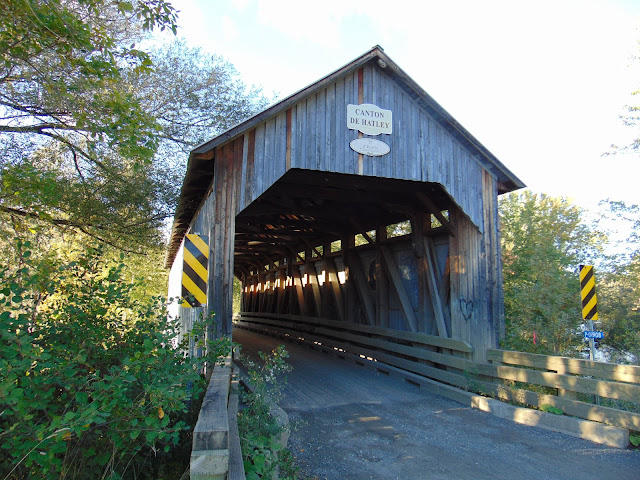 Located near the former mining town of Eustis, the 90 foot long Eustis Covered Bridge is one of three covered bridges located in Quebec's Eastern Townships region that features a multiple Kingpost truss design. Built in 1908 over the Massawippi River at a scenic spot along Rue Stafford, the Eustis Covered Bridge is one of the last remaining remnants of the once thriving copper mining town of the same name. A century ago, the village of Eustis hosted a large mining complex, a number of company houses, general store, church, train station, and a baseball team. The covered bridge is open seasonally, from around April 15 to November 15 of any given year.

Like many covered bridges, the Eustis Covered Bridge has had a tumultuous history, having been saved from demolition during the 1990s and then later restored. After being improperly restored in 1998, the bridge was closed to traffic in 2008. Restoration to the covered bridge took place from June 2011 to November 2011, and then reopened to traffic in April 2012. The work for restoring the bridge to prime condition was completed by Hamlet Heavy Timberwork, Ltd. of Rigaud, Quebec at a cost of $596,000.

During the restoration, the bridge was hoisted off of its abutments, dismantled, and transported in pieces to an off site location. With exception of the original corner braces and some of the rafters, however, most of the truss work for the bridge was been replaced with new timber. The trusses were replaced because of a previous, poorly executed repair job some years ago which involved “cutting sections of the trusses, rendering the trusses ineffective. As a result of the restoration, the trusses were returned to their actual load bearing role, and the proper camber arch was restored to the lower chords of the structure.

I had the opportunity to visit the Eustis Covered Bridge and found a pull-off along the road near the bridge. From the pull-off, there is a short walk to the bridge and it is an easy bridge to explore.