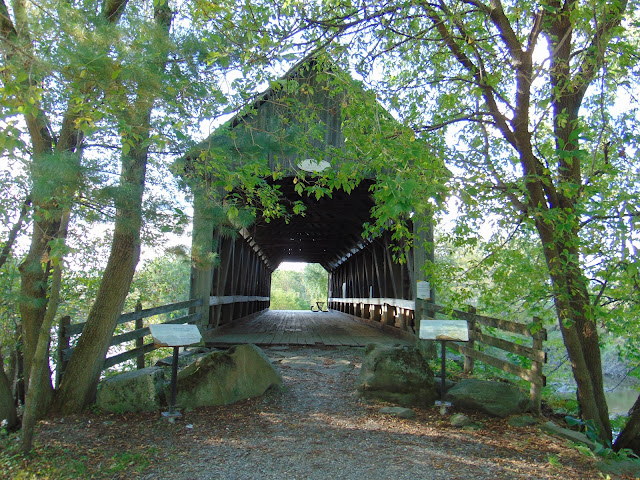 Originally known as the Spafford Covered Bridge after a family that once owned land nearby, the Drouin Covered Bridge was constructed between 1886 and 1889 and is the second bridge to be located at this site across the Coaticook River. Located in the Eastern Townships of Compton, Quebec, the Drouin Covered Bridge is built in a multiple Kingpost design at a length of 98 feet. Wooden plank drop siding and a portal without jamb are featured in its construction. No longer open to vehicular traffic, the bridge is located off of Chemin Drouin between Waterville and Compton, near a landing where you can take small boats that allow you take in the views of the covered bridge.

In 1886, the first Spafford Bridge collapsed under the weight of Patrick Ryan along with his horse and wagon. Due to the unfortunate event, Ryan sued Compton Township for $275, eventually settling with the township for $100. At the same time, arrangements to construct a new covered bridge were underway. A contract was awarded to Daniel Saultry for $908.50 and construction for the new bridge was completed in 1889. During the 1960s, the bridge's span was reduced with the addition of a steel pier at the bridge's west abutment and strengthened with the addition of steel beams underneath each end of the timber trusses. Around 1980, the covered bridge could no longer support heavy traffic and a new parallel bridge was built to the north.

While the covered bridge was no longer open to traffic, additional changes were coming to the bridge. In 1989, the name of the bridge was officially renamed as the Drouin Covered Bridge, in honor of the family that occupied the nearby lands for four generations following the departure of the Spaffords. By 1998, the covered bridge was faced with demolition due to its deteriorating state. Fortunately, a group organized and ran a fundraising effort to the save the Drouin Covered Bridge. Renovations took place in 2004 and 2005 at the cost of $130,000.

Today, you can visit the Drouin Covered Bridge for passive recreation. There is a small parking area located near the bridge and there are some interpretive signs that tell of the bridge's history and design. It is a short walk to the parallel bridge if you want to get some additional photos of the covered bridge. The Drouin Covered Bridge stands as a testament to the history of the Eastern Townships region and the people who made it what it is.