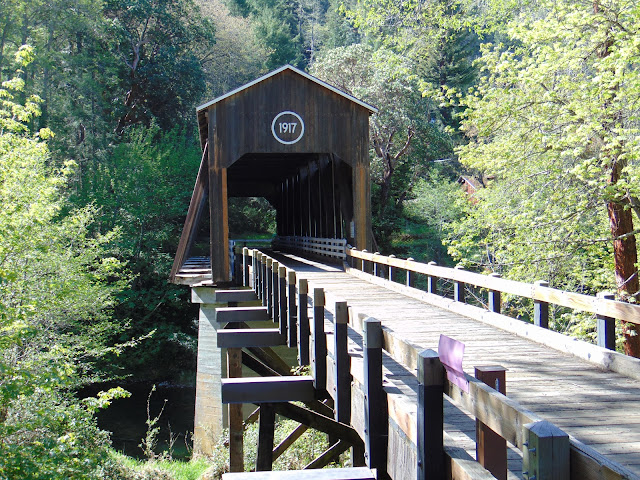 The McKees lived on a ranch south of the bridge site and their home served as a stage station and halfway point between Jacksonville, Oregon and the Blue Ledge copper mine and town just over the border into California. Lindsay Applegate, for whom the Applegate River is named, prospected the area on the way to the mines in California. The discovery of prosperous mines caused the development of a north-south route in the area, and the covered bridge along with the McKees' ranch were used as a rest stop, due to its location roughly halfway between Jacksonville and the Blue Ledge Cooper Mine to the south. Horses were kept at the ranch for the six or eight horse teams that were hauling ore from the mine, and lodging and board were provided for travelers. When the Blue Ledge Mine opened in 1906, it created an extensive amount of traffic on the Applegate Road. There were two river crossings at the time, Nick Wright’s Ford about three miles upriver, and John Wright’s Ford about five miles downriver. These fords were difficult for the horse driven wagons with their heavy loads of ore. Eventually, Jackson County did away with the fords by building the Eastside Road. Though the new road was an improvement, the road was treacherous depending on road conditions. If you explore the McKee Covered Bridge, you will be able to see remnants of the old road leading up to the Eastside Road.

Finally, in 1917, two wooden covered bridges were built, McKee and Cameron, located about 4 miles downriver along the Applegate Road. This diverted traffic to the west side of the Applegate River, bypassing the hazardous area. The original structure had no openings on the sides, and after a collision it was realized that there was a need for openings on the south side wall so that traffic on the bridge or those approaching from the south could see each other on the single lane bridge. The McKee Covered Bridge was used from 1917 to 1956, originally serving the local mining and logging traffic. In 1956, the bridge was declared unsafe for vehicular traffic. As a result, a new concrete bridge was built nearby and the McKee Covered Bridge went to fallow for a while.

It was not until 1965 when the combined efforts of the Talisman Lodge, Knights of Pythias, Upper Applegate Grange, and the Jackson County Court restored the roof after damage caused by flooding in 1964. This kept the aging bridge open for pedestrian use. However, little upkeep followed, and by the early 1980s, Jackson County officials were worried about the strength of the bridge, which led to Jackson County ceasing financing ongoing inspections and repairs in 1985. During the summer of 1985, more than $40,000 in labor and materials were dedicated to repair the bridge and keep it open for pedestrians. Jackson County officials then announced that future county investment in the bridge would be impractical, and has looked to private efforts for ongoing preservation of the McKee Covered Bridge, which led to the community forming the McKee Committee in 1989, and later, the McKee Bridge Historical Society. Any bridge restorations are now funded by grants and fundraising.

Unknown said…
I greatly enjoy this article, the lovely photos, and the link to the McKee Bridge Historical Society website. I would offer one correction: Lindsey Applegate did not prospect in this area at any time. He traveled down ranges far to the west, looking for a pack route, and happened to glimpse a river and valley that became associated with this name. There is no indication that Lindsey ever set foot in Applegate Valley proper, and he certainly was never in the area where McKee Bridge now stands. The very first prospectors reached here in 1852, William Dorn and J.J. Elliott in particular.