Wherever you travel around the planet, you are bound to find some roadside oddities along the way. Sometimes it may be something interesting that has meaning to the town or city that you are passing through, or it may be the world's largest item of that kind. In New York State, there are plenty of roadside oddities to see as you travel the highways and byways of the Empire State. These are a few of their stories...

If you are traveling on US 11, NY 58 or NY 812 in northern New York State, you may drive through Gouverneur, located in western St. Lawrence County. The town and village were named after Gouverneur Morris, who was a signatory of the Articles of Confederation. As you drive through the downtown area of Gouverneur, you are probably wondering why there is a giant metal replica of a roll of Life Savers. 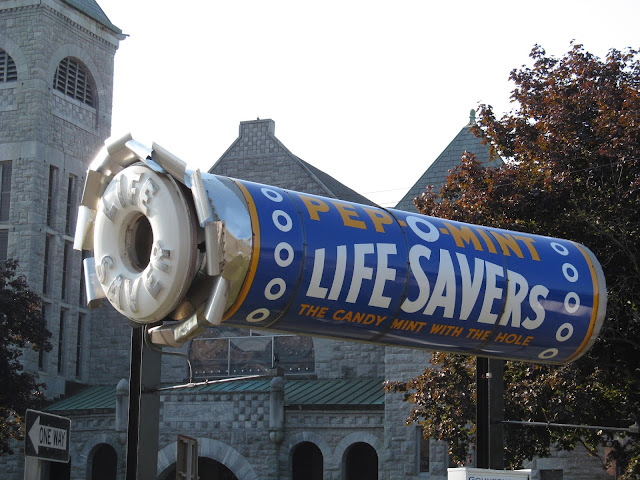 Life Savers owes its success to a native of Gouverneur, Edward John Noble, who made his fortune as an owner of the Life Savers Candy Company. The giant roll of Life Savers once stood at the Life Savers factory located in Port Chester, NY and was given to Gouverneur after the factory closed. It was erected in its current spot in 1987. 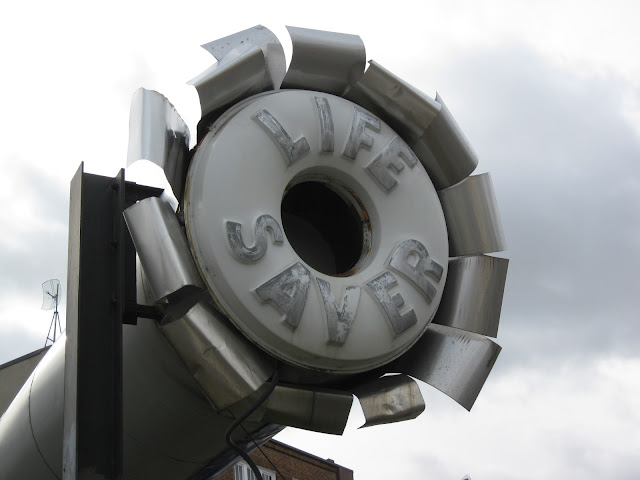 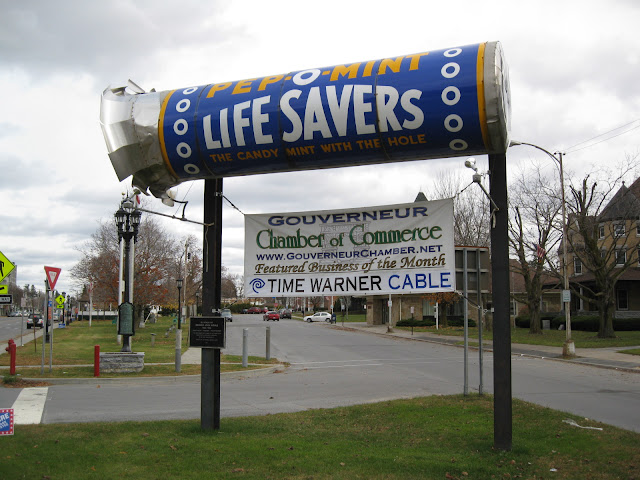 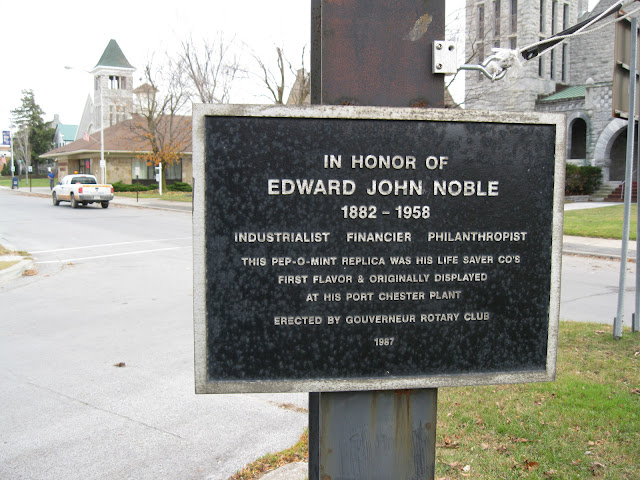 Our next stop in our whirlwind trip of roadside oddities around the Empire State takes us to the East End of Long Island, home of one really huge waterfowl. 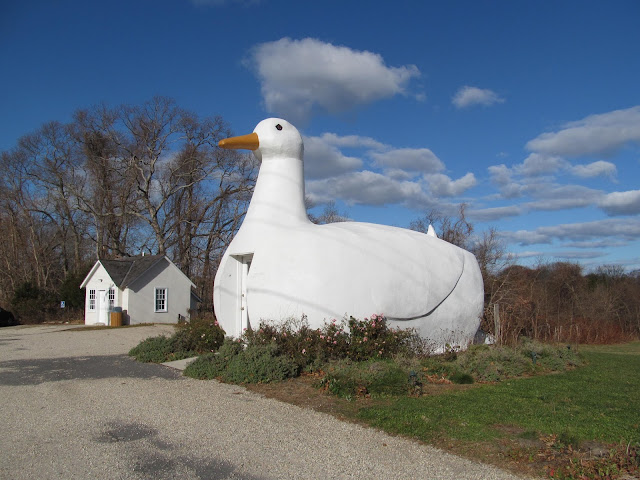 Ducks and duck farming are synonymous with Long Island. Duck farming was once a big industry on Long Island. There is a minor league baseball team called the Long Island Ducks. A few of their players also played in Major League Baseball over the years, such as Edgardo Alfonzo and Juan Gonzalez. There was also a hockey team called the Long Island Ducks, who played at the Long Island Arena in Commack during the 1960s and early 1970s before the New York Islanders came to be. One of their head coaches, John Muckler, later won a Stanley Cup as head coach of the Edmonton Oilers. But perhaps the most famous duck on Long Island is the Big Duck, located on Big Duck Ranch in Flanders.

If you have ever traveled along NY 24 on the East End of Long Island, you likely would have seen (and possibly taken photos of) The Big Duck. Standing tall at 20 feet from the base to the top of the head, The Big Duck is 30 feet long from beak to tail, 15 feet wide from wing to wing, and sports two Model T taillights for eyes. This Long Island landmark was once a shop for a duck farm during the 1930s and was built in the style of unique roadside architecture of the day. Years later, after the Big Duck had changed hands through multiple owners, a couple of moves and possible demolition during the 1980s, the structure was donated to the Suffolk County government in 1987, who owns the Big Duck to this day. It was placed on the National Register of Historic Places in 1997 and has also inspired a term called duck architecture, lending to the Big Duck's original role of selling duck products inside of a structure that looks like a duck. The Big Duck is still selling products, but rather as a gift shop selling duck themed goods. 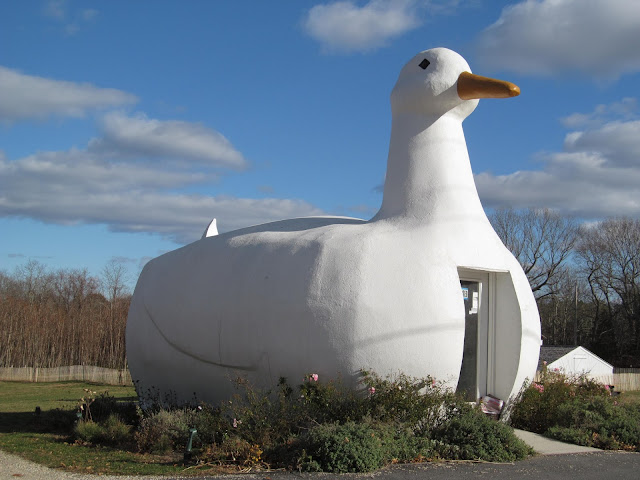 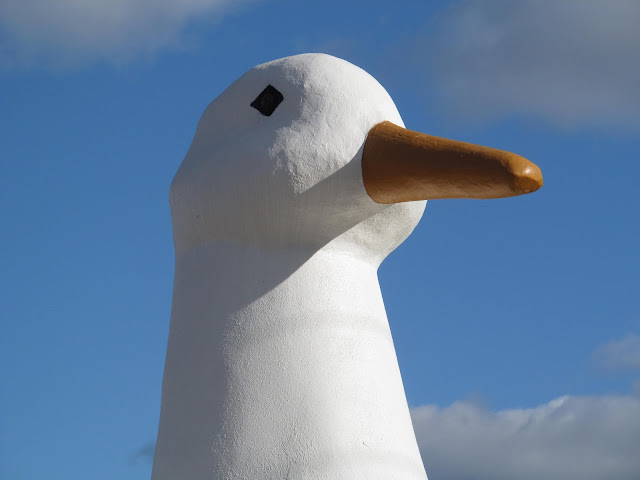 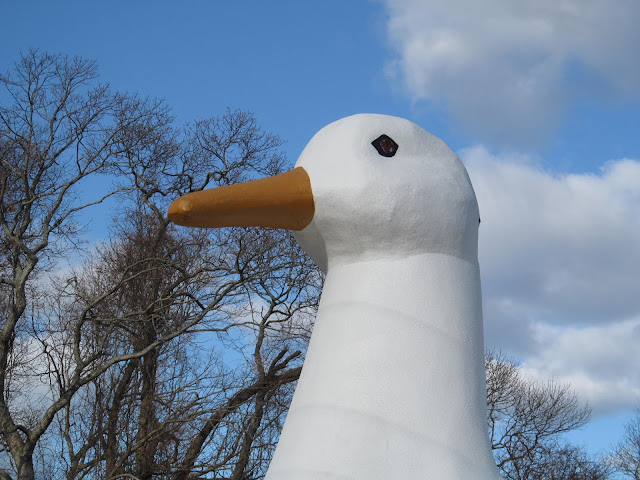 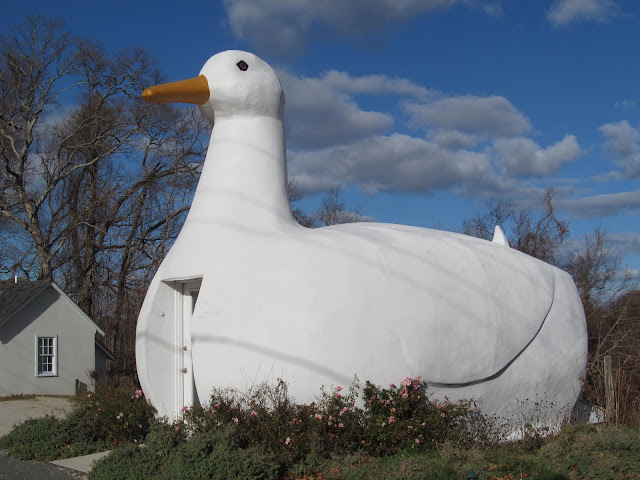 Our next stop brings us to a mainstay of the basketball world that first made its appearance right in Central New York State. 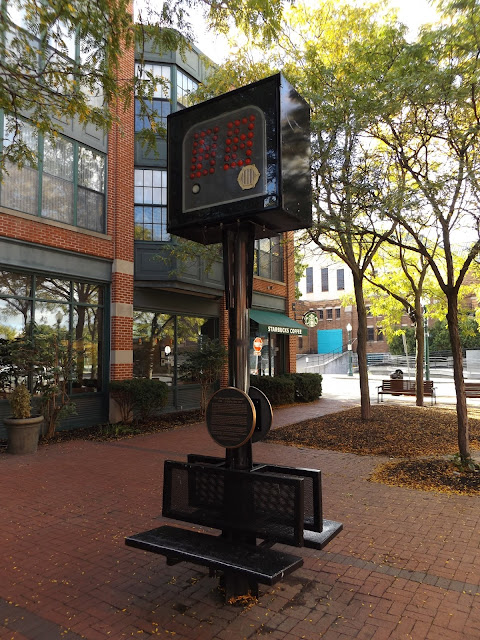 In the Armory Square neighborhood of downtown Syracuse, there is a replica of the 24 second shot clock used in basketball. You may be asking yourself, that sounds odd, why would a shot clock be on a sidewalk in Syracuse. Syracuse University basketball is a big ticket item in the Salt City, but the shot clock was not an invention of the university.

Back in the days of yore, basketball was a much lower scoring affair than it is today. It can be said that the low scores of games were threatening the very sport of basketball, which is meant to be fast paced. In order to speed up the game, Danny Biasone of the Syracuse Nationals (now the Philadelphia 76ers) experimented with using the 24 second shot clock, first at a scrimmage at the Blodgett Vocational High School in Syracuse in 1954. The time limit of 24 seconds was decided by dividing 2880 (the number of seconds in a 48 minute game of basketball) by 120, which was what the average number of shots in a game of basketball. The experiment worked as it caught on quickly with other NBA owners of the time. The 24 second shot clock is now used in most levels of basketball, but in many cases, different times are used. The NCAA uses a 35 second shot clock for instance, as opposed to 24 seconds. 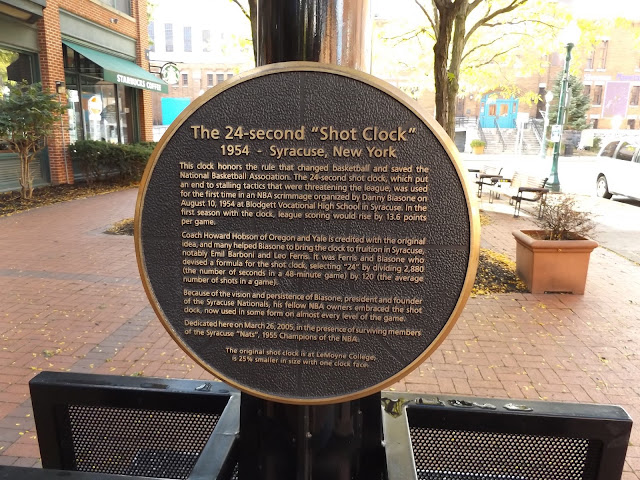 Next, we go to the capital city of Albany and see a piece of music and technology history. 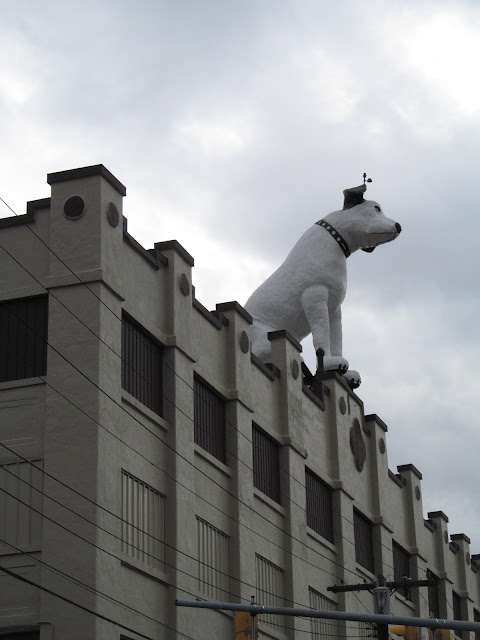 One of Albany's iconic sights is of the Nipper statue. Located on Broadway in the Warehouse District north of downtown Albany, the 28 foot tall and 4 ton statue is made of steel and fiberglass. Nipper sits on top of a warehouse that was once home to RTA, an appliance distributor that sold RCA products. With Nipper being a symbol of RCA, it was only natural that a Nipper statue found its home on top of the building, where the statue has been since 1958. Nipper also features a small light that is used as a beacon for aircraft, as it was one of the taller structures in Albany.

The Nipper statue in Albany is only one of two Nipper statues remaining in the United States. The other is located in Baltimore, Maryland. The unique status in Albany of the Nipper statue has also given way to an art exhibit, with various smaller versions of Nipper being found throughout Albany. 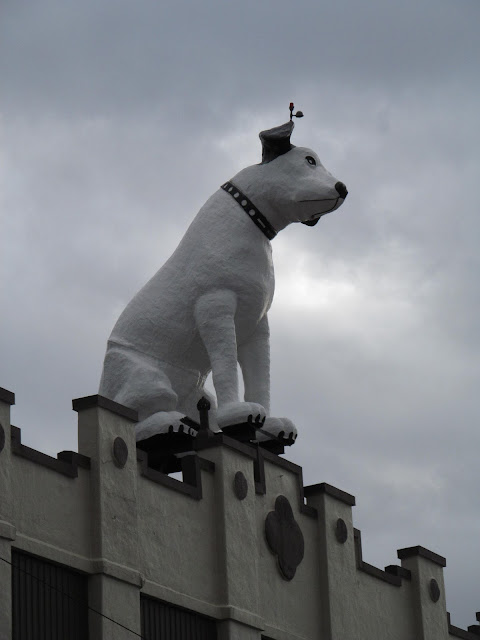 Next, we head to the Catskills and go inside to take a look at one of the world's largest things. 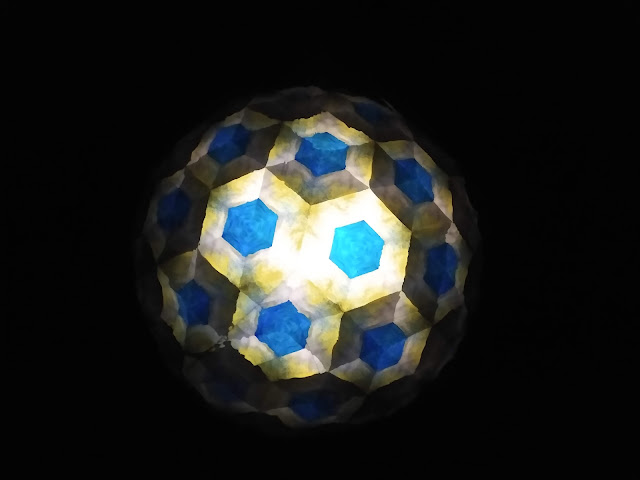 After hiking up and down nearby Tremper Mountain, I decided to celebrate by doing something nearby and also unique. Since I was smack dab in the middle of the Catskills in the town of Mount Tremper anyway, I decided to head up to the Emerson Resort & Spa on NY Route 28 and check out the World's Largest Kaleidoscope. I have driven past the kaleidoscope a number of times before and had wanted to check it out.

If you are visiting the World's Largest Kaleidoscope, you can pay a $5 admission (but for children aged 11 and under, it is free) and get treated to a 10 minute kaleidoscope show in the silo. There are a few different shows that are run throughout the year and I got to watch an outer space themed kaleidoscope show.

The kaleidoscope show is an interesting visual and sound experience. When you are inside of the silo, you are also entering the World's Largest Kaleidoscope. The kaleidoscope’s main presentations utilize video playing off a three dimensional, three mirror system that creates a pyramid tapering from 15 feet at the bottom to five feet at the top, which reflect a constantly evolving virtual sphere with a 50 foot radius. With the use of projected moving images and mirrors from the top of the silo, the World’s Largest Kaleidoscope replicates the kind that you hold against your eye and manipulate by turning your hand. During the show, you can either lie on the floor (don't worry, the silo has been modernized, carpeted and is climate controlled) or lean on one of their standing chairs, which may work better if you are not too tall.

The northeastern parts of Westchester County are a nice mix of rolling countryside, stately homes, equestrian centers and historic communities. It is an enjoyable area to drive around and explore, especially with it being so close to New York City. In one of these communities, North Salem, is a bit of a geologic oddity, the Balanced Rock. 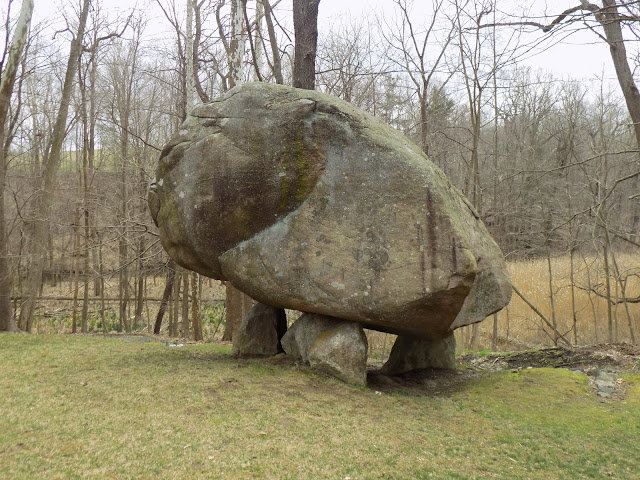 The Balanced Rock is located right in the heart of North Salem, next to the Cable Barn and Union Hall. There is not much parking in the area, but I was able to park on a side street and walk a few minutes to Balanced Rock. Widely thought to be a glacial erratic, Balanced Rock is a large stone that happens to be resting on three smaller boulders. Estimated to weigh about 60 tons, the balanced rock is composed of a type of granite that is not normally found around North Salem, but may have been pushed from the Hudson Highlands by glaciers during the Ice Age. There are plenty of examples of glacial erratics, between pebbles and larger boulders like this one. This is likely how the Balanced Rock wound up at its current resting place.

There is also the possibility that Balanced Rock is an ancient worshiping site by local Native Americans or a dolmen used as a Celtic ceremonial stone that was used to remember the dead. Having seen other balancing rocks, I tend to agree with the theory that it is a glacial erratic. Regardless, it is a nice, quick stop if you are in the area. 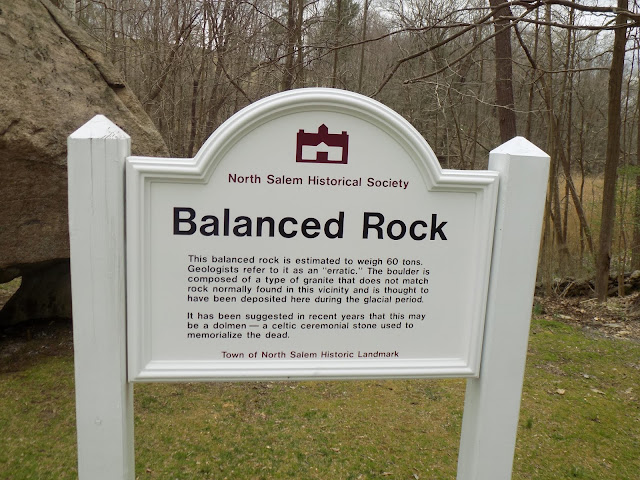 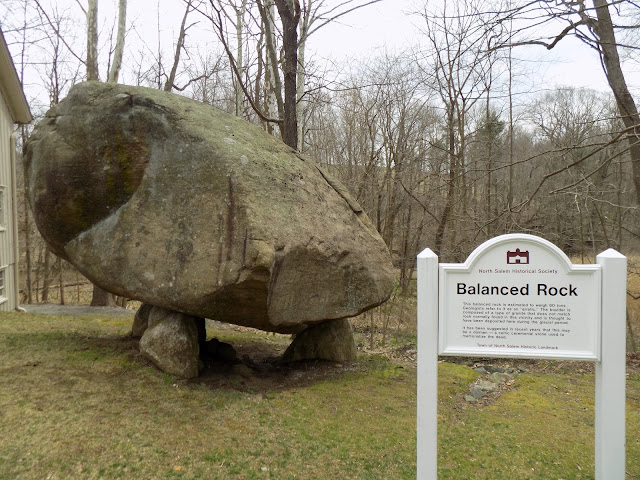 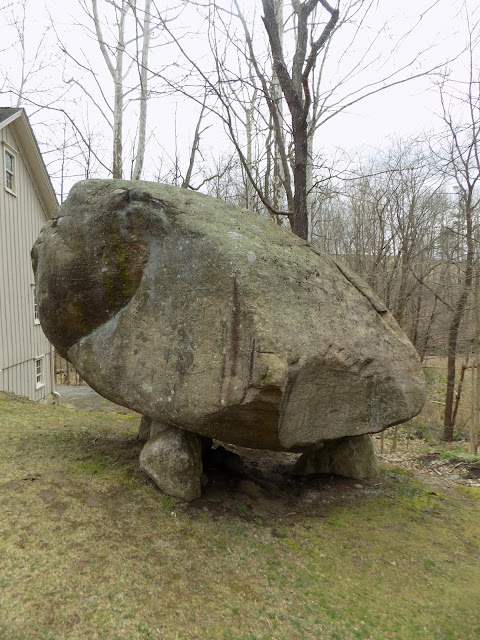 We turn our attention to Western New York now, to the Grant Club pole, a pole that was put up in honor of President Ulysses S. Grant. During the 19th Century, it was the custom in Presidential campaigns to raise a pole to honor the candidate. When President Ulysses S. Grant campaigned for a second term for President of the United States in 1872, the Akron Grant for President Club, raised their first oak pole, which was replaced in 1904. Both poles came from the Dexter Denio farm on the main road to Akron, which was located at the junction of NY 5 and NY 93. That oak pole became a landmark for the Akron-Newstead area, in eastern Erie County. The third oak pole, which is the current pole, was erected at the junction of Buell Street and Clarence Center Road, near the entrance to Akron Falls County Park in Akron and was dedicated on July 4, 1988. 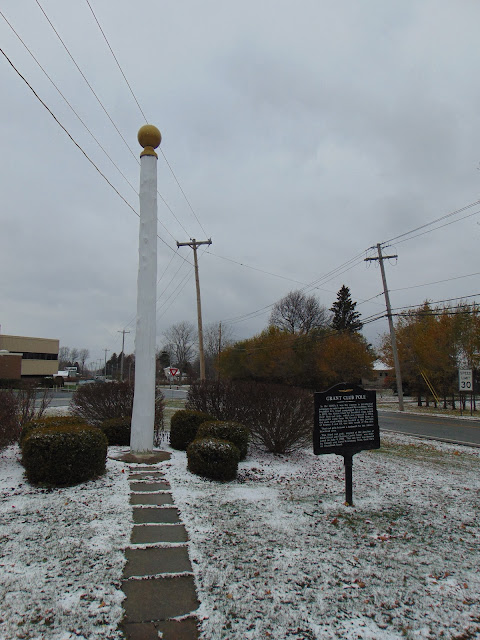 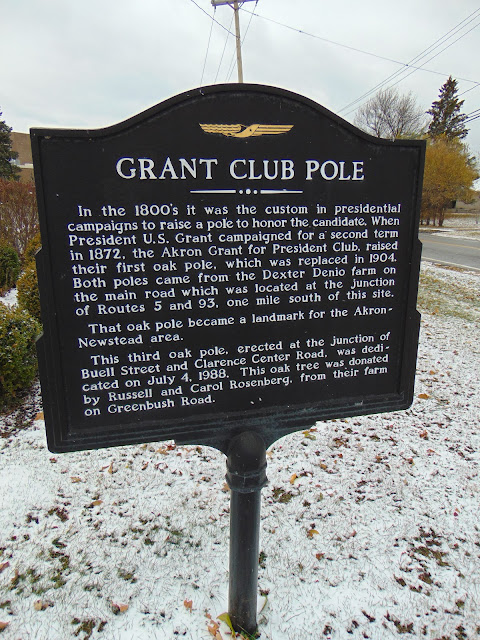