MassDOT emphasized during the run up to the project on what the benefit would be to the traveling public of having exit numbers matching mileposts. But in some cases, due to MassDOT's numbering policies, this was not the case.  A few examples:

Route 2 in the Lexington area

MassDOT did not want to many exits with the same number but different letters. This meant that in some cases they played with the numbering in areas with a large number of exits. One case was in Lexington for Route 2. Therefore, those who were excited to learn that the milepost for the I-95 exit was 128, looked forward to a number that would advertise the concurrent route that has been banned overhead signs by the FHWA. However, MassDOT decided it would be Exit 127 instead.
This was done so that fewer lettered exits would exist to the east. This, however meant the next 2 exits were a mile off from the exit number, lessening the benefit of the new numbering system.

The problem was worse along Route 128 in the Beverly area. Here several exits did not match mileposts because MassDOT wanted to give different numbers to closely spaced exits in Danvers. Therefore several exits were 2 miles off the number on the closest milepost. 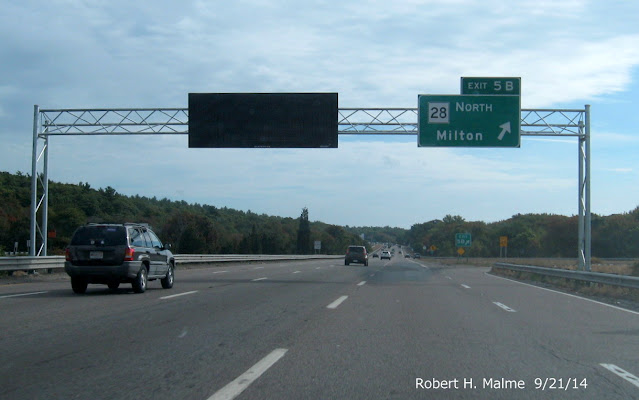 The MA Route 28 North exit sign on I-93/US 1 North would better match the highways mileage if it was Exit 4 B.

The placement of these supplemental yellow signs (green on Cape Cod) were advertised by MassDOT to be placed at the 1 mile advance and at the gore sign. For the most part this was done.

Location on other advance signs

Located at, or near, Exit Signs

There are many examples of Old Exit # signs appearing at 1/4 mile advance or on the exit signs themselves. This would seem to be not very useful for a driver trying to find the old number starting 1, or even 2 miles off. 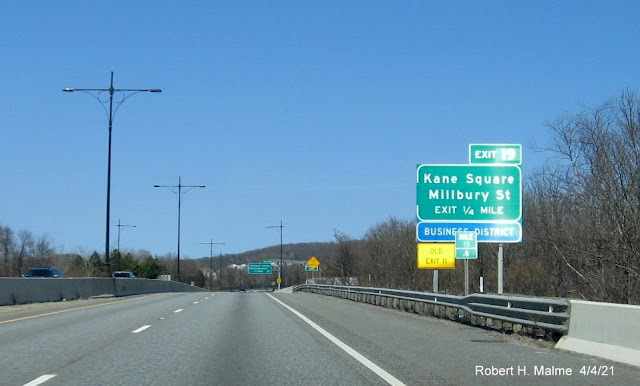 A similar inconsistency was found among ground mounted exit and auxiliary signs. Some times the font was too big. 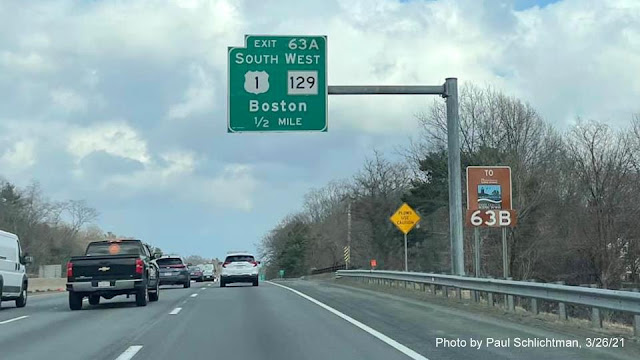 Apparently the contractor thought this auxiliary for the Essex County Scenic Byway was for a standard size brown sign. 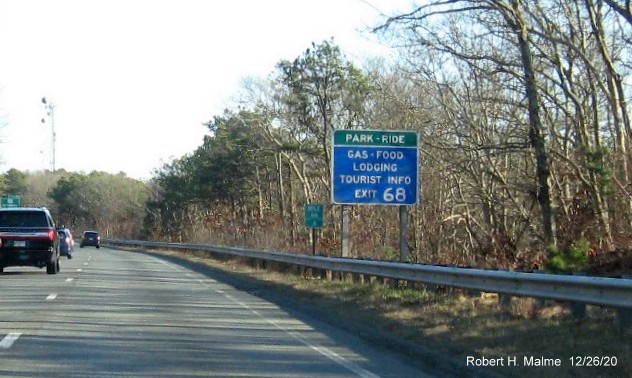 This sign on US 6 west also has a overly large number overlay. Was this to get back at all the Cape residents who vociferously opposed the renumbering of Cape exits?

Numbers that are too small

There were several cases also of a overly small font used for new numbers. 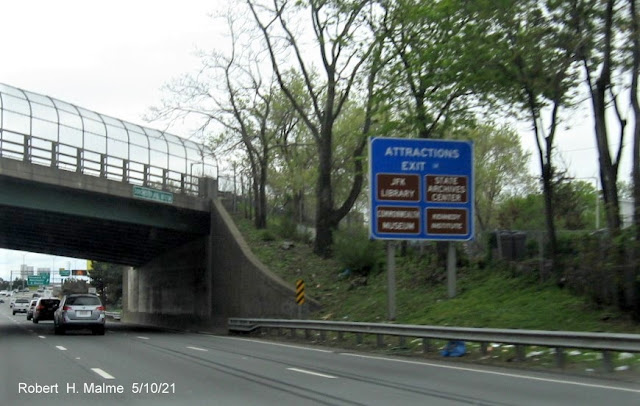 Can anyone seriously be expected to see this number on I-93 South traveling by at (least) 55 MPH?

Again, for overhead advance and exit signs there were too many cases where non-standard size numbers or ones using different fonts were used. There didn't seem to be any pattern to when different fonts would show up. 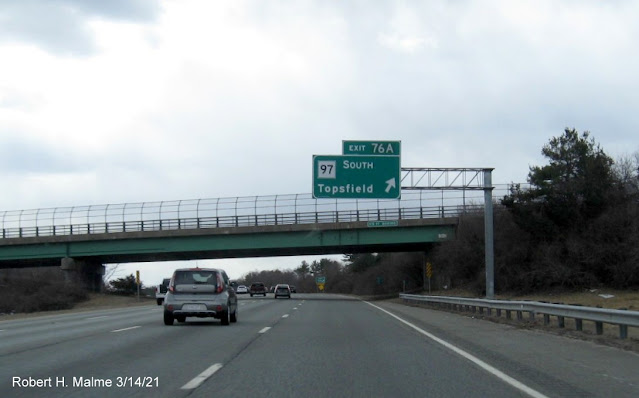 The overlay for the MA 97 exit on I-95 South features a too large number and non-standard font.
Sometimes the font was not that bad, but the number was put up off-center. 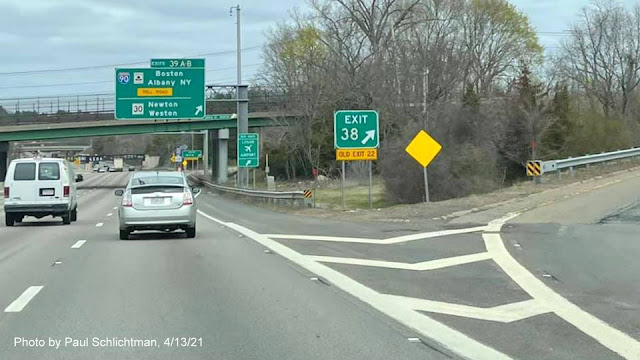 On I-95 North in Weston, instead of centering the smaller number (previous tab read Exits 23-24-25), the numbers were put to the left, the numbers are to the extreme right on the I-90 exit gore sign seen in the distance.
Sometimes, like with the gore signs, the number was too large. 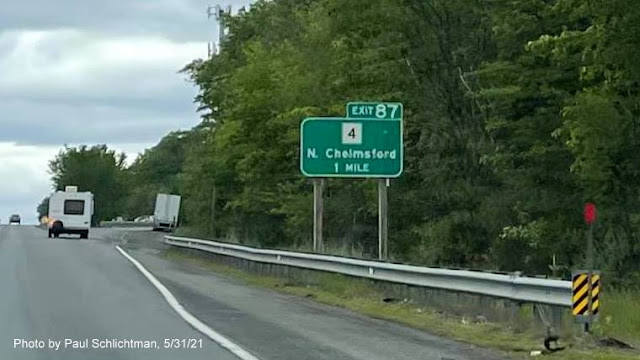 The number barely fits in the tab for this temporary 1 mile advance on I-495 North. 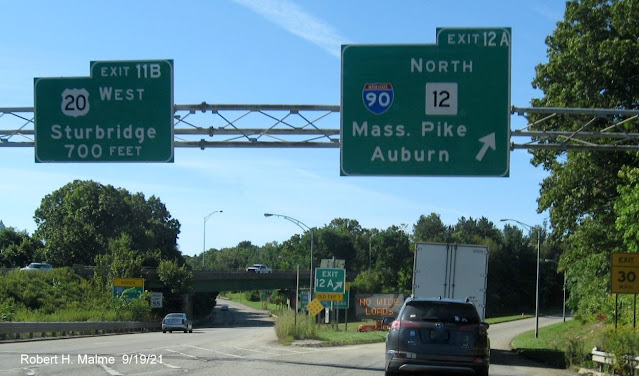 The I-290 exit sign for the Mass Pike and MA 12 exit features a number in the wrong font and far to the edge of the sign (this is to be replaced soon, hopefully fixing the problem).

MassDOT decided that it would keep the continued exit numbering from I-395 that existed with the sequential numbers along I-290 from the Mass Pike to I-495. In the hopes of reducing the confusion since the I-290 mile markers would not match the new exit numbers, they decided to put up dual mileposts, pairing the I-290 markers with ones showing the combined I-395 and I-290 mileage. They, however, decided to put I-395 shields on the whole mile markers, even though the route does not now run concurrent with I-290. That would seem to cause confusion in its own right. MassDOT indicated that it might consider a proposal to extend I-395 over I-290 and removing the latter interstate if they deem the current system causes too many problems for motorists. A fait accompli? 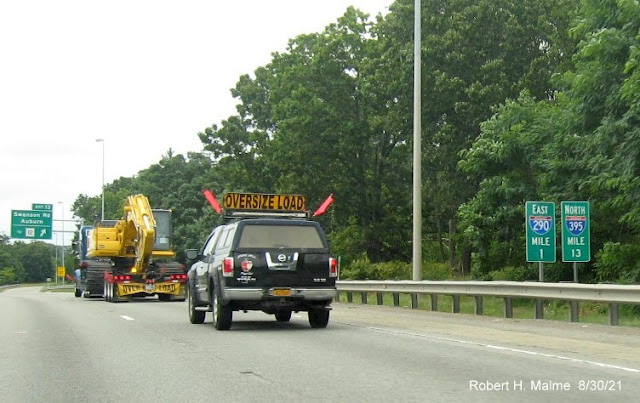 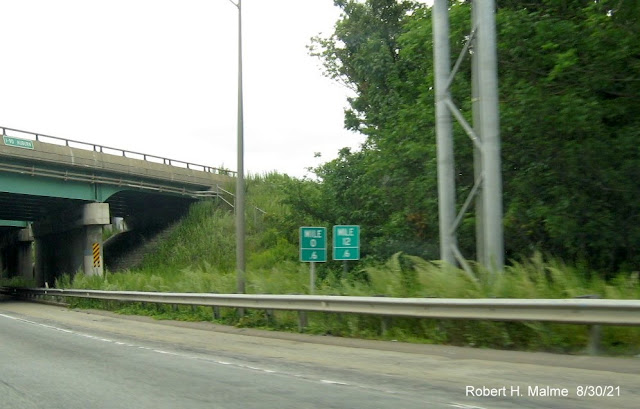 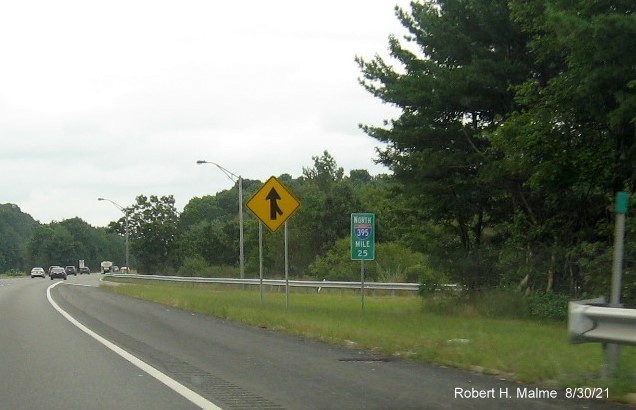 Sometimes they placed a new I-395 marker where the I-290 one was missing, while not replacing the I-290 marker. Would anyone think they are on I-395? 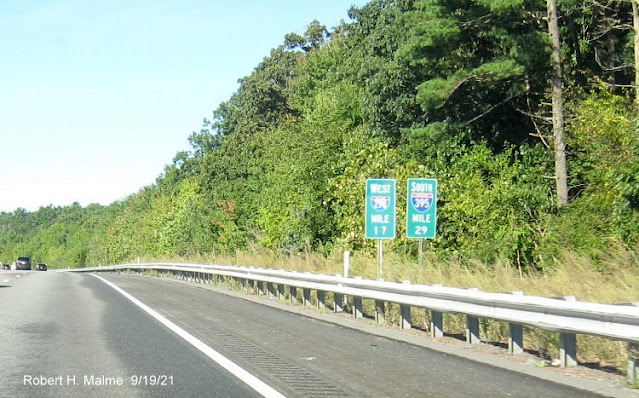 A pair of westbound markers on I-290 in Northborough.

Finally, here are some of the more interesting goofs seen during documenting the exit renumbering project, most of which, if not all were fixed later.

Did you forget something? 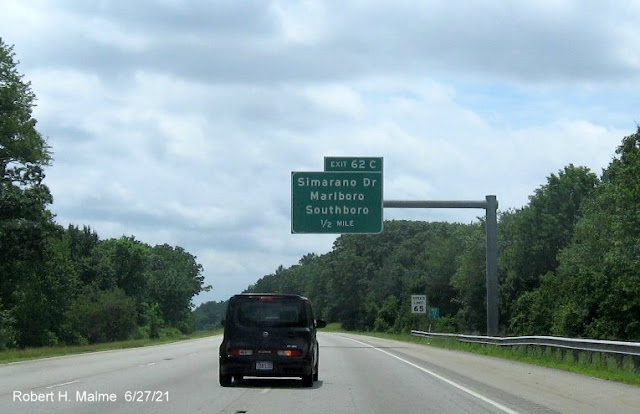 For the Simarano Drive exit signs on I-495 South in Marlboro the C from the previous sequential number was not removed from either the advance, exit or gore signs when the new number was put up. 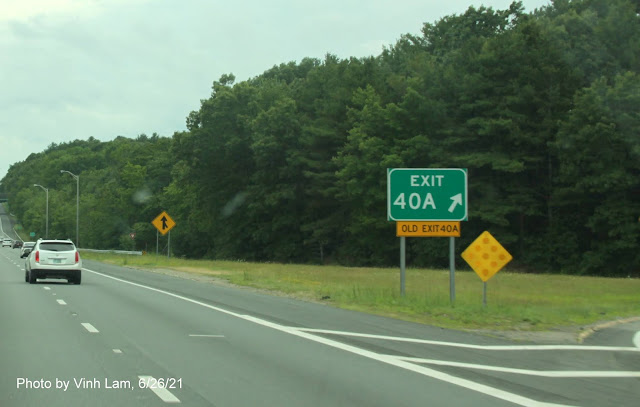 A quite common error was the adding of the yellow new exit number sign but not changing the gore        sign itself, here for the I-93 South exit on I-495 South. 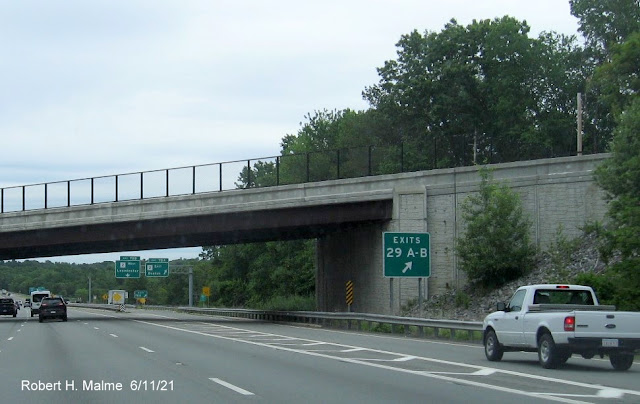 And another one from I-495 North. Here the numbers on the Route 2 gore sign were not changed. 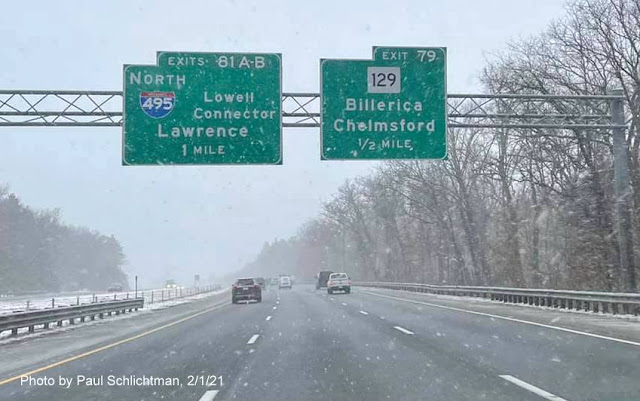 While it looks correct on the sign on the left, the actual exit numbers are 80 and 81A, this was quickly     fixed. Though you could say the order of he exit numbers is still wrong... 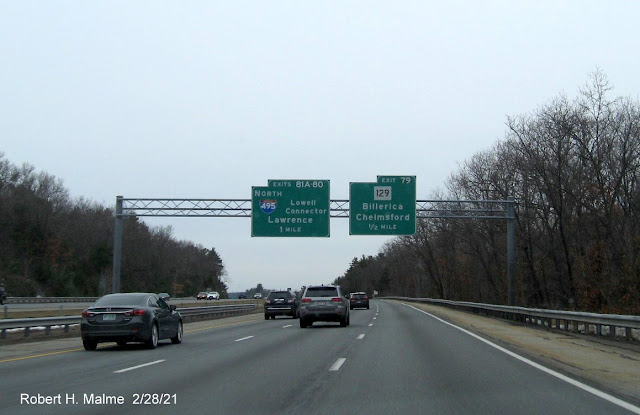 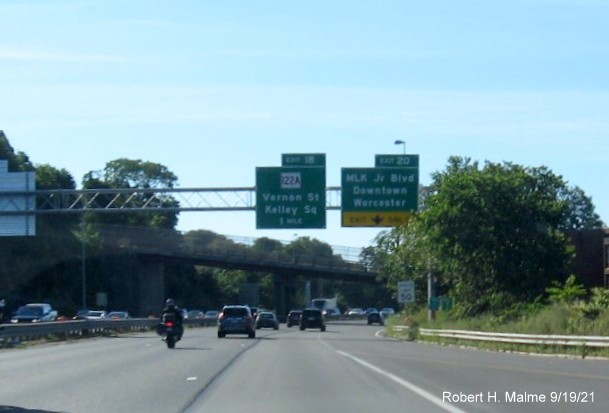 On I-290 West in Worcester are two errors, only one to do with exit renumbering, the MA Route 122A sign on the left was renumbered to 18, but that's the exit number for the Route 122 exit, the correct number is 17. The distance listed on the sign of 1 Mile is actually the distance to the 122 exit, the Route 122A exit is half mile further west, as seen on below: 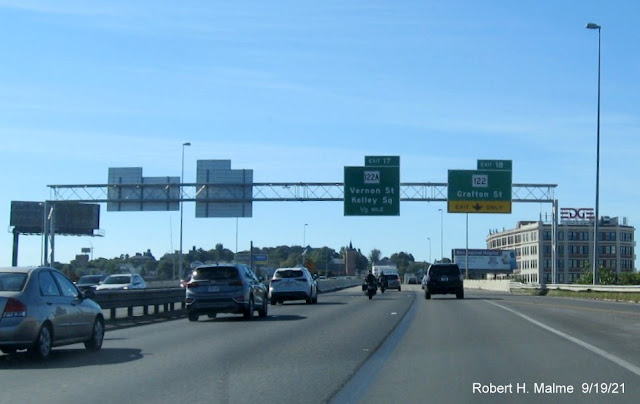 Most of the new numbers put up along I-290 are off center, as seen here. 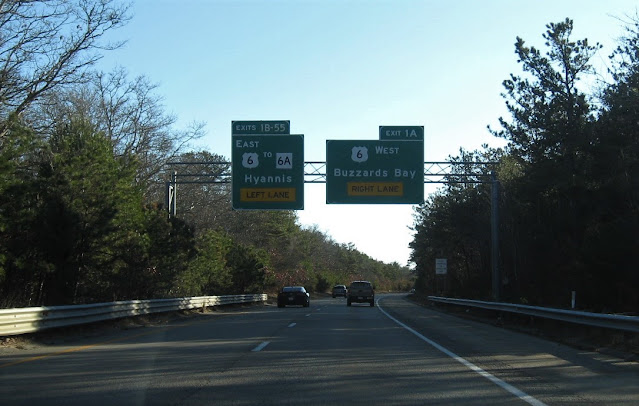 MassDOT decided not to change the US 6 exit numbers on the north side of the Sagamore Bridge for  the exits prior to where US 6 leaves, making them de facto MA 3 exits. However, for the advance sign  on MA 3 South for US 6 East they decided to replace Exit 1C for MA 6A with the new US 6 number      for that exit, 55. Since Route 3 ends at US 6, it would have been less confusing just to remove the  reference to the 6A exit at all and just list it Exit 1B.

Fun with Next Exit # Signs

The adoption of milepost exits would seem to end the usefulness of 'Next Exit #' or 'No Exit #' signs, however MassDOT apparently disagrees. 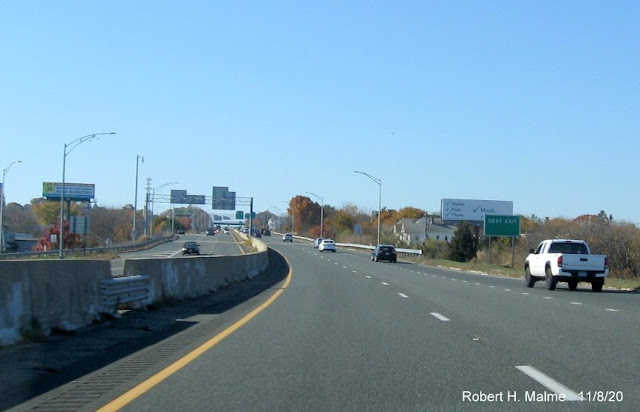 On I-195 East in New Bedford, contractor simply removed the number, not the sign. This was taken         down later. 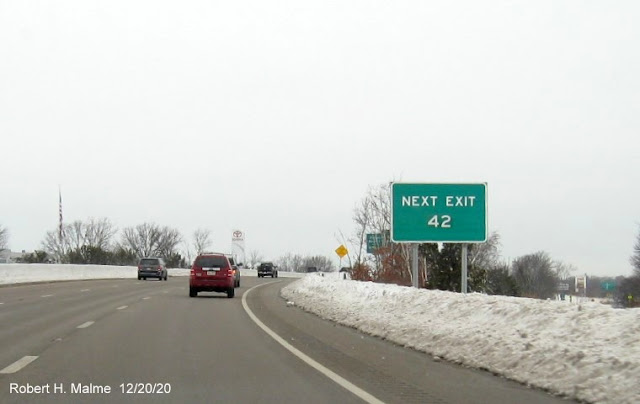 For this sign on MA Route 3 North in Braintree the number was changed to the next milepost exit.

Couldn't You Have Tried Harder?

I was extremely disappointed in one particular exit sign renumbering, since it didn't appear the contractors tried hard enough. The 1 mile advance sign for the US 44 West exit was replaced just prior to the Exit Renumbering Project as part of the installation of a permanent VMS. The exit tab was specifically designed to hold the future milepost based number. 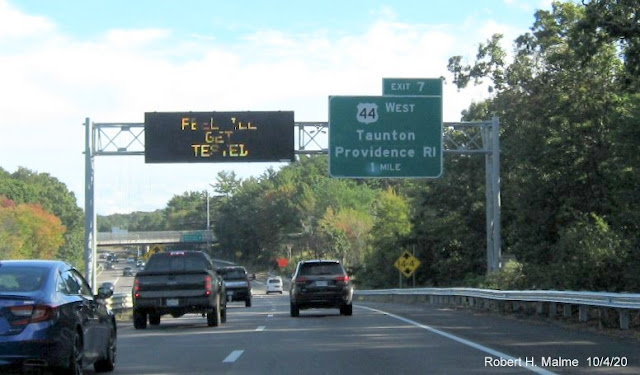 New 1 Mile advance for US 44 West shortly after being installed.
However, this is what was put up when the exit was renumbered. 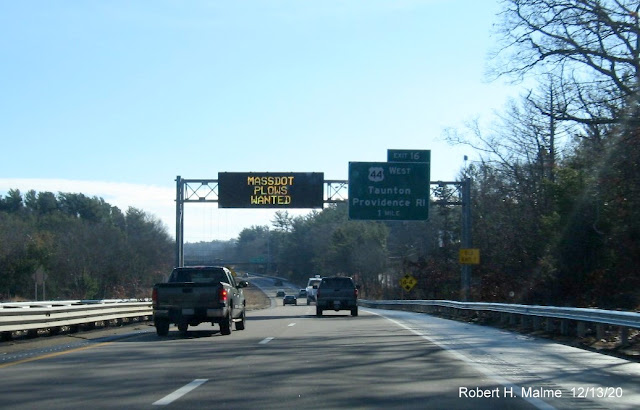 The exit number was placed way over on the left, would it have hurt to try a little harder to center it?

Thanks to Greg Goldman, Vinh Lam, Brian Noseworthy, and Paul Schlichtman for providing photos for roads I could not, or had not gotten to, check out the exit renumbering on.