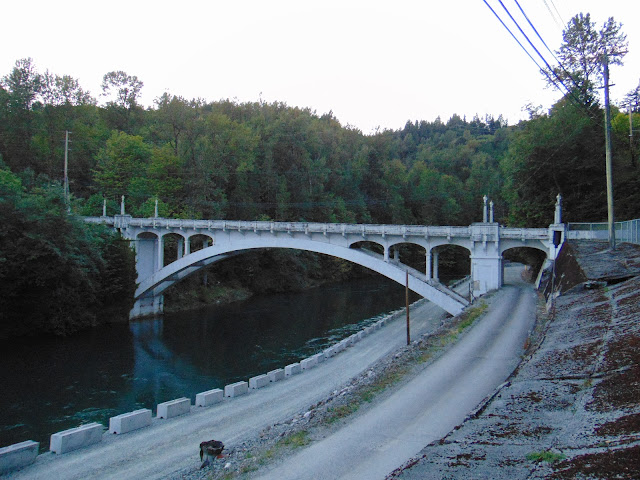 Nestled in the foothills of the northern Cascades of Skagit County is the small town of Concrete, Washington. Serviced by WA 20, the North Cascades Highway runs through this curiously named town that boasts a lot of history. But downtown Concrete with all of its concrete buildings (a series of fires burned down the wooden buildings that were once in town) is now bypassed by the modern alignment of WA 20. In order to lure passing motorists to stop through the town rather than bypass the town on the modern highway, the City of Concrete created the Concrete Historic Byway, which includes highlights from the old road. By taking the historic route, it will be evident on how much the cement industry played a role in Concrete throughout the decades.
If you are driving from the west on WA 20, one of the first things that you'll see upon entering Concrete is this Portland Superior Cement silo. This notable cement silo is on a plot of land now known as Silo Park. This was the site of Concrete’s second cement plant, completed in 1908, and later operated by Lone Star Northwest until 1967. Remaining structures include the silos, office building, power generator building, and safety sculpture. The words "Welcome to Concrete" is a more recent addition to the structure, as it was painted on for the filming of "This Boy's Life", the 1993 movie that was based on a book also titled "This Boy's Life" that was written by author Tobias Wolff, who once attended school in Concrete. 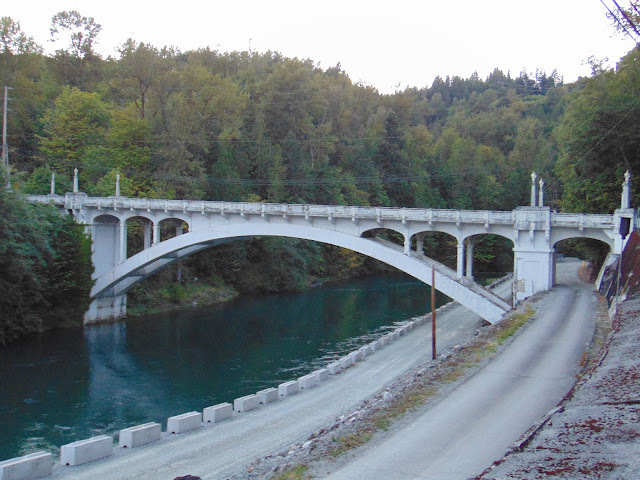 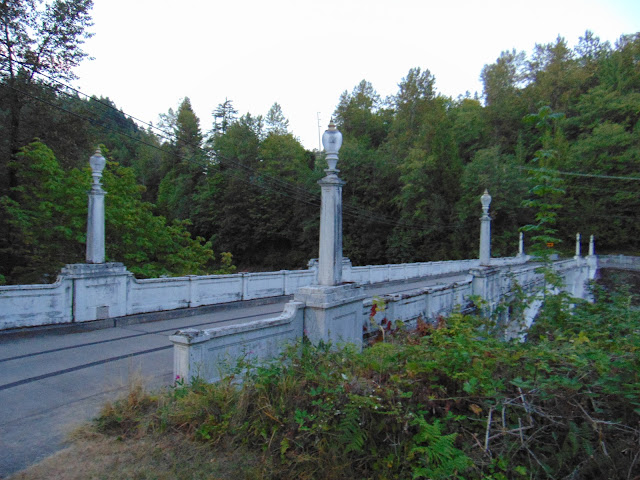 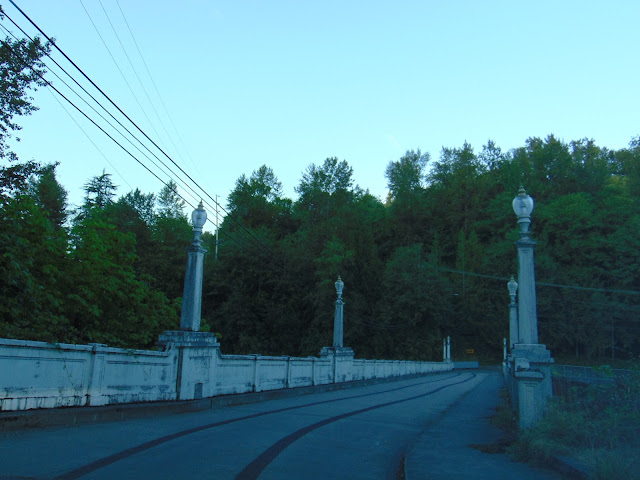 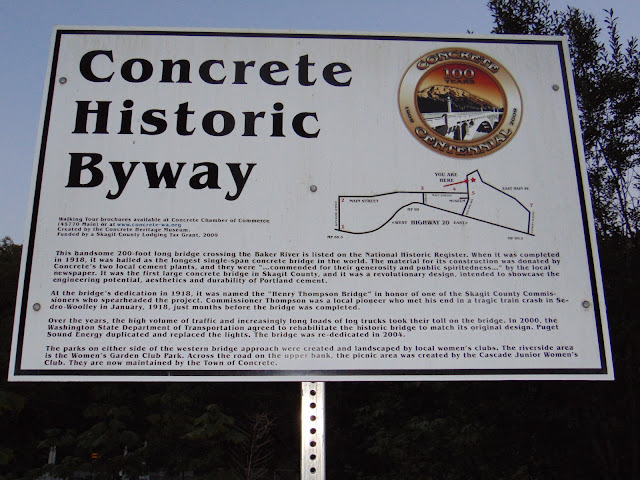 The Henry Thompson Bridge is a 200 foot long bridge crossing the Baker River in Concrete and is listed on the National Historic Register. When it was completed in 1918, it was hailed as the longest single-span concrete bridge in the world. The material for the bridge's construction was donated by the two cement plants in town. The Henry Thompson Bridge was the first large concrete bridge built in Skagit County and it was designed to showcase both the aesthetics and durability of Portland cement.

At the time of construction, there was no dam on the Baker River where Lake Shannon and Baker Lake are today, so  its free flow carried large amounts of debris and logs during high water from logging camps up the river to the Baker River Lumber Company. There was a steel wagon bridge had previously crossed the river at a lower level, but was not durable enough and had been condemned by the county engineer. This new bridge was located upstream at a narrower spot in the canyon high above the river, anchored in bedrock, and designed to span the gorge in a single arch. J.R. Wood of Seattle contracted the design in 1916 for a bid of $21,740. Construction took longer than expected due to the complex engineering. At the dedication in 1918, it was named the “Henry Thompson Bridge” in honor of one of the Skagit County Commissioners responsible for the project, who died in a tragic train crash in Sedro-Woolley, Washington in January, 1918, just before the bridge was completed.

Initially, WA 20 followed the route of Main Street through Concrete’s business district and across the Henry Thompson Bridge as it headed east. Over the years, as the growing volume of traffic and increasingly heavy and long loads of log trucks took their toll on the bridge. Heavy vehicles left holes in the bridge deck, causing the reinforcing metal to deteriorate. In 2000 the Washington State Department of Transportation agreed to replace the upper bridge structure, and rehabilitate the historic bridge to its original design, at a cost of $1.2 million dollars.
The Concrete Historic Byway then runs east through the historic Cement City neighborhood, one of the two towns that merged into what we know today as Concrete. At the east end of the neighborhood, the byway rejoins modern WA 20 and heads off to the North Cascades National Park and across Washington State.
How to Get There:
Sources and Links:
Waymarking.com - Concrete Historic Byway
The Historical Marker Database - Concrete Historic Byway
Concrete Heritage Museum - Historic Walking Tour (PDF)