By Adam June 15, 2017
From Searights Toll House, the National Road continues west towards the Monongahela River town of Brownsville.  Brownsville for many decades was a transportation and industry center.  Brownsville was the home to steamboat construction and a rail hub for the steel industry.  Like many cities and town's in what is now known as the Rust Belt, Brownsville saw a steady and dramatic population decline after the Second World War.  Brownsville's population peaked at just over 8,000 residents in 1940 to nearly a quarter of that today.  (The estimated 2016 population is 2,270.)

The heart of Downtown Brownsville is known as "The Neck", and for years this flat stretch of land between the Intercounty and Lane Bane Bridges along Market Street was home to many professional businesses, banks, stores and shops, and more.  However, "The Neck" today is a skeleton of what it once was.  Many of the historic buildings with intricate architectural detail are boarded up and have been empty for many years.  Over the years, many proposals have come and gone to revitalize the city.  From riverboat gambling to pushing for the completion of the Mon-Fayette Expressway, Brownsville's residents and leaders hope to return the city to its former glory. 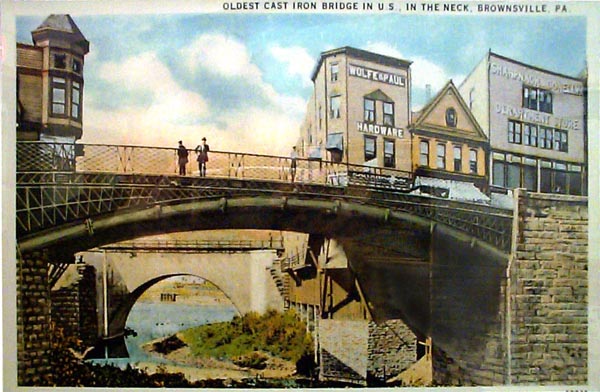 At the bottom of "The Neck" sits, the first and oldest cast iron bridge built in the United States.  Dedicated on July 4, 1839, this 80 foot bridge over Dunlap's Creek was built and designed by Captain Richard Delafield of the US Army Corps of Engineers.  Built by the US Government to stabilize the crossing that had seen three bridges destroyed since 1801, the bridge's cost was $39,811.63. (1)  This was one of the last major projects undertaken by the federal government before turning over control of the National Road to the states.  The bridge consists of "five parallel arches, each consisting of nine segments." (1)  Later as the canal and then the rail eras began to shape the nation, the bridge would sit virtually unused to heavy traffic until the automobile age.

Over the bridge's nearly 200 year old history, there have been many changes within Brownsville and the structures in its immediate vicinity.  As Brownsville grew with the spread of the coal and steel industries, many structures were built over Dunlap's Creek and were tied into the bridge.  This would make the bridge appear much shorter in length than it actually is.   In addition, the Dunlap's Creek Bridge has received numerous recognition and awards.  Beginning with its dedication as a National Historic Landmark in 1920, this old bridge has accumulated five historical and engineering awards.  Plaques have been placed on the very detailed railings touting the structure's accomplishments.