The story on how the unbuilt US 40 Expressway in Brownsville took 40 years to complete.

By Adam June 11, 2017
For nearly four decades, the four lane US 40 just east of Brownsville came to an abrupt end - shown in the photo above - at Grindstone Road in Redstone Township.   In the late 1960s, what was then the Pennsylvania Division of Highways (PennDOH) extended a new four lane alignment of US 40 eastwards from Broadway Street slightly over one mile to Grindstone Road where an incomplete diamond interchange was built.  Earlier in the decade, PennDOH had built a four lane US 40 in Washington County into Brownsville complete with a new crossing over the Monongahela River known as the Lane Bane Bridge.  This new highway and bridge allowed US 40 to bypass the older Intercounty Bridge and downtown Brownsville.

After this new highway opened, nothing would happen to it for nearly forty years.  US 40 traffic would use the ramps for this planned diamond interchange and then jog on Grindstone Road briefly before continuing towards Uniontown on the original National Road. 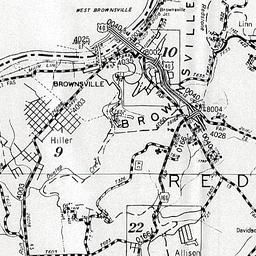 What was unknown (at least to me) is that what was supposed to have continued southeast or east from Grindstone Road.  Was it a separate US 40 that would have continued towards Uniontown? Or part of the original Mon Valley Expressway?  Or something else? Official PennDot maps of Fayette County (above at right) would never show any proposed or planned route beyond the interchange.

Fortunately since this article was originally written in June 2017, new information has come into light.  From a blog comment below - the highway was to continue southeast paralleling US 40 to the US 119 bypass of Uniontown.  Plans to extend the four lane US 40 to Uniontown existed to at least 1975; however, it appears that any further extension of the road would fall victim of PennDOT's troubled financial problems of the 1970s.  What is still unknown is what was the planned alignment of the road - would it be a full limited access highway or include driveways and intersections.  Where it would have tied into the US 119 freeway is also unknown. Finally, does the current PA Turnpike 43 follow any of the proposed highway's path.

Regardless, nothing would happen here until the later half of the 2000s.  It was then, that this old unused piece of expressway would be converted to a two lane at-grade roadway connecting US 40 and Brownsville to the Mon-Fayette Expressway.

Personally, I first came across this stub end in the early 1990s when going to watch my high school football team play Brownsville Area High School.  We came upon it via Grindstone Road.  Grindstone Road would briefly turn into a four lane boulevard type road and crossover the never completed highway.  During the 1990s, I would drive out to explore this area to search for any clues on what was never built here.  I've included some photos of how it looked in 2002 when a number of us toured this oddity.

Not long after those photos were taken, the Pennsylvania Turnpike Commission would begin construction to finally extend this route southeastwards towards Uniontown.  Known as the Redstone Connector, the roadway was built as a two lane highway that is served to connect US 40 and Brownsville to the Mon-Fayette Expressway.  The highway, though built as two lanes with a center turning lane, can be expanded to a four lane road keeping the center turn lane if traffic volumes and development warrant.  The diamond interchange with Grindstone Road would not survive the construction.  It was eliminated and changed to a normal signalized intersection.  A return visit in December 2006 showed construction well underway on the Redstone Connector and the new roadway would open one year later in December 2007.


The eventual construction of Redstone Way is a rare case in Western Pennsylvania and actually throughout Pennsylvania of long shelved highway plans coming to life and completion.  Although it is unknown what the original plan for US 40 east of Brownsville was, the stub ends of a highway that would go nowhere for nearly forty years found a new purpose and an ultimate destination.  If you have any background information on what any of the proposed plans for US 40 in Brownsville were to be, please shoot me an email or leave a comment.

FiliumBonus said…
According to the 25 Mar 1975 The Evening Standard (Uniontown PA):

Proposed construction of a four-lane roadway (Route 40) from the Grindstone Rd. to Uniontown has been held up due to an Environmental Impact Statement and changes necessitated by the Brier Hill "new town" project falling through. A public hearing should be held within the next two months but construction is at least three years away. The project includes a 6.9-mile section from the interchange at the Grindstone Rd. to Rocks Works at a cost of $14 million and another section from Rocks Works to the Uniontown by-pass, four miles at an estimated cost of $15 million.

That is the last reference to this project that I can find in local papers.
2:53 AM

Adam said…
Thank you so much for the additional information!
9:10 PM

Ken Harasty said…
The contractor on the 1968 section from Brownsville's Northside to Grindstone Rd. was the Frank Bozzo Construction Co. of Bridgeville, PA. I worked for them, but not at this job site. My dad and brother worked at the Brownsville location.
12:20 PM