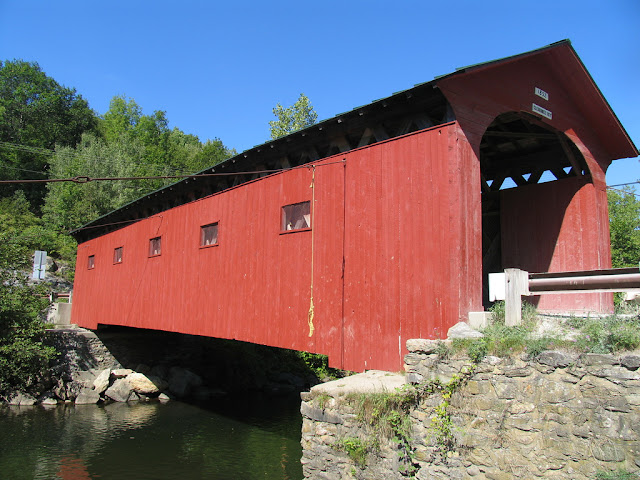 The Arlington Green Covered Bridge in Arlington, Vermont is a rather simple bridge and for the most part is the typical red covered bridge you'd find in New England or anywhere else.  However, if you turn off VT 313 and cross over the Batten Kill River through the bridge there's a little more interest.  The Inn on Covered Bridge Green sits just beyond the Arlington Green Bridge.  This historic structure was built in 1792 and was one the home of Norman Rockwell from 1943-1954.  It is now a Bed & Breakfast.

The Arlington Green Bridge - which also is known as the Bridge at The Green - crosses the Batten Kill River.  The Town Lattice design bridge was built in 1852.  The bridge is 80 feet in length.  The bridge was heavily damaged during flooding from the remnants of Hurricane Irene in 2011.  It was repaired and re-opened a few months later.

The bridge, despite the sign in the photo below, is a popular swimming spot and the stone abutments are often used for jumping into the river below. It is also a popular kayak launch and fishing spot. The bridge, due to its easy access, is one of the most popular covered bridges in Vermont and is often photographed.