By Doug April 20, 2008
On Saturday, April 19, 2008, I took a once in a lifetime opportunity to see His Holiness.  As a result, this crossed off another thing on my to-do list of life, which is to see a world leader in person.

Pope Benedict XVI was visiting New York City, his first time in the United States as the Pope, and part of his itinerary was to have a motorcade and escorted procession down Fifth Avenue in midtown Manhattan.  This was the rare opportunity that most average people would have to see the Pope while he was in town.

On a whim, I decided to make the trip down from Albany by car and train to take part as a spectator to this procession.  It was very much like the atmosphere leading up to a rock concert and there was very little protest at all.  There was chanting, music and signing.  There were a good number of Catholics who had traveled from far away to see the Pope, as well as curiosity seekers such as myself.

As the Popemobile came closer, there was a sense of excitement in the air and it was hard not to get caught up in the moment.  As the Popemobile passed by, with the Pope inside, cameras everywhere were taking pictures.  And then, it was all over.  Some people chased after the Pope, but most people went along their merry way, to continue enjoying what was a spectacular day outside in New York City.

Curious to see how the Popemobile is shipped when the Pope visits different countries?  Click on this link.  Also, here are a few photos of my experience. 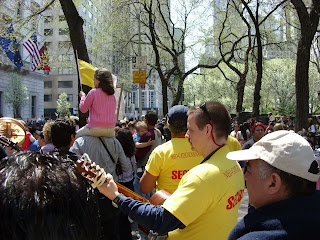 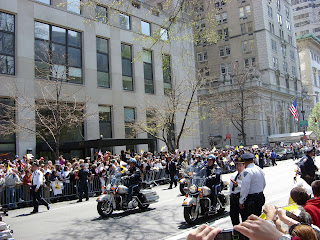 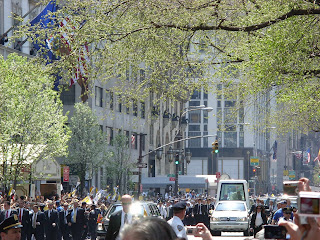 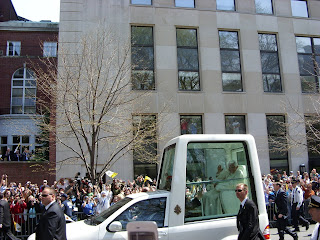 Anonymous said…
Congrats on reaching one of your goals. I was standing next to Billy when you called and later texted him.

I got to see Bush 43 in London, Ky. in 2003. I still have the ticket stub from the event, and I have several photos as well. I was sitting far away but still got some decent ones.

A friend of mine actually got to shake his hand.
9:03 PM

Laura said…
Those are great pictures! What an awesome experience!
11:02 PM