By Adam April 26, 2008
Now that everyone has calmed down at the sight of seeing I-73 signed on the recently opened segments of the Greensboro Outer Loop, it's time to get you all excited again!

Yep, you guessed it. More I-73 Photos! A few weeks ago Bob Malme sent me three shots showing other ways I-73 is signed on the freeways and surface streets that interchange with I-40/73. 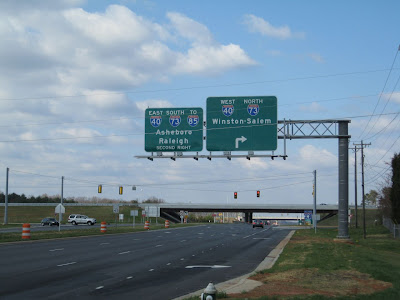 Here Bob is on Wendover Ave. and I-73 is marked on the overhead signs. It will be interesting to see what will be listed under Winston-Salem as the Greensboro Loop and I-73 is built. Martinsville, maybe? 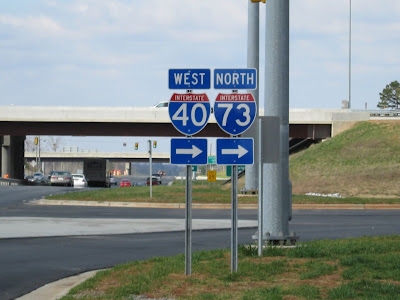 Now some have stated that I-40/73/85 form one of the few triplex Interstate segments in the country. And hell, the state even signs it that way. 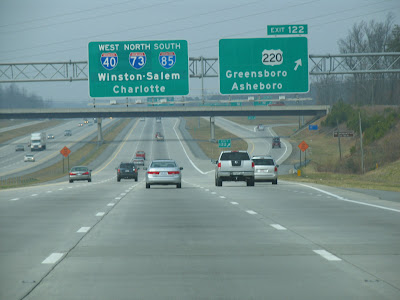 Well upon closer inspection, that may not be the case. You see, I-85 South physically leaves the Greensboro Loop before I-73 North joins it. (Now for about a 1/2 mile or so I-73 North runs parallel to the loop via the ramp that begins at right in the photo above.) I-73 South leaves I-40 East before I-85 North Joins the loop. (Again same scenario with parallel ramps). 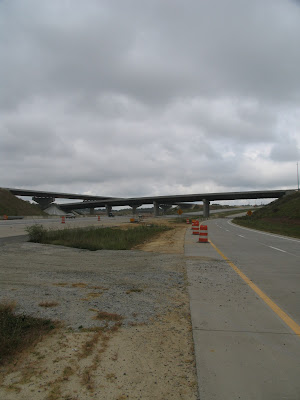 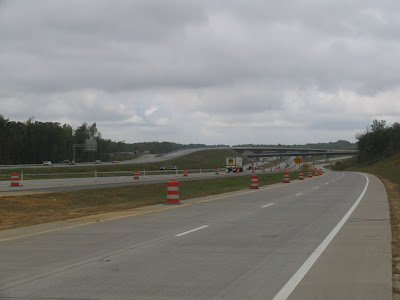 Now the two photos above are from last October when the new section was still under construction. To the right is the two lane ramp that carries I-73 North from US 220 (along with access to Grandover Parkway) In the middle I-40 West will bear to the right while I-85 South heads left and off the loop to head south to Charlotte, Atlanta, and whatnot. SO I-73 North is not on the main traffic lanes of the loop when I-85 South exits off. (Now you see why I call it 'The Maze'?) 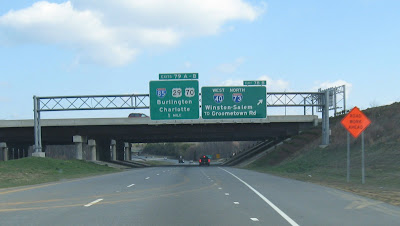 Then there is the above sign on US 220 (Future I-73 North) as it approaches the loop. There is no access to I-85 South from I-73 North. Those wanting to get on I-85 South and head to Charlotte need to go a mile further north to where US 220 meets what is now Business I-85.

Confused yet? I am sure you are. Fortunately, this 'Maze' of connections are all within a mile of each other, and someway somehow you can get there from here. But it appears that the I-40/73/85 multiplex doesn't 'technically' exist.

Anonymous said…
I've also questioned whether it exists, because Future Interstate 73 shields were posted on the U.S. 220 freeway leaving south of now Business Loop Interstate 40 & U.S. 421. Have those been removed, or is the triplex signing a stop-gap until that section of freeway is brought up to standards?
11:28 AM

From my understanding I-73 will be on the loop from Bryan Boulevard to US 220. There has never been an official announcement, but a number of NCDOT maps show the change in the corridor to the current routing around Greensboro.

The shields were up prior to the bypass opening; however, I am not aware of their status since the 40 bypass opened. If they are still up, it's more than likely that NCDOT has not gotten to them yet.

I am in Charlotte this weekend, so on my way back to Raleigh - I'll try to see if the shields in fact have been taken down.
4:22 PM