By Bob Malme January 02, 2017
While the year ended up on a disappointing note with the news that the plan to open a new segment of I-73 north of Greensboro by the end of 2016, promised by NCDOT last spring, had been postponed, work continued quietly on all existing projects with the promise of further funding for additional work in the soon to be published NC State Transportation Improvement Plan (STIP) for 2018-2027.

NCDOT announced last spring that it planned to open the new I-73 route from PTI Airport to US 220 near the Haw River by the end of the year. In the summer it was learned there were going to be delays in opening the segment from Bryan Blvd. to NC 68, but the section between NC 68 and US 220 would open in November. Alas, in early December word came that the entire segment would not open until spring, probably May. Work on this segment, as of mid-December is 92% complete and there are segments which appear to be close to completion, as this photo from AA Forum member Strider shows: 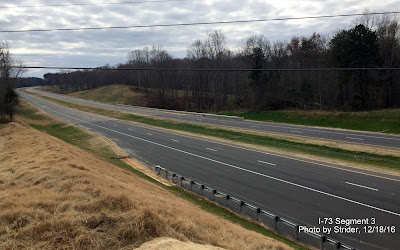 However, there are other areas where paving has not quite started yet: 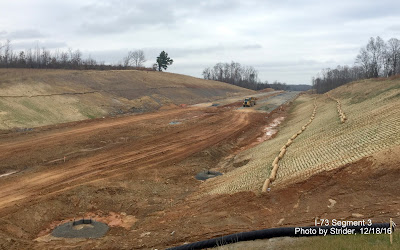 Work near the PTI Airport has recently picked up, so there's optimism the spring completion date will be met. Here's the closest view of the PTI Taxiway bridge now complete over the Future I-73 lanes as seen from Bryan Blvd: 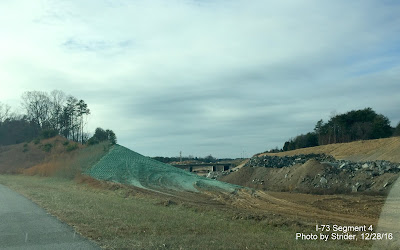 Work is also continuing at the other end with bridge being constructed for Future I-73 over NC 68: 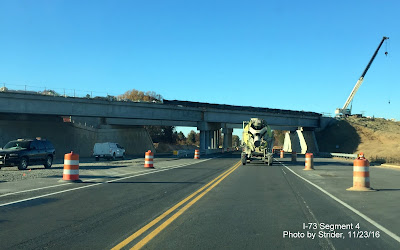 Further north, the work on the segment along US 220 north to NC 68 has also progressed over the past year with the project now 72% complete, as opposed to almost 60% before. However, this segment is behind schedule with an opening date now listed as early 2018. Again, there are sections, such as at the Future I-73/US 220 interchange where work is almost complete: 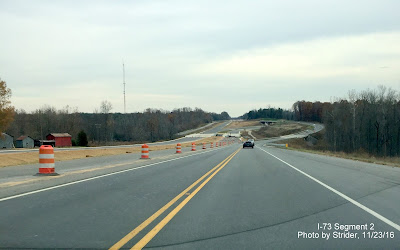 And other areas where grading has just started, such as the future I-73 South lanes just south of the northern end of the project at NC 68: 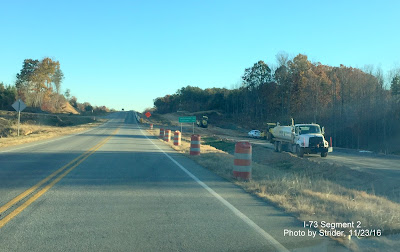 Meanwhile, further south in Richmond County, significant progress has been made in upgrading US 220 to interstate standards as part of the I-73/I-74 Rockingham Bypass project. The work is, as of November, now over 60% complete, as compared to 34% a year ago. The project is still behind schedule though and the completion date was pushed back a month to April 2018. Most of the work has been building the service roads paralleling the existing roadway with traffic moved onto them so that the existing US 220 lanes can be improved, as seen in this photo by J. Austin Carter: 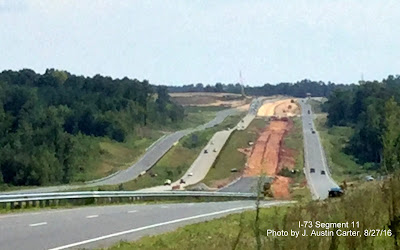 Traffic had been moved off the northbound lanes to the service road on the left in the photo above in December. Work also has been started at building the new interchange with Haywood Cemetery Road, here's the supports for the interchange overpass being constructed, also taken by J. Austin Carter: 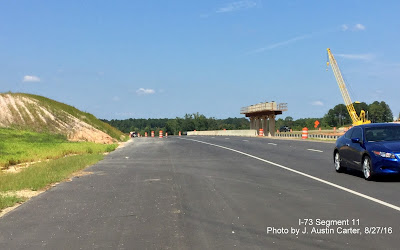 As for the remainder of the Bypass, the good news is that that project is no longer on hold. It was added to the 2016-2025 STIP in February with construction scheduled to take place between 2022 and 2025. The prospects for completing I-73 in NC still rest with neighboring states with NCDOT not committed to building the northern and southern most segments without commitments by VA and SC to build their proposed routes.

While no new segment of I-74 started construction in 2016, there was positive news about the expansion of existing projects and new funding for others. Besides work on the Rockingham Bypass with I-73, work continued on the first segment of the Winston-Salem Northern Beltway between Business 40/US 421 and US 158. Progress is still slow, however, with the completion percentage in the past year only going from about 15% to just over 28% by year's end. The NCDOT Project page says the project should be 50.7% complete. Still work could be seen in clearing the path for the future road as seen in these photos from J. Austin Carter, both near Business 40: 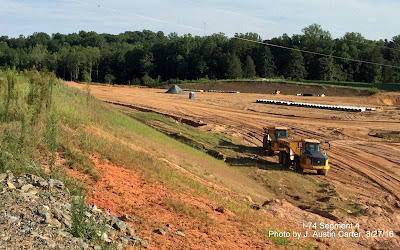 And farther north at the project's northern end near US 158: 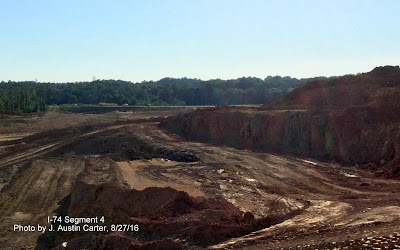 NCDOT announced that under a change in the state's transportation budget formula, all the remaining Eastern segments of the Beltway, and one segment of the Western Section would be funded under the new STIP with work to be completed by 2024. The STIP also includes funding for bringing US 74 up to interstate standards between Rockingham and Laurinburg. Work is to start on the segment between the two bypasses first with work scheduled to start in 2022. Work to bring the Laurinburg and Maxton Bypasses up to interstates standards should start soon after, as early as 2025.

Work also continues east of I-95 on a piecemeal basis to bring US 74 up to interstate standards. Work was completed this year on an overpass taking US 74 Business traffic over US 74 near Whiteville. Now the US 74 highway is limited access from four miles before the interchange with US 76 and the speed limit has been increased to 70 MPH, this is also the case at the northern end with the 70 MPH speed limit in place over five miles from the official end of I-74 at NC 41. Work is planned at several more intersections to replace them with interchanges, including at NC 130 over the next 10 years. There has been no word, however, as to whether US 74/76 east of Whiteville will be upgraded to interstate standards. NCDOT has, however, revived engineering work on the proposed Carolina Bays Extension project to extend SC 31 to US 17 just over the SC border.

2017 promises some new miles for I-73, and perhaps a few more funded projects when the new 2018-2027 State TIP is announced in January. And there may always be surprises. As always, I will have the latest information on my I-73/I-74 pages which, as of January 1, 2017, are on an new site, MalmeRoads.net.

All the Segment pages can be reached at http://www.malmeroads.net/i7374nc/index.html