By Challenger Tom January 21, 2017
Back in January there was some clearings in the winter storms that had been hammering the state for what seemed like was a solid month.  I was on my way to Monterey for the weekend and decided to take a much different route than the conventional fare with Signed County Route G16.  I peeled off of US 101 north into Greenfield and met G16 at Elm Avenue. 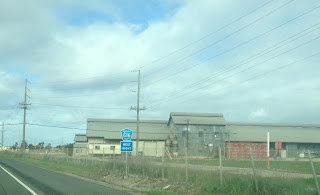 G16 is 56 mile east/west County Route entirely in Monterey County that was defined back in 1965.  G16s eastern terminus is about 3 miles east of Greenfield at County Route G15.  G16 travels west through the Santa Lucia Range meeting California State Route 1 in Carmel. 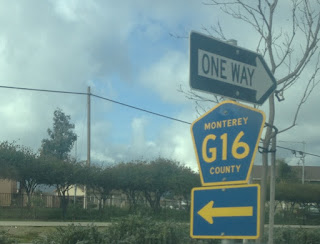 Leaving Greenfield westbound on G16 the city quickly ends and the speed limit picks up along Elm Avenue.  The Santa Lucia Range is very apparent leaving the city. 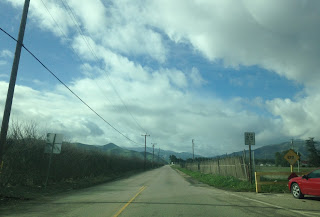 West of Greenfield Elm Avenue/G16 approaches the Arroyo Seco River and crosses it on the 1943 one-lane Arroyo Seco Bridge. 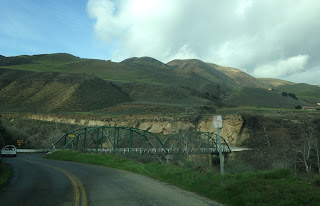 On the opposite bank of the Arroyo Seco River G16 meets County Route G17 at Arroyo Seco Road.  At the time I took these photos someone had swiped the G16 and G17 reassurance shields but they have since been replaced.  Monterey County tends to maintain signage on County Routes fairly well. 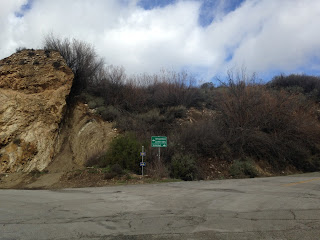 Looking west on Arroyo Seco Road/G16 there was a rare but obvious snow fall in the higher elevations of the Santa Lucia Range. 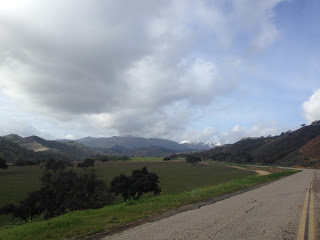 G16 cuts splits from Arroyo Seco Road and continues west on Carmel Valley Road.  Along Carmel Valley Road G16 switches from two-lane road and a wide single lane through much of Santa Lucia Range.  There was significant rock fall at lower elevations due to the recent storms but nothing impassable. 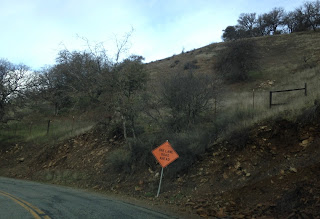 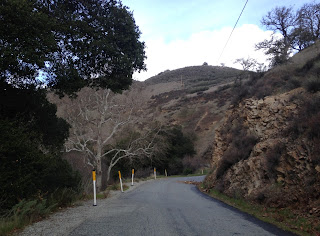 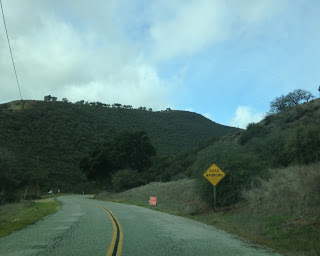 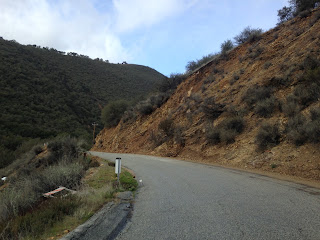 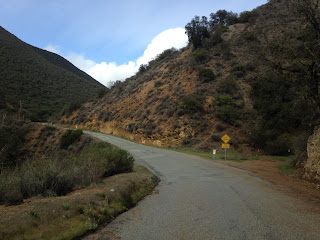 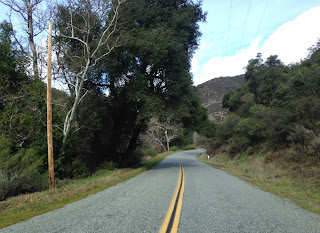 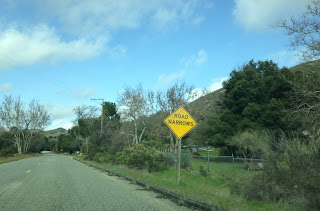 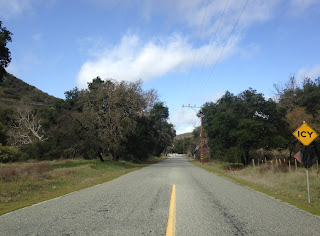 G16 begins to rise into the Santa Lucia Range along a wide single-lane grade.  I want to say the elevation topped at about 2,600 feet above sea level which is about as close as I wanted to get to the snow.  The roadway doesn't have any hairpins and is generally very easy to traverse normally with oncoming traffic at slower speeds. 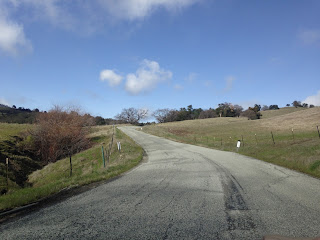 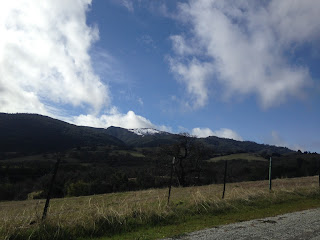 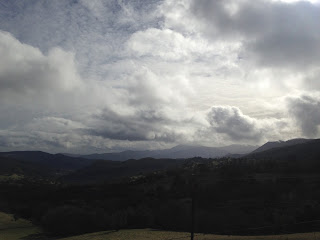 From the summit G16 dips down quickly in elevation and begins to follow Finch Creek. 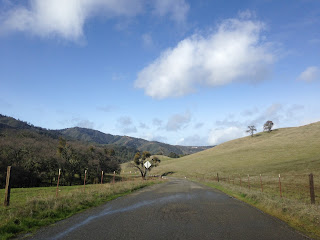 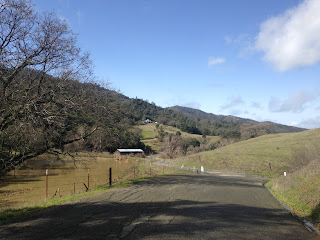 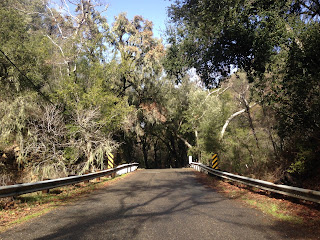 There was some slide damage along Finch Creek with some tree fall.  I'd really hate to be down in a ditch like this with the winter rains being heavy. 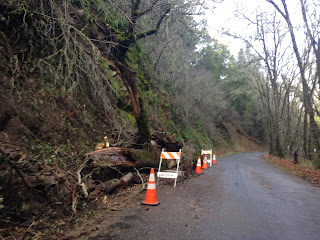 As G16 moves away from Finch Creek the terrain starts to open again, pretty soon the center stripe returns. 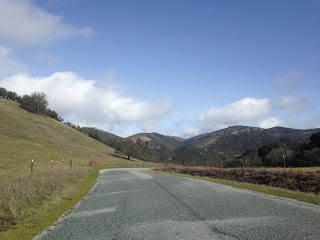 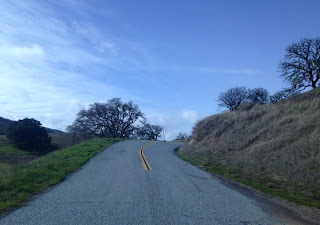 Only to disappear and reappear again approaching Tassajara Road. 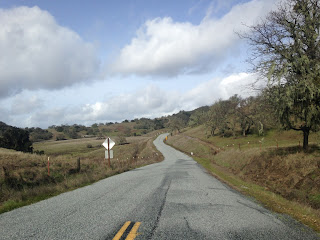 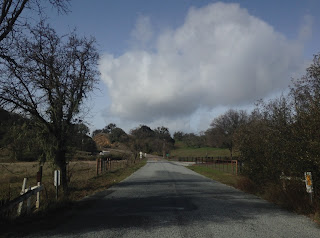 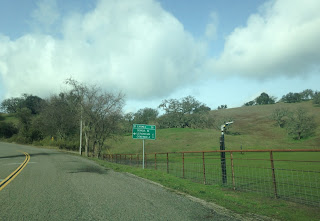 G16 follows Tularcitos Creek through one more one-lane section before meeting up with the Carmel River in Carmel Valley. 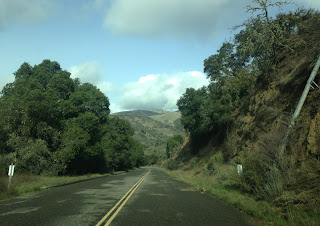 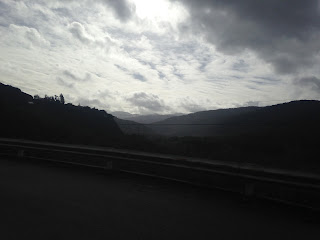 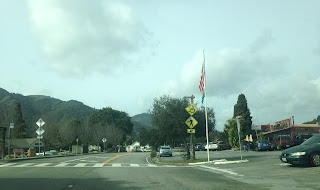 G16 junctions County Route G20/Laurles Grade in Carmel Valley.  G16 follows Carmel Valley Road alongside the Carmel River to a western terminus at CA 1.  Since I was heading to Monterey and I wasn't doing a route clinch I turned off of G16 onto G20 to reach CA 68. 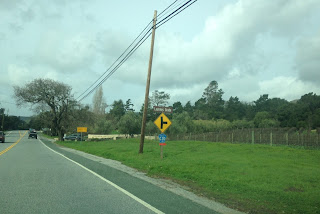