Getting to Know US 20's History 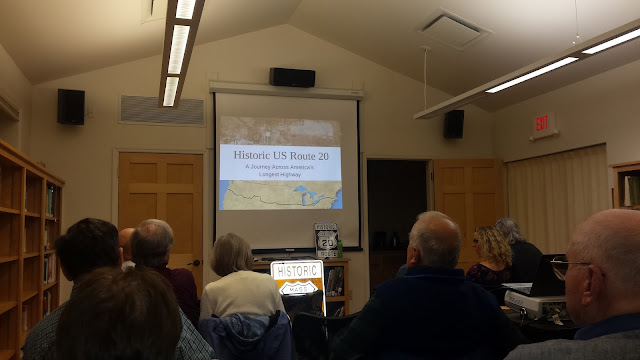 On the evening of Thursday, January 19, 2017, I had a chance to attend a presentation on the history of US Route 20 at the New Lebanon Library in New Lebanon, New York. New Lebanon is probably best known for being the birthplace of Samuel Tilden, who narrowly lost the 1876 U.S. Presidential Election, and one of the centers of the religious group known as the Shakers. But New Lebanon is also a town where the longest highway in the United States runs through. That highway is US Route 20.

The speaker of this presentation was Bryan Farr, who I first became acquainted with around the year 2002, as he contributed a wealth of photos and information to the former Gribblenation website. These days, he is the founder and president of the Historic US Route 20 Association, which aims to promote and link together individuals, communities and small businesses located along US 20.

During the presentation, not only was US 20 itself discussed, but also the history and the roads leading up to what is now a highway that stretches from Kenmore Square in Boston to the Oregon Coast in Newport through such places like Cleveland, Chicago and Yellowstone National Park. Famous people in history were discussed, such as General Henry Knox, who used what is now US 20 between current day Westfield, Massachusetts and Cambridge, Massachusetts to help change the course of history during the American Revolution. He talked about historic roads like the Greenwood Road, which used modern day US 20 from Pittsfield, Massachusetts to Albany, New York via New Lebanon, as well as the Cherry Valley Turnpike and the Great Genesee Road, which ushered travelers along US 20 in Upstate New York. Early auto trails such as the Yellowstone Trail was discussed, as it used US 20 as part of its routing. The topic of how US 20 got its number when the U.S. Highway System was being formed during the 1920 was also a topic of discussion.

Tie-ins to more focused topics like how US 20 was once routed through New Lebanon was another matter of discussion. This really engaged the audience of about thirty as they could see how US 20 affects more of their daily lives. For those who are familiar with New Lebanon, what is now US 20 passed by the Darrow School. There is even a part of the old road that you can explore by hiking. Some mention was also made about the stories and tales of the towns along US 20, such as the tale of the Esperance Witch. This was something new that I learned about. I've passed through Esperance, New York many times during my travels and while I knew about their locally famous cheese house (which, sadly, was destroyed by fire), this was the first I heard about the Esperance Witch. This goes to show that every road has its story.

In all, I thought it was a very informative and entertaining presentation. I even learned a few new things about US 20, even after traveling about half its length over the course of my travels. If you get a chance to attend a presentation on US 20, or any highway for that matter, it is definitely worth checking out.