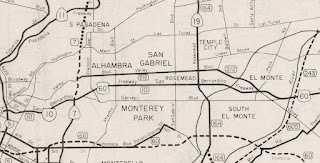 The history of California State Route 212

The origins of what would become California State Route 212 (CA 212) can be traced to the extension of US Route 60 into California.  As originally envisioned in the early drafts of US Route System what became US Route 66 in California was intended to be US Route 60. The designation of the Chicago-Los Angeles corridor was intended to carry a X0 route number given it was to denote a major east/west US Route. Ultimately the State of Kentucky petitioned to have a X0 US Route and the Chicago-Los Angeles corridor became US Route 66 in the finalized US Route System created by the American Association of State Highway Officials (AASHO) during November 1926.

US Route 60 (US 60) would rapidly be extended after the US Route System was created and would come into play in California during the early 1930s. A letter from the AASHO Executive Secretary to the California State Highway Engineer dated Marth 30th, 1931 noted that US 60 had been tentatively approved to be extended to California during the AASHO Executive Committee on May 26th, 1930. The approval of US 60 being extended to California carried the stipulation that the Colorado River Bridge in Blythe be purchased by the California Division of Highways and Arizona State Road Department. The letter noted California and Arizona had taken steps through their respective legislatures to purchase the Colorado River Bridge and the terminus of US 60 to be at an undisclosed location in Los Angeles. 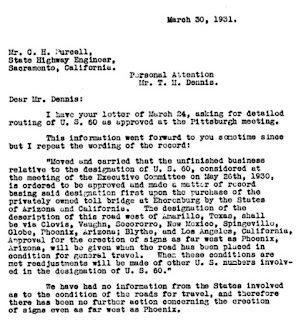 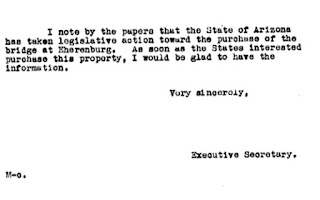 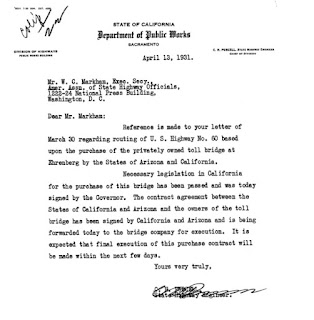 The California State Highway Engineer submitted a recommended routing of US 60 to the AASHO Executive Secretary on September 8th, 1931.  The route description of US 60 show as ending in Los Angeles by way of Pomona at an undisclosed terminus. 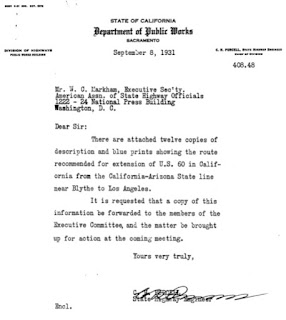 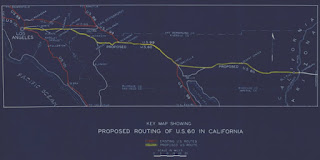 The AASHO Executive Secretary advised the California State Highway Engineer in a letter dated June 22nd, 1932, that the way points of US 60 in California were approved by the AASHO Executive Committee.  US 60 was to follow Legislative Route Number 26 (LRN 26) from Pomona to the Los Angeles city limit to an undisclosed terminus in the city.  LRN 26 had been extended by the State Legislature during 1931 from Colton to Los Angeles via Pomona.  Prior to 1933 the Division of Highways could not maintain highway mileage within incorporated cities. 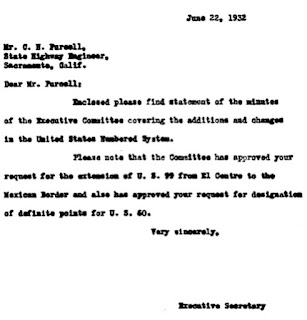 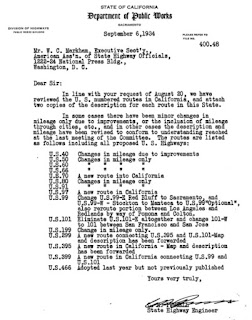 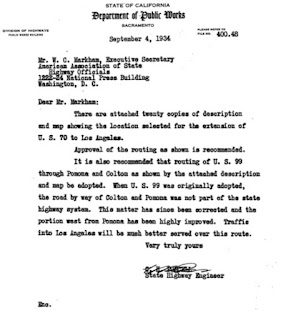 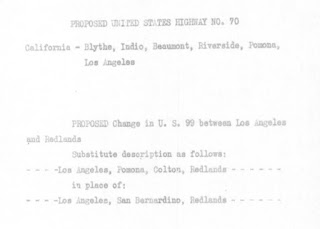 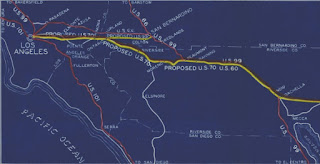 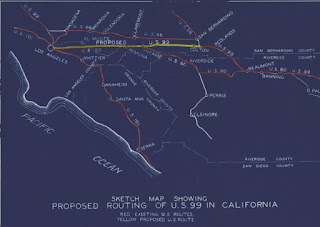 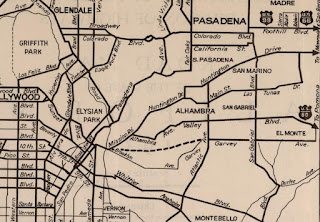 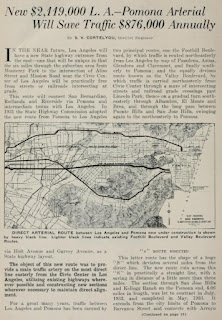 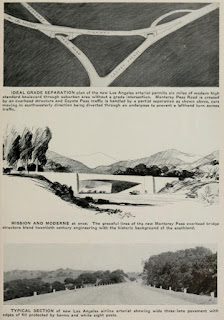 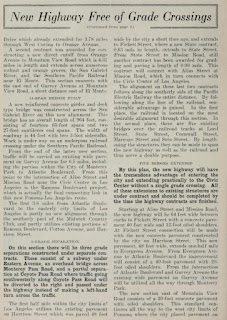 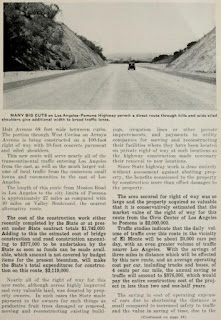 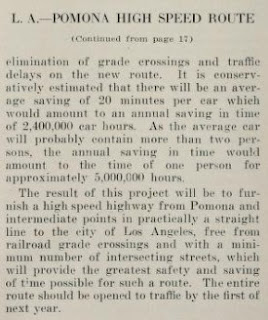 The 1935 Division of Highways Map of downtown Los Angeles shows US 99/US 60/US 70 (solid red line) following an interim alignment of LRN 26 east via Macy Street, Brooklyn Avenue and Mednik Avenue towards the completed segment of the Ramona Boulevard.  US 99/US 60/US 70 on LRN 26 are shown transitioning from the Ramona Expressway onto Garvey Avenue in Monterey Park.  Valley Boulevard is shown at this point to no longer be a State maintained roadway. 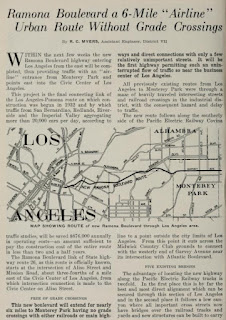 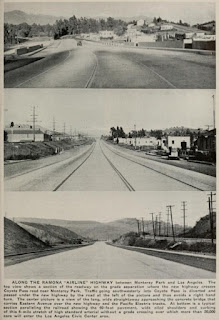 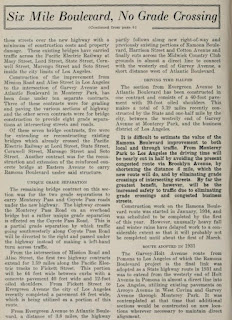 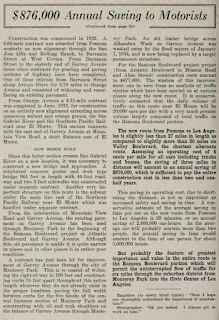 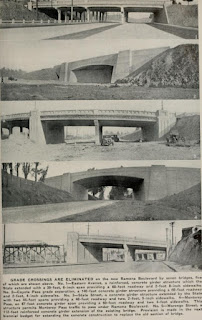 The June 1935 California Highways & Public Works announced the completion of Ramona Boulevard which served as the new alignment of US 99/US 60/US 70/LRN 26 from downtown Los Angeles to Monterey Park.  Ramona Boulevard along with improvements to Garvey Avenue are cited as having been dedicated May 25th, 1935. 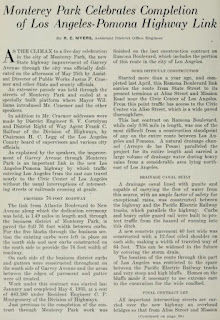 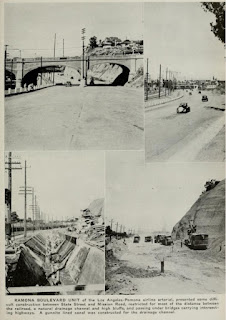 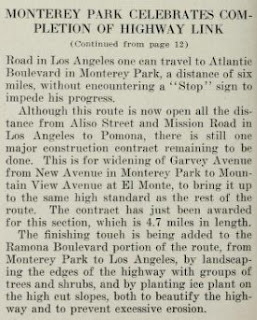 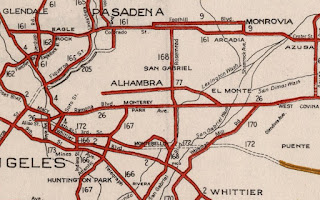 The new definition of segment (a) of LRN 77 appears on the 1954 Division of Highways Map.  Notably LRN 167 and the course of the planned Long Beach Freeway is displayed as connecting with the western terminus of LRN 77 segment (a) at the Los Angeles city limit.

As part of the 1964 State Highway Renumbering the Legislative Route Numbers were dropped in favor of field signage.  Subsequently all Legislative Route Numbers lacking a Sign State Route were assigned one.  LRN 77 segment (a) on Valley Boulevard was subsequently reassigned as CA 212.  CA 212 inherited the definition of LRN 77 segment (a) and first appears on the 1964 Division of Highways Map.

CA 7 and the Long Beach Freeway was completed to CA 212/Valley Boulevard by February 1965.  Despite the hanging western terminus of CA 212 being joined to another State Highway the route was deleted by 1965 Legislative Chapter 1372.  CA 212 subsequently no longer appears on 1966 Division of Highways Map.

Challenger Tom said…
Sherman Pass Road in Sequoia National Forest is what you’d be looking for then.
12:18 AM