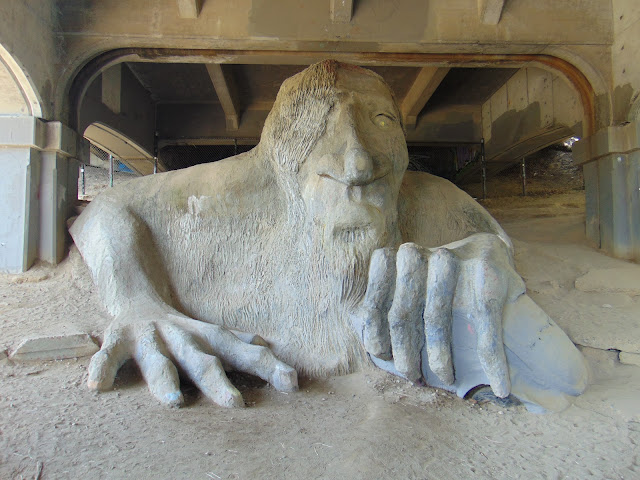 Eager to trade in shady activity for a new passion of city beautification, in 1989, the City of Seattle asked the Fremont Arts Council to launch an art competition to rehabilitate the area under the Aurora Bridge. The area under the bridge had become a local dumping ground as well as a haven for derelict activities such as drug dealing. Later that year, a team led by sculptor Steve Badanes (along with Will Martin, Ross Whitehead and Donna Walter) won the competition and was inspired by the folktale Billy Goat’s Gruff in designing a troll under the bridge. The troll sculpture is made from rebar steel, wire and 2 tons of messy ferroconcrete, is 18 foot tall with a shiny metal eye and crushing a car with his left hand. The Volkswagen Beetle crushed in the troll's left hand is a real car that contained the project’s time capsule that included Elvis memorabilia, until it was vandalized four months later. The car was then filled with concrete to counteract against any future vandalism to the sculpture.

Fremont residents were able to vote from numerous choices and wound up voting the troll, which also fits well within the Scandinavian heritage of the Seattle area. The sculpture's construction was funded by using the Seattle's Neighborhood Matching Fund. As one neighborhood activist said back in 1990, "Seattle could use a little sense of humor." The choice of the troll can be seen as serving as a metaphor for what that area has gone through over time. Legend has it that trolls live under bridges to escape traffic and development. Traffic and development are both issues that the Fremont neighborhood has had to face over the years.

The Fremont Troll has become an icon over the years since it has found a home under the bridge. Tourists flock to see the troll and to get pictures. In fact, the troll was quite busy with visitors the afternoon I visited. There is even a nearby troll park next to the bridge known as Troll's Knoll Forest. On October 31 of every year, you can celebrate Trolloween with the Fremont Troll. The troll has also made its way into popular culture. The troll has made appearances on the big screen in movies such as Sleepless in Seattle, the Twilight Saga, Death Note, 10 Things I Hate About You and is featured in music as well. In 2016 the Chicago rock band Majungas released a song called "The Fremont Troll" off their Seattle Rock album.

In all, the Fremont Troll may be the most popular thing about a bridge that's found under a bridge. You'll certainly miss it if you're driving on the Aurora Bridge itself, but sometimes it pays to see what lays underneath the bridge.