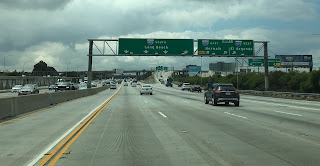 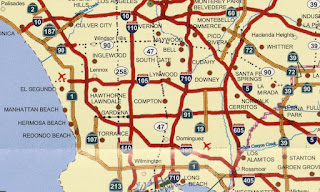 Part 1; the history of Interstate 105 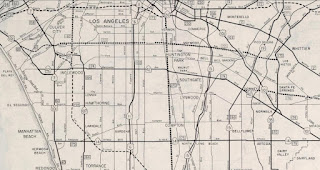 During the 1964 State Highway Renumbering all the Legislative Routes were dropped in favor of field signage.  CA 42 was extended east from Downey via the unbuilt portion of Legislative Route Number 176 which was known as the Yorba Linda Freeway.  CA 42 given a new Legislative Description as follows:
"Route 1 west of Inglewood to Route 91 in Santa Ana Canyon via the vicinity of Norwalk."
The planned alignment of CA 42 along with the new Legislative Description subsequently appear on the 1964 Division of Highways Map. 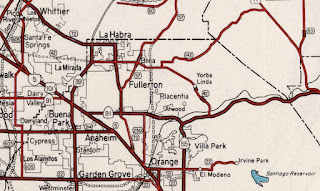 The Century Freeway alignment of CA 42 is first referenced in the March/April 1964 California Highways & Public Works.  The article stub notes that the Century Freeway was discussed via public hearing on June 5th, 1963.

The March/April 1964 California Highways & Public Works references the first segment of the Yorba Linda Freeway (CA 42) between Orangethorpe Avenue and Yorba Linda Avenue had opened to traffic during February of 1963. 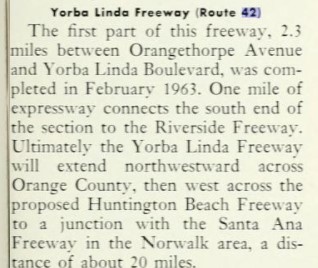 During 1965 the unbuilt portion of CA 42 from Interstate 605 to CA 39 was transferred to CA 90.  CA 42 was subsequently given a new Legislative Definition:
"(1) fromt Route 1 west of Inglewood to Route 605 and (2) Route 39 near La Habra to Route 91 in Santa Ana Canyon."
The gapped legislative definition of CA 42 first appears on the 1966 Division of Highways Map along with the planned alignment of the Century Freeway. 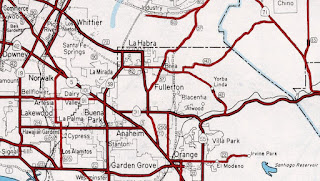 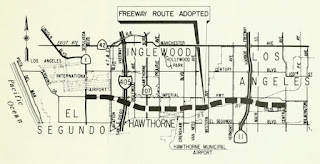 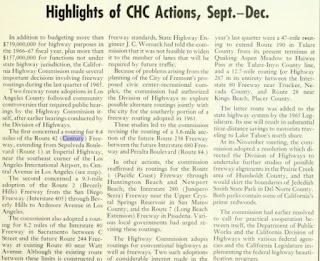 The adopted alignment of the Century Freeway/CA 42 from CA 1 to Central Avenue along with the planned continuation to CA 19 appears on the 1967 Division of Highways Map. 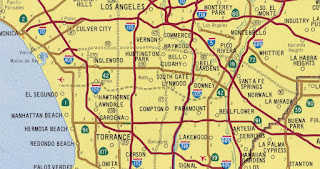 Interstate 105 is probably most well-known from the 1994 action movie Speed and the infamous bus jumping a freeway exit gap scene.

The thoughts of the Los Angeles Police Department in Speed regarding delays in the completion Interstate 105 can be seen below.

During May 2020 Interstate 105 was featured as part of the Roadwaywiz Los Angeles Webinar.  Interstate 105 is discussed by panelists Dan Murphy, Scott Onson and Steve Alps at 27:00-33:42.