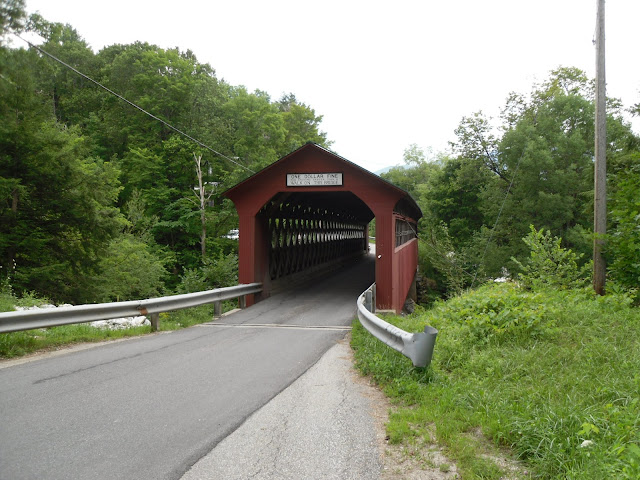 Also known as the East Arlington Covered Bridge due to its proximity to Vermont's original capital in Arlington, the Chiselville Covered Bridge was built in 1870 and spans over the Roaring Branch of the Batten Kill on Sunderland Hill Road in the Town of Sunderland, Vermont. The name of Chiselville comes from a chisel factory that was once situated in the small village that is also called Chiselville. The covered bridge was built by Daniel Oatman at a cost of $2,307.31 and he used a Town lattice truss design for the bridge's construction.

One thing that you'll notice about this 117 foot long covered bridge is that it sits very high above the river below. The bridge is about 40 feet above the Roaring Branch, lending to an alternative name as the High Bridge. This clearance above the river came in very useful during the devastating floods of November 1927, which caused much damage to covered bridges across Vermont. However, the Chiselville Covered Bridge stayed high and dry. But like many covered bridges, this bridge eventually faced some damage. In 1971, the bridge was severely damaged when two loaded gravel trucks tried to cross at the same time, causing the need for the bridge to be repaired. Supporting steel girders and a center pier were added in 1973 during the bridge's rehabilitation.

Fans of the 1987 movie "Baby Boom" may recall seeing the Chiselville Covered Bridge while watching the film. The bridge was featured in the scene when Diane Keaton’s character leaves New York to move to fictional Hadleyville, Vermont with her daughter for a more peaceful lifestyle. Today, all sorts of people can enjoy the Chiselville Covered Bridge, whether they are taking a motorcycle along scenic back roads or exploring the many covered bridges that Bennington County has to offer between and around its two shire towns.