By Challenger Tom February 02, 2019
This past week I found myself back on Fulton Street north of downtown Fresno in the Tower District.  I took the opportunity to get a couple photos of the 1939 Tower Theatre at night. 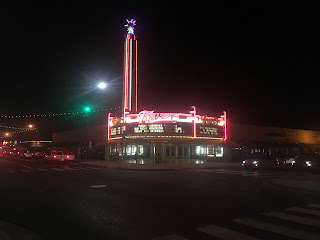 The Fresno Tower Theatre was one of many Fox Theatres which were built mostly in California and some major cities in other states mostly during the 1920s and 1930s.  Fox Theatres were known for their architectural style which drew various influences.  In fact Fox Theatres have been part of several of my blogs given that they are often located on classic highway alignments (Woodward Avenue in Detroit, Irwin Street in Hanford and Main Street in Visalia come to mind).   The Fresno Tower Theatre as stated above opened in 1939 and managed to stay continually operating until 1989 through various owners.

The Tower Theatre is generally considered to be the center of the Tower District of Fresno and the northern most attraction on Fulton Street.  The Tower Theatre reopened in 1990 after a restoration and added to the Register of Historic Places in 1992.

Fulton Street fully reopened to vehicle traffic to the south through downtown Fresno recently.  A blog feature just prior to the reopening of Fulton Street can be found here: