By Challenger Tom February 07, 2019
Recently I decided to re-visit the Van Ness Arch after seeing a Google image of it blocked off by Union Pacific construction.  The Van Ness Arch was located just off of US Route 99/Railroad Avenue at the rail crossing on Van Ness Avenue in southern Fresno. 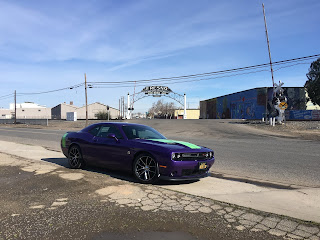 An archway at Railroad Avenue and Van Ness Avenue was first proposed by the City of Fresno along Legislative Route Number 4 (future US 99) first in 1915.  The original Van Ness Arch was completed in 1917 but only lasted to 1925 when it was damaged by fire.  The current Van Ness Arch dates back to 1929 and features an Arc Deco design.  The 1929 Van Ness Arch states the following greeting; "Fresno, the best little city in the USA, Van Ness Avenue." 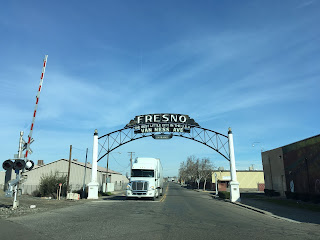 Despite the Van Ness Arch being completed only by 1929 the alignment of US 99 shifted to the west off of Railroad Avenue to a wider rail approach into downtown by 1930.  At some point between 1930 the route of Railroad Avenue to the Van Ness Arch may have been signed as a US 99 business route.  Previously I covered the surface route of US 99 in Fresno on the blog below:

The fate of the Van Ness Arch is uncertain as access to it will be eventually bisected by the High Speed Rail project.  Said project may also lead to the demolition of former US Route 99 on Railroad Avenue.  Back in 2013 the FresnoBee published a story regarding the history of the Van Ness Arch.