By Challenger Tom July 05, 2018
Back in 2012 I headed out to rural Pima County in the Silverbell Mountains looking for any trace of the Silverbell company town. 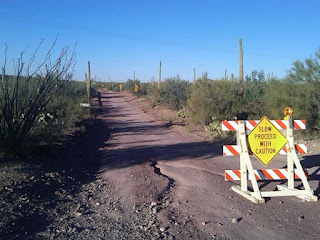 The trip to find Silverbell involved taking Avra Valley Road west from I-10 to the current open mining pit with has a junction with Silverbell Road. 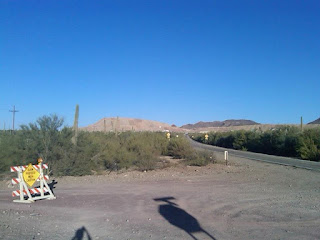 Silverbell Road is essentially a U-shaped roadway that traverses northwest from the Silver Bell Mine at Avra Valley before looping back eastward to Avra Valley via Ironwood National Monument where it ends at Trico Road.  Silverbell Road for the most part a somewhat decent dirt roadway with some small segments of asphalt.  I wouldn't recommend taking a car out to Silverbell Road but at the time I went it definitely could be accessed with just a normal 2WD high clearance vehicle.

At the time I didn't realize there was active drug running going on in the Silverbell Mountains.  I ran across several Border Patrol trucks who were searching the desert for anyone who may on foot heading northward from Sonora.  It was definitely odd to see Border Patrol vehicles patrolling a road that was so far north from the actual border but there was definitely an opportunity to pass through almost open desert to the south for anyone brave enough to try.

Silverbell is sometimes referred to "Silver Bell."  The Silverbell Mine despite it's name actually exploits a seam of copper.  The original Silverbell company town was located on the north end of the modern open pit mines.  Silverbell was established in 1903 when several small mining claims which dated back to the 1880s were consolidated by the Imperial Copper Company.

The original Silverbell apparently topped out at about 1,000 residents.  By the early 1930 Copper production in the Silverbell shuttered and the town declined until Post Office Service was removed in 1934.  The Arizona Southern Railroad apparently was dismantled by 1933.

By 1954 the Asarco Mining company built a second company town known as Silver Bell which was located at the junction of Avra Valley Road and Silver Bell Road pictured above.  The Silver Bell company town was largely demolished by Asarco when copper prices declined in 1984.  The current mine owner purchased the property in 1989 and operates the open pit mines where both Silverbell/Silver Bell were located.

So was there anything left really merit of Silverbell or Silver Bell?  The simple answer is; no, there wasn't anything standing left that I could find.  The open pit mine largely wiped out any trace of either town, I suppose the story and a couple interesting roads made the trip worth it.