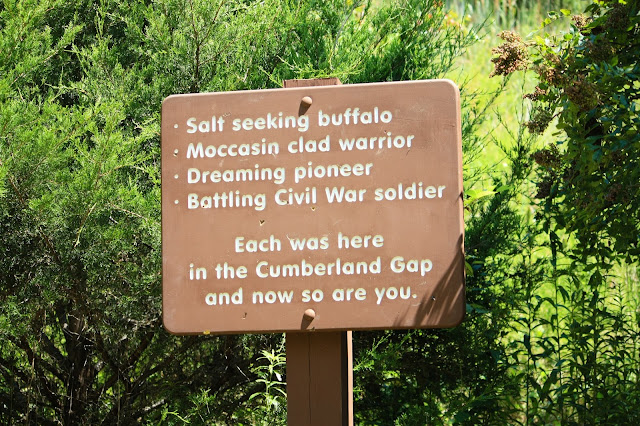 A few weeks ago, I took a roadtrip with Chris Allen to the Cumberland Gap.  This has long been on my list of one day roadgeeking trips and after a handful of times where plans had fallen through over the years.  I finally got to do the trip.  In addition, since Chris, myself, Brian all have kids now - random road trips aren't very common anymore.  However, once a year some combination of us try to make a long one day road trip.

We left Chris' house at just after 6 am. I don't get to the North Carolina High Country much anymore - let alone in the morning.  And I found that this photo of I-74 West approaching Interstate 77 west of Mount Airy as scenic but also makes me wish for more time to get back there. 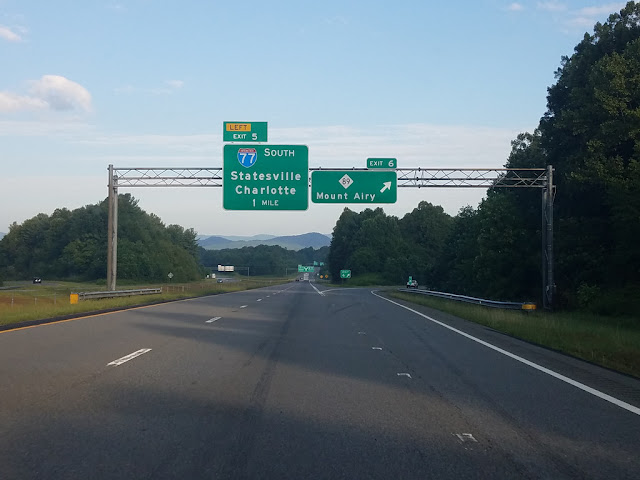 One of the nice things about the route of this trip is that we got to drive Interstate 81 south and west of Wytheville.  It really is a stretch of Interstate I don't travel much.  In fact the last time I was on 81 southwest of Wytheville was April of 2010.  It is amazing how where you live can limit your regular exposure to various roads. For example, since moving to Raleigh from Charlotte in 2003 - I may have been on I-77 north of Huntersville maybe twice.  But when I lived in the Charlotte area in 2001-03, I was on it often.  Same can be said for Interstate 95 between Interstate 40 and Rocky Mount.  Because I live in Raleigh - there's not really any need for me to travel that stretch of Interstate.  I can pick up 95 south in Benson and 95 North in Rocky Mount.


Once into Tennessee, and after a stop at the State Welcome Center to get a new state map, we headed North West on Interstate 26 towards Kingsport.  This was my first time on I-26 north of I-81 and we took that to it's end at US 11W.

US 11W is four lanes all the way to Bean Station. And it's a rather quick and uneventful route.  There are many old alignments that loop off the highway for those wishing to explore more.  In order to get Hancock County, Tennessee, we took a detour on TN 31 to TN 131 before making our way to US 25E North and Cumberland Gap. At Cumberland Gap, US 58 briefly enters Tennessee.  The photo below is proof of it from US 25E. 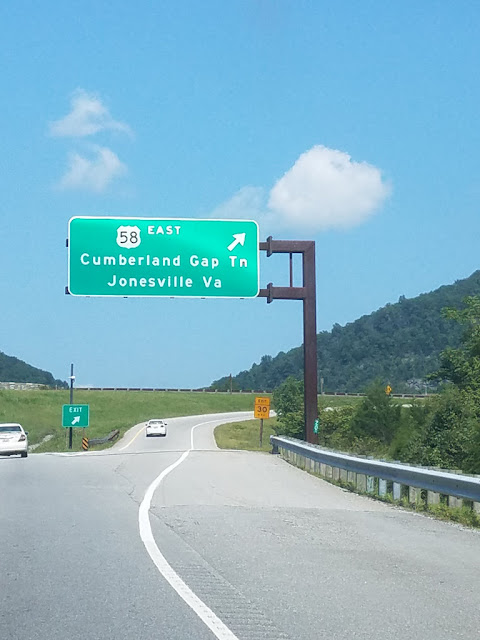 After making sure we completed US 58 in Tennessee, blink and you'll be in Virginia, we made our way into the Town of Cumberland Gap so we could hike to the actual gap and the Tri-State Peak. We decided to park at the Iron Furnace parking lot (which is interesting as the TN/VA state line pretty much goes through the parking lot) and hike from there.  The parking lot is the trail head for the Tennessee Road Trail which connects to the Wilderness Road Trail which leads to the physical Cumberland Gap. 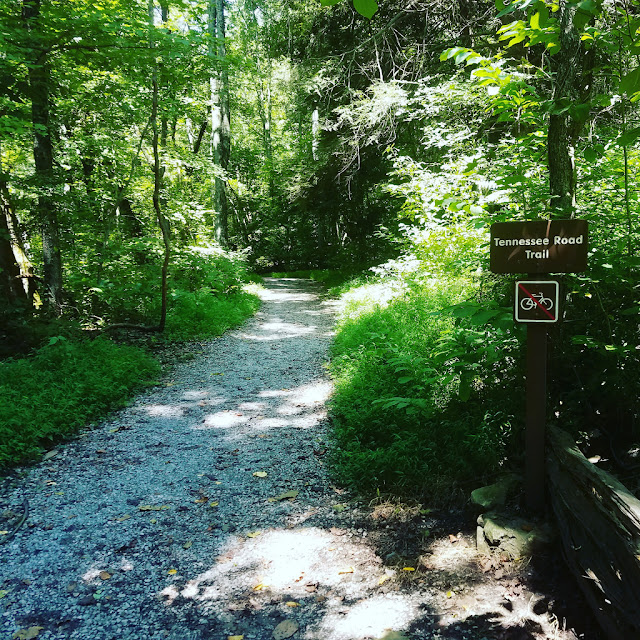 
Each was here in the Cumberland Gap and now so are you. 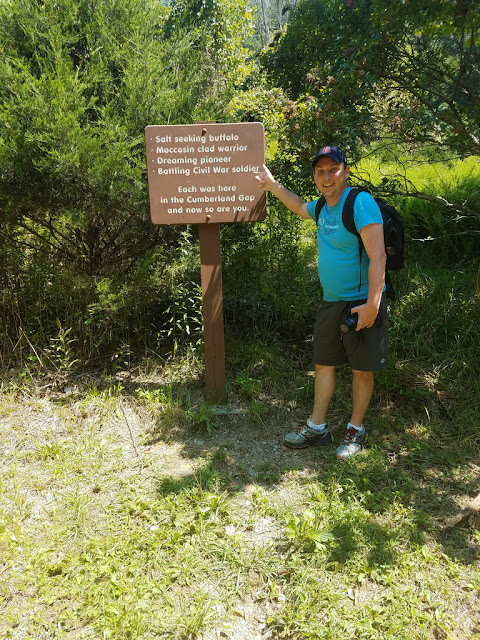 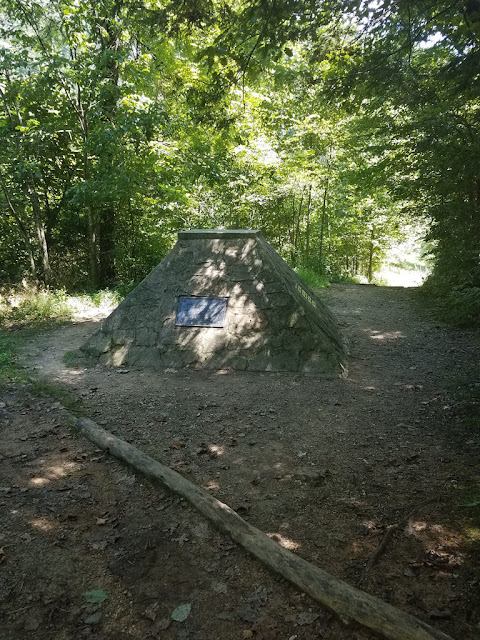 Knowing that US 25E just ran below this monument.  I have to wonder how was it and the Tri-State Peak accessed when cars and trucks were nearby.  Was there a pullover point and trailhead? Or did it sit neglected for years until the tunnel was built just to the south.  From here, it is an uphill hike - slight moderate - to the tri-point. 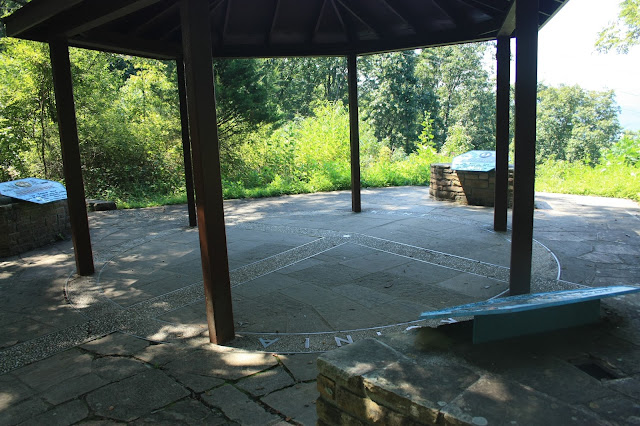 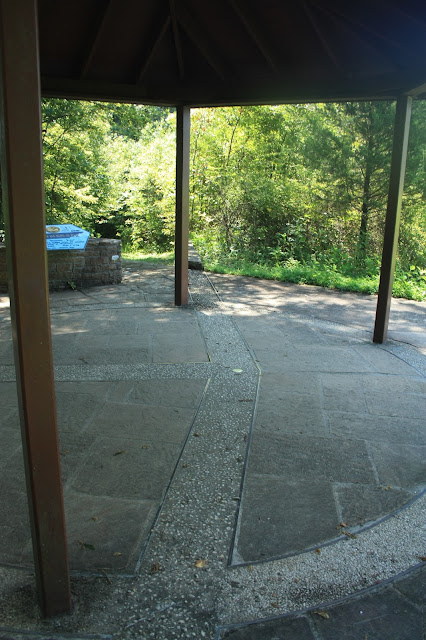 The Tri-Point is well maintained (be sure and sign the guestbook) and the brick pavers and stone walls depicting the state lines are very nice, but the views are underwhelming.  Panaoramic vistas are difficult and the best view looking west towards Middleboro is obstructed by high-tension wires. 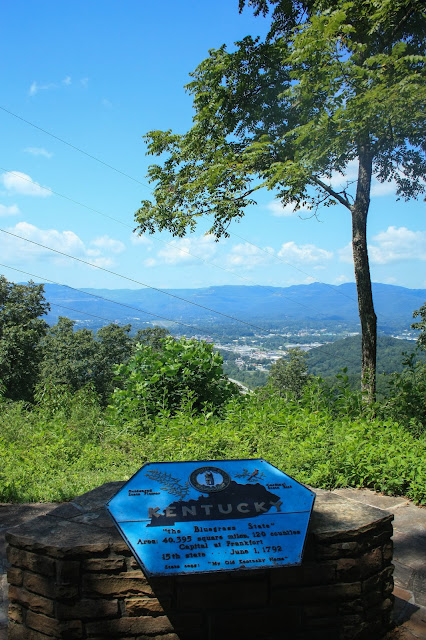 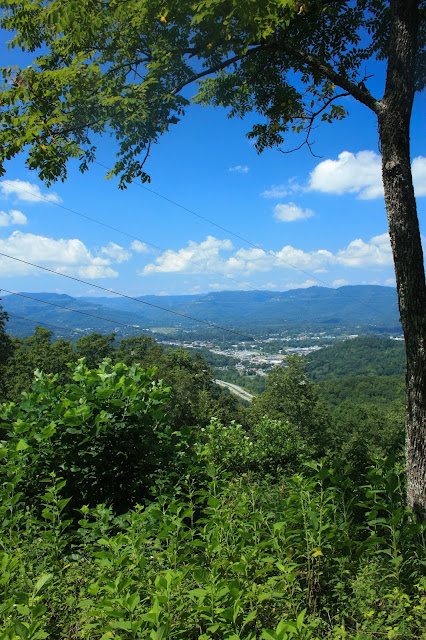 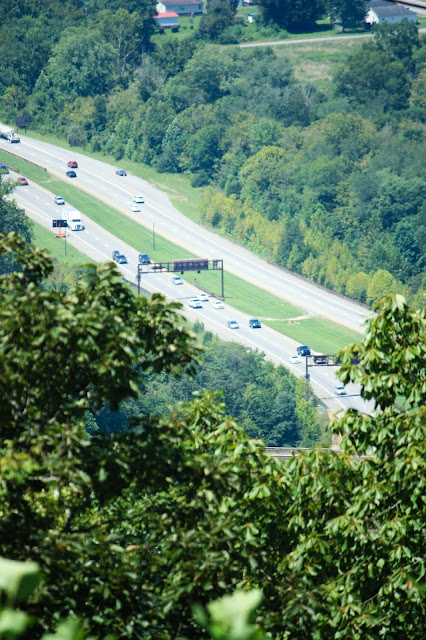 Overall our hike was 1.2 miles one way so just under 2.5 miles round trip.  It's uphill the way there but the reward is it's downhill the way back.  We did the hike including a few other stops and about ten or so minutes at the Tri-Point in about an hour and 10 minutes.

After the hike, it was time to explore the town of Cumberland Gap. And it was a nice small mountain town indeed. The original "Gateway to the West", this tiny town of about 500 residents sits right below the Cumberland Gap to the south in Tennessee. The town is home to a number of specialty shops, bed & breakfasts, and eateries.  It is popular with those spending a weekend adventuring outdoors or dayhikers like ourselves taking sometime to explore after a good hike. 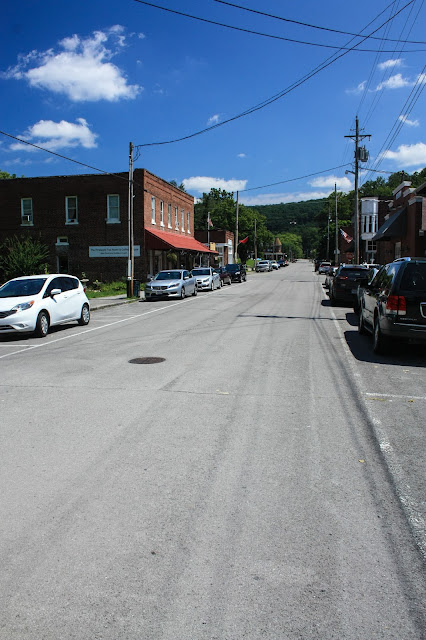 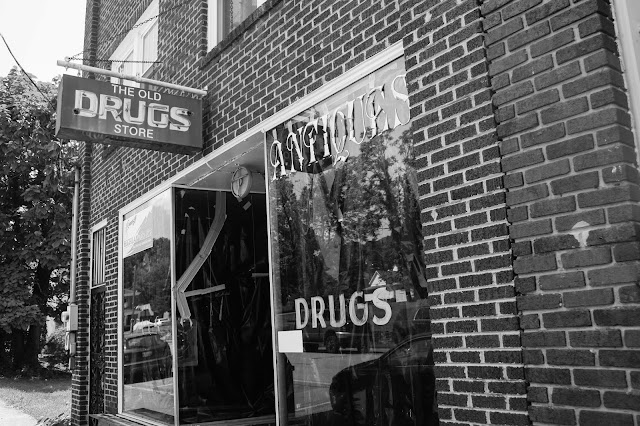 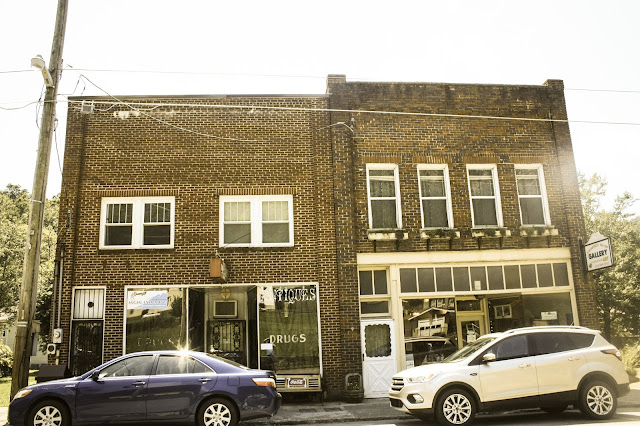 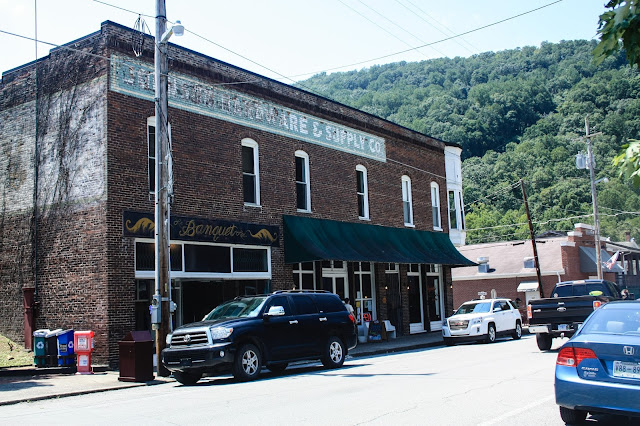 One of the more unique roadgeek finds in Tennessee sits in front of the Cumberland Gap Post Office - an old faded sign leftover from when US 25E was routed through the town still stands. 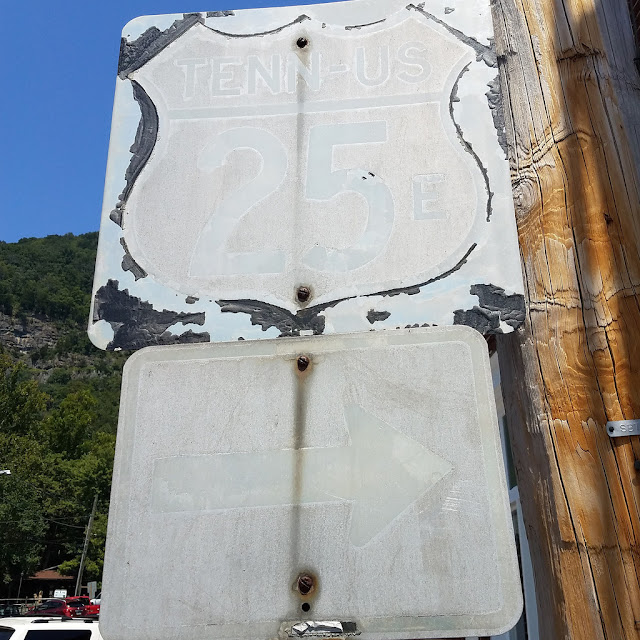 Cumberland Gap was bypassed first to the east in the 1970s when the four lane US 25E was built. It would later be also bypassed to the south when the Cumberland Gap Tunnel opened in 1996.  The barely legible sign has been known in the roadgeek hobby circles for some time.  I'm glad I was able to see it.  But unbeknownst to me, there was one more US 25E relic - not as interesting but definitely more legible - within town.  In front of the town hall, as the old road leaves town to head up the hill into Virginia, there's another US 25E sign. 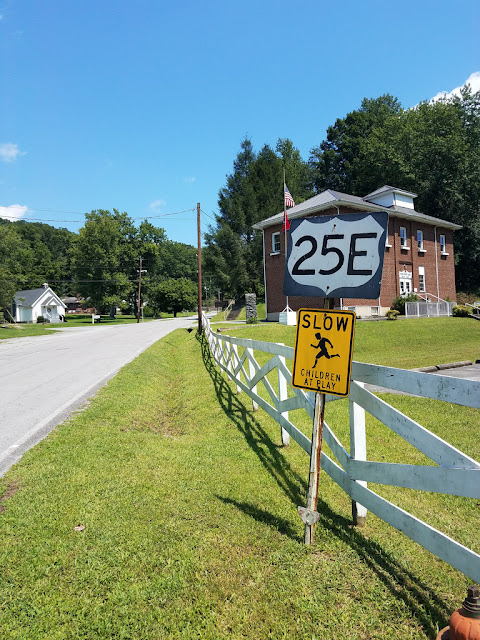 From this point, we began the long journey home.  There was one surprise left - and I'm kicking myself to this day for not stopping to eat here.  In Harlan, Kentucky, there is one of the few remaining Rax Restaurants in operation.  I grew up in Pittsburgh in the 1980s and they were awesome.  In fact, Rax was the subject of a recent Pittsburgh Dad episode on YouTube.

I talked myself out of stopping to eat there.  We had a long drive ahead and it was about 3pm when we went past it.  Why didn't I make us stop!!!  The funny thing is I would so be like the Pittsburgh Dad character calling friends from back home in PA if we had stopped.  I can still remember going to the Pleasant Hills and Belle Vernon Rax 30 years later.  The Salad Bar was great - but the chocolate chip cookie you got with the kids meal was pretty damn awesome.

Well, I guess next year's day trip will be back to Harlan, KY for a trip to Rax.  If there is one lesson from this trip, and you'd think I'd know this by now - it's worth taking the five minutes to make a stop because you'll spend a lot more time kicking yourself for not doing it.

Unknown said…
I lived at 310 Colwyn Ave Cumberland Gap for 8 years or so. I used to get ice cream at the old drug store when I was 14-16 and I became friends with the late original owner, Harvey. I'm forgetting his last name. Such a sad thing that happened to him. I lived in the apartments of the restaurant that was next to the PO. I worked at what used to be the Tea Room, which was across the street from the PO as well. I vacationed there every summer for years with my parents before we moved there in 2003. So many memories. Thanks so much for posting these photos! I am using them in a page in my bullet journal. I will give you credit if I post it to instagram!
2:21 PM

Adam said…
Awesome! Please let us know if you need larger photos for when you post and thanks for crediting us!