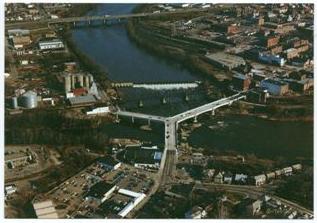 Zanesville, Ohio is home to one of the more unique bridges in the United States.  Situated at the confluence of the Licking and Muskingum Rivers, the 'Y' bridge consists of three 'legs' that meet over the rivers to form a Y.  As a result, it is possible to cross the bridge while beginning and ending on the same side of the river as you started from.  For over 200 years, five different versions of this unique bridge has crossed the two rivers in Zanesville.
The first 'Y' Bridge was built in 1814 - a wooden trestle style bridge - and lasted only four years.  In 1819, a new second bridge would be opened and would stand until it was condemned as unsafe 12 years later.  The third Y bridge consisted of three covered bridges and stood until 1900.

In 1902, the fourth version of the famous landmark was constructed and carried traffic until 1979.  It was this structure that led Amelia Earhart to say that Zanesville was, "the most recognizable city in the country."  The Main Street leg of structure had a lift span over the Muskingum River.  The above-grade superstructure of the lift was removed in 1973.  In 1979, the entire bridge structure was deemed unsafe and closed to vehicular traffic.  Construction on the fifth and current span began in 1983 with the new bridge opening to traffic in the fall of 1984.

The best vantage spot to see the 'Y' Bridge is from the Putnam Hill Park Overlook which sits just south of the bridge.