By Bob Malme December 26, 2011
It's been about a year since my last post and moving up to MA. Thought I'd reintroduce myself by posting on familiar topics from NC and then perhaps some new posts about recent road trips in the Boston area.

When I left NC in Nov. 2010, NCDOT was about to open the next segment of I-74/US 311 freeway near High Point. Adam provided a good summary of the road after it opened on November 2010. It hadn't changed much in my trip on the road in October. The last year has seen NCDOT contractors quietly continue progress on two I-73 and I-74 related projects in Randolph County. First is the extension of I-74 to US 220 (I-73) near Randleman. The second is the reconstruction of US 220 through the Asheboro area so it can be signed officially as I-73/74. Both these projects are to be completed in the fall of 2012, perhaps allowing I-73 and I-74 to be signed between Randleman and Asheboro.

Two more contracts are to be let this upcoming year for projects at either end of the current corridor. In February, the first segment of the US 220-NC 68 Connector project is going out to bid. This part (part C) will involve widening the current US 220 from the future Connector route at the Haw River north to NC 68 into an interstate highway. As part of the project, but unrelated to I-73, US 220 south toward Greensboro will be made into a 4-lane Expressway. The I-73 work will involve preliminary engineering at either end of the construction area to reroute US 220 onto ramps over the future Connector at the Haw River and to re-do the current intersection with NC 68 at the north end so that US 220 (future I-73) traffic is the through route. Currently if one wants to stay on US 220 South they must make a left turn off the 4-lane roadway which becomes NC 68. There will be no interchange built for NC 68 at this time, traffic entering from NC 68 will be controlled through a traffic light. Interchanges for US 158 and NC 65 will be built as well as part of the future US 220 interchange with I-73, as indicated above. There currently is a US 158 interchange, but it will have to be mostly rebuilt. Here's a photo of what the current US 220 roadway looked like in 2008 near NC 65: 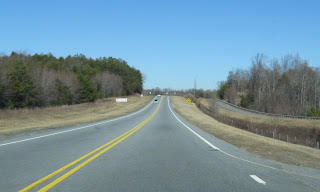 According to the project signage plans, the exit signs will not receive exit numbers until the rest of the connector is built and I-73 is officially extended north. The US 158 control cities will be Stokesdale and Reidsville. NC 65 will not have any cities listed on its exit sign, while the US 220 South exit sign will indicate Greensboro. This will be a right lane exit with US 220 south taking a ramp over the future I-73 roadbed while northbound US 220 will merge on the right to meet the I-73 highway heading north. The work on this section is to be completed by 2016 when work is to commence on parts A and B of the contract to build the Connector to NC 68. When that is complete, or concurrently, a connector route between NC 68 and Bryan Blvd will be built to finish the connection to the Greensboro Urban Loop, currently Future I-73/I-840.

The other contract also involves US 220. In this case the building of the US 220 Rockingham Bypass. Like the contract above, this project is split into 3 parts, the first, to upgrade US 220 from about five miles south of the current end of the I-73/74 US 220 freeway to where the Bypass will be built is currently planned to be let in November 2012. Plans have not been posted, but I believe at least one interchange is to be built between US 220 Business and the future bypass. Work is to start in early 2013 and should be complete by 2015.

The last new contract, to be let in early 2013, will upgrade the signing along the existing I-73/74 freeway north of Ellerbe to what is now Exit 51, the current end of Interstate 73. The only signage that truly substandard and needs to be replaced is on the old section of US 220 freeway south of Exit 39. The rest will be updated with new exit numbers to match I-73 mileage. The numbers need to be changed to match the I-73 milepost numbers that will be on the new signs in the Asheboro section when that project is completed. Where there are exit numbers, they will have to go up by 17 to account for the planned I-73 start at the SC border south of Hamlet. What is now Exit 51 will become Exit 68. For a complete list of new exit numbers in the Asheboro segment now under construction go to my I-73 Segment 8 page.

As for construction projects in 2011, the Asheboro segment construction is running ahead of schedule. From NCDOT's Construction Progress Report, as of the end of November the work was about 55% complete, they had projected about 45%. It is unknown whether the completion of the work while be coordinated with the I-74/US 311 project so that both are finished about the same time so that I-74 signage can be put up along the segment in between. Most of the work south of US 64 appeared to be done when I traveled through in mid-October. As shown in the photos below: 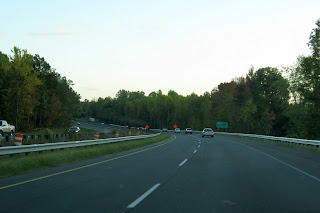 This is the view heading south on US 220 between McDowell Rd and Exit 51. There may be more work to be done with the median. 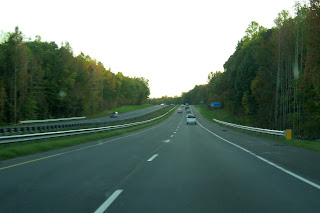 This is a view about a mile further south getting closer to Exit 51. Turning around... 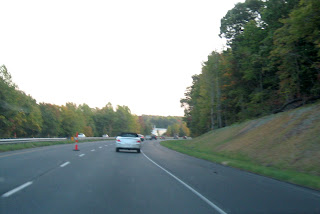 The lane was closed for some additional bridge work. NCDOT states in its TIMS traffic management system that work on this section could be completed in April of next year. Much more work though needs to be done north of US 64, though there were some signs of progress: 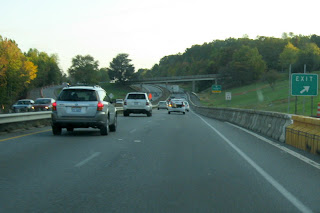 This is heading south on US 220 near the start of construction. Barriers have been placed down to allow for the widening of the right shoulder. Some portions have been completed with the addition of new guardrails: 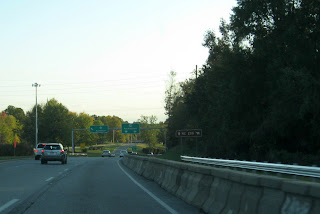 Notice that posts for new signage have been put up but no new exit signs or supports for new overhead signage, as above for the NC 42 exit. The situation is the same near US 64: 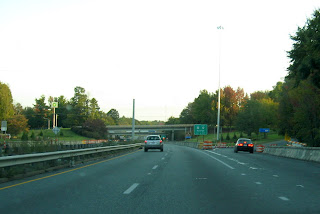 At least some of the US 64 exit overhead assemblies have been taken down, but there was no sign work was going on to replace them at the time.

In Part 2 I will summarize progress on the I-74 freeway and update news about the building of the beltway around Winston-Salem.