By Bob Malme December 29, 2011
While in the Raleigh/Durham area in October, I had a few hours to check out progress on building the Western Wake Freeway (NC 540) portion of the Triangle Expressway (TriEx). Work had largely been completed along the Triangle Parkway (NC 147) portion, but I was about 6 weeks too early to be able to drive on it. I did get to drive over and around it though on my way to NC 540. Here's the approach to the Hopson Road interchange area: 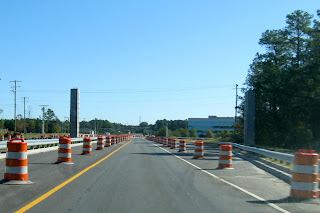 They were still working closer to the intersection at Davis Drive on a Saturday: 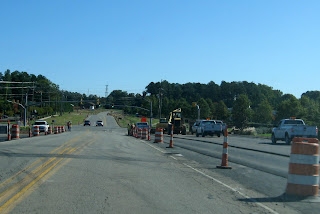 Turning right on Davis I proceeded to the Davis Drive interchange, a C/D ramp and signalized intersections connect the two interchanges together: Note the fancy brick face on the bridge approaches. Here's the approach on Davis from the other direction: 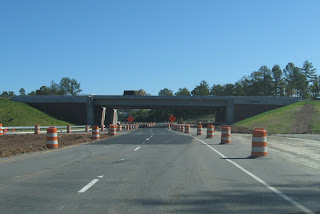 Since I could not use the Parkway, I had to approach NC 540 using I-40. Approaching the former Davis Drive exit on West 540 I got to see the future Triangle Expressway/Parkway interchange signs covered up: 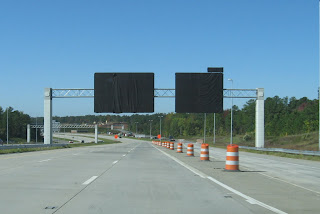 The content of these signs can be seen on Adam's post regarding the opening of the Triangle Parkway. Note the fancier sign support posts. I was glad they kept the revised exit numbers I helped NCDOT 'discover' when they opened NC 540. This was confirmed on my trip by seeing this new, but uncovered, sign for the NC 55 exit: 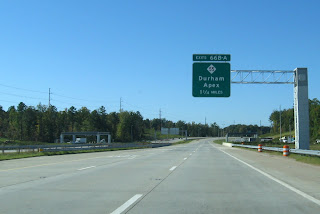 You can see one of the toll gantries for eastbound NC 540 traffic on the left.

Proceeding now to the unopened section on what will be South and North NC 540. From McCrimmon Parkway one can see the NC 55 interchange in the distance from the bridge opened in the Spring of 2011: 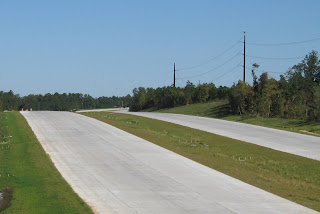 Panther Creek HS is to the right, along with their football stadium whose high bleachers would probably allow someone to make traffic reports on the TriEx next fall. With the exception of signage and line markings this section appears near completion. As does the section south of McCrimmon towards Carpenter Fire Station Road: 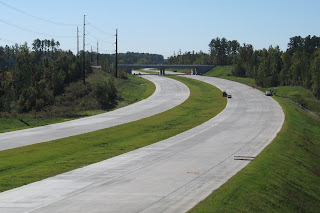 Some shoulder maintenance work was going on while I took these photos. The next image shows the view back towards McCrimmon Parkway from the bridge in the distance above: 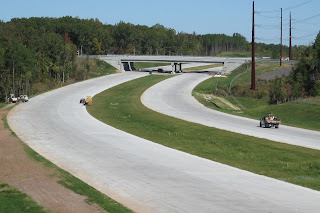 The view south from the Carpenter Fire Station bridge shows a similar stage of Tri-Ex completion down to Green Level School Road: 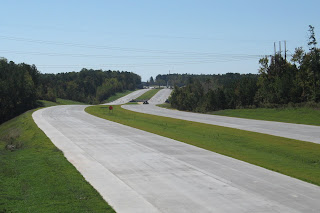 The next stop was the USA Baseball Complex in Cary, in particular the parking lot which borders the Tri-Ex southbound. Here's a view north toward the Green Level School Bridge: 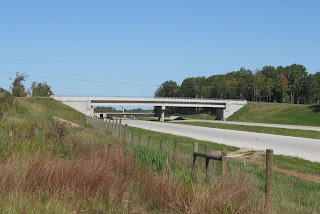 The construction contractors have kept the shoulder and median grasses mowed, wish I could say the same for the baseball folks. Had to do a little jungle fighting to get the photo below which looks further south. Same stage of completion here as farther north: 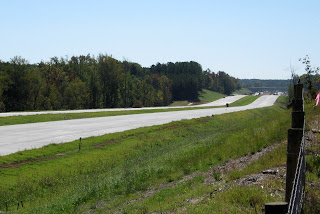 The Green Level West bridge and future interchange are in the distance and the next stop. They were still working on the road in this location: Looking south it appeared some more concrete work needed to be done on the northbound lanes. They also were working on the on and off ramps north of the bridge: 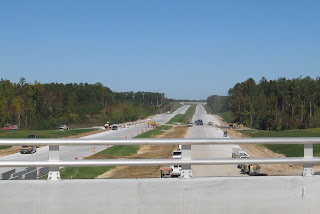 The bridge had only recently been opened and was wide enough to carry four lanes of through traffic and at least one lane for left-hand turns onto the TriEx ramps: 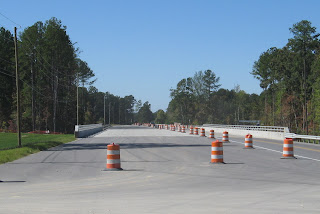 This is a closeup view of the future northbound NC 540 onramp: 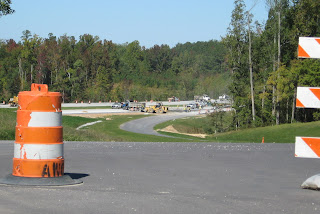 The concrete stopped along the roadbed between this future interchange and the Jenks Road bridge just north of US 64. This bridge had just been opened the week before. Unfortunately, this is the best view of the roadway construction I could get. This road connects Jenks to the Mall near the corner of NC 55 and US 64: 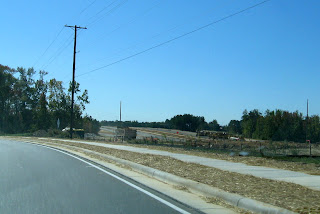 The lanes here just have a preliminary asphalt covering heading south toward the US 64 bridge. This the view approaching the bridge on US 64 West: 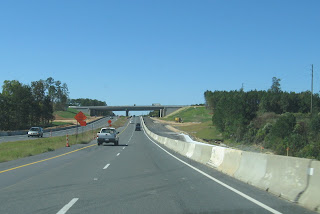 Approach lanes to the off ramps have been created, but the ramps are still awaiting pavement. Here's the view from south of the US 64 bridge: 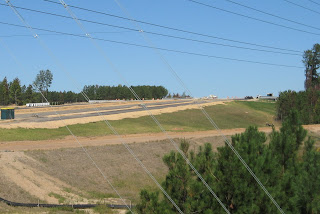 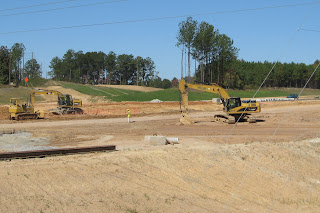 I had a wedding to prepare for, so I could not check out the rest of the TriEx corridor down to the NC 55 Bypass in Apex. The rest of the highway corridor has been cleared and work is proceeding on grading, if not paving, some of the sections of the future roadway. There have been occasional lane closings on US 1 and a detour on Old US 1 implying work on bridges to cross these roadways is proceeding. Grading has been completed at the NC 55 Bypass.

From what I saw, it appears that the NCTA will be able to open NC 540 as far as US 64 by next summer as planned, the rest is due to be opened by the end of 2012. I hope to get down again to the area hopefully as early as after the first section is open.

Meanwhile, maps, updates and photos of construction progress can be found, if not at Gribblenation, then at the NCTA Western Wake Freeway site.